To protect her secret

The early childhood of Creepie is mainly described in "Creepie Crawling". When she was a child, she was found under the porch of the Dweezwold mansion by the insects that lived there. Insects loved and cared for Creepie by feeding, grooming, and so on. Her adopters, a praying mantis and a mosquito from Madagascar, called her Creepie and were her ultimate gaurdians. Growing up, Creepie began to wonder why she was not growing wings or an exoskeleton like her family.

Her mother and father knew that she should go with her fellows, so they prepared her by teaching her so that she could go to Middleton Middle School. Once ready, Creepie went to school for the first time and met Chris Alice, who greeted him with joy. As she greeted Creepie, she accidentally threw her into the fountain and Creepie washed in the girl's room. She asked her family of insects to help her, frightening the other girls in the room. She also met Budge.

Creepie is a young middle school girl (Approximately 13 or 14 years old) with a goth sense of fashion and personality. She also has very pale skin and usually speaks in a low husky voice, though if excited or frightened, her voice goes higher in pitch. She usually wears a black dress with pink sleeves and tights (right arm left leg have black stripes), purple lipstick and eyeshadow with large shiny eyes with pink irises. Her hair is multi-colored, with blue, red, orange, pink, and yellow. The pigtails She wears are rather short and the left is radioactive yellow and the other is fuchsia. Both hair strands on that and right side of her head are baby blue, and her back hair from her forehead down are red and orange. Though in "Attack of the Wasp Zombies", she is seen for a second with black hair.

Creepie is shown to be kindhearted, caring and mild-mannered, but can also be shown as sarcastic and cynical especially around people she considers rude or obnoxious. She is very smart, resourceful and creative, showing courage most of the time. It is not the kind to take away the harm done to insects and, possibly, also to nature. Unless the circontaces require it.

Creepie loves her family and is afraid of clowns. 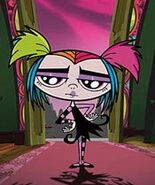 Add a photo to this gallery
Retrieved from "https://hero.fandom.com/wiki/Creepie_Creecher?oldid=1691251"
Community content is available under CC-BY-SA unless otherwise noted.