Michael J. "Crocodile" Dundee (Alias Mick) is an Australian crocodile hunter. He's the husband of Sue Charlton and the father of Michael "Mikey" Dundee. He is portrayed by none other than Paul Hogan.

Supposedly Dundee was born in a cave within the Australian Outback where he was found and raised by a tribe of Aborigines. Growing up, he asked what year he was born and only one explained that he was born in the summertime. He owned a bit of land that was called "Billongamick" (Literally meaning "Mick's Place") which is 3-4 days travel. The only reason why he kept it is because it has a gold mine which is to be his so called "Retirement Fund".

Dundee lived in the Outback for most of his life until he met up with Sue Charlton, who came to Australia from New York in order to do a story about Dundee. She heard an exaggerated legend about the famed crocodile hunter who got his leg torn off by a crocodile and traveled about a 100 miles or so back to civilization and lived. Upon meeting Dundee, she realizes that his leg is not torn off, but is badly scarred which Dundee refers to as a "Love Bite".

Despite his advances and opinions, Dundee and Charlton grow remarkably close especially when he saves her from getting attacked by a crocodile back in Australia. She then takes him to New York where he explains that he's never been to a city before. Even out of his native homeland, one example would be when he shows a group of thugs what a real knife looks like when they try to rob him.

During his time in New York, Dundee also finds that Charlton is engaged and is going to be married soon, however she then breaks off her engagement to live with the man who stole her heart and that is Dundee.

Moved to New York then Back to the Outback

After a year Dundee and Sue live happily together in New York where he tries to make use of his former lifestyle. It's also the time when Sue is sent evidence by her ex-husband whom is killed by a Colombian Drug Cartel who discover him. They soon track the evidence down to Sue and kidnap her. This of course leads Dundee on a rescue mission which proves successful.

After retrieving Sue, the two head back to Australia in order to fight the cartel on his territory. This of course leads them to defeating the cartel and staying in Australia.

13 years later, Dundee and Sue are a happy couple, living in Australia where they have become parents to their son Michael "Mikey" Dundee. Now deemed illegal to kill saltwater crocodiles, Dundee works as a crocodile wrestler for the tourists. At the same time, Sue is then brought on to work at her father's newspaper for a person who died under mysterious circumstances.

Dundee soon finds that the reporter was investigating on the set to the sequel of a movie called Lethal Agent, spotting several different types of paintings possibly for drug smuggling. He then finds that the paintings were stolen from an museum in Yugoslavia thought lost in the recent civil wars. After finding this out, Dundee, Sue and Dundee's rival Jacko are confronted by the director and his thugs. This of course leads to the final show down between the thugs and Dundee. The trio succeed in capturing the thugs, solving the case and then return to Australia. Dundee and Sue of course are now finally married.

Crocodile Dundee is a surprisingly fit Caucasian male with blond hair. He is known to have a tan due to him living in the Australian Outback for so long. Dundee seems to be in his 30s, possibly 40s or 50s despite his age never really being mentioned. He is known to have a thick Australian accent and despite supposedly being born in the Outback, Dundee is known to be very well dressed for the climate. He sports usually t-shirts and jeans, but he's nowhere without his iconic black hat. His hat is an all black bushwalker hat with a band that goes around the hat's top over the brim with genuine crocodile teeth placed around it.

He's also been seen wearing a uniquely designed suede tan jacket with parts of it being composed of genuine crocodile skin. This was probably custom made by Dundee during his life. On one of his legs, he is known to wear a pair of boots as well.

Dundee is shown to have a number of amazing abilities that he has utilized as a hunter. Despite his physique, he has been shown to be surprisingly strong. He's shown to be strong enough to actually wrestle and even kill crocodiles. He's shown to have a way of intimidating his enemies as well, clearly this was seen when some common street thugs tried to rob him. His intimidation skills have also helped him in instances such as when he scared off a bunch of Kangaroo hunters in Australia and even when he stopped a jumper in New York. As a hunter, Dundee has also shown his expertise in the use of weapons such as knives and even explosives.

Aside from the use of his knife and explosives, Dundee is shown to be a natural with the use of firearms as well. In the third film, Dundee has shown to have a superb set of detective skills, which he used to find the stolen paintings thought lost in Yugoslavia. He's also got a skill in the use of operating vehicles as well. Throughout his visits outside of Australia, Dundee has shown to have a very great deal of charisma. This makes him able to make friends very quickly.

Dundee is known to have carried a large hunting knife on his person. He used this weapon when he saved Sue from a saltwater crocodile. It's powerful and sharp enough to actually go through the rough scale skin of a crocodile and Dundee can twist it inside as well. He also wears a sheath composed completely out of crocodile skin which is usually where his knife is placed. Even in the big city, Dundee carries the knife on him for protective purposes and has shown use with it against a couple of common street thugs when they threatened him with the use of a switchblade.

When not carrying a knife, Dundee has been shown to carry explosives when it comes to blast fishing. In the second film, he used them in order to catch some fish just in time for breakfast. Aside from the usage of a knife and explosives, Dundee is known to also carry a custom Enfield 303 Sporter Rifle. It's also made clear that he's a smoker, so Dundee is also known to carry a pack of cigarettes and a cigarette lighter.

Dundee is known to have the heart of a true gentleman despite his several sexist opinions. He is known to also have an excellent sense of humor even when it comes to the most serious of circumstances. He's also shown to be a very brave man, which is a clear aspect of his personality seen in the movies. He's also known to be a caring man as well as serious man at that. Dundee is also shown to be somewhat crazy by some standards, however it's because he's somewhat crazy that makes him a brave soul.

That's not a Knife

Dundee and Sue are walking along the streets of New York where they bump into a regular guy who asks for a light. Dundee happy to oblige tries giving him a light, but then backs away when the man takes out a switchblade. Demanding his wallet, Sue tells him to give them his wallet, however after asking why, Sue replies "He's got a knife". Dundee chuckles and responds with "That's not a knife" and without hesitation takes out his large hunting knife saying "That's a knife".

Dundee would slice the left sleeve of one of the thugs red leather jacket without causing any injury as Dundee grins, waiting for them to make a move. Intimidated by Dundee, the thugs decide to leave before any harm could befall them. This of course leads to Sue and Dundee to kiss.

Dundee's Knife & Sheeth.
Add a photo to this gallery 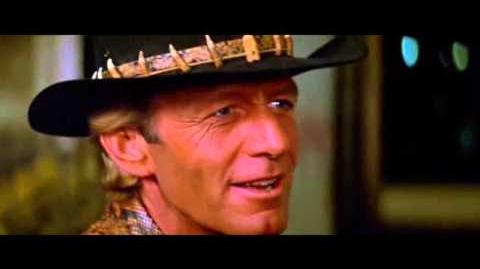 That's not a knife
Scene as described above.
Add a photo to this gallery
Retrieved from "https://hero.fandom.com/wiki/Crocodile_Dundee?oldid=1716648"
Community content is available under CC-BY-SA unless otherwise noted.