Resident of the Porong Porong Village

Crong is one of the main characters of the animated Korean series, Pororo the Little Penguin. He is Pororo 's best friend and adoptive younger brother. He was born from an egg found by Pororo, who was scared of him at first, but later became friends with him and adopted him.

Crong is voiced by Lee Mi-Ja in the Korean version, and Cathy Weseluck in the English version.

Crong is depicted being a troublemaker. He likes playing tricks on his friends, especially to his adoptive older brother Pororo. They both bricker a lot and Crong even disappears from his house at times, which worries Pororo.

He communicates by saying his name repeatly, but until Season 2, he started saying various words, starting from the episode "Crong's first word".

Despite being a troublemaker, Crong is kind and tries his best to help his friends, though he goofs a lot to them.

In Season 1-2, like the others, Crong was naked. He is a green, baby dinosaur. In Season 3-present, Crong wears a light blue aviator jumpsuit, a red bandana and matching gloves. 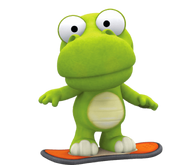 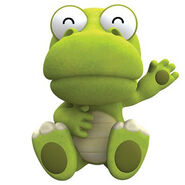