Going to the Millennial Fair.

Crono is the main character of the video-game Chrono Trigger, a game originally part of the Super Nintendo library.

Crono is a young boy who lives in the year 1000 AD and routinely practices fighting monsters and doing odd jobs for his neighbors. During his town's Millennial Fair Crono meets a girl called Marle and introduces her to his best friend, Lucca, a child genius who is at the Fair displaying her newly crafted teleportation device. Due to an unforeseen catalyst on Marle's person the machine is accidentally teleports her back in time instead of to the predesignated area a few feet away. Crono goes back in time to rescue Marle. Crono winds

Crono winds up in the Middle Ages. Crono finds Marle in the castle posing as the queen Leena. Marle calls for Crono to meet her privately and reveals who she is. Furthermore, Marle is actually princess Nadia. Queen Leena was her ancestor and Nadia has inherited her looks. The queen had been kidnapped recently in the past, and so Nadia took her place in order to maintain the peace. Howevr Nadia soon fades away. When guards come to investigate Crono is presumed responsible for her disappearance and arrest him. Crono begins to break-out of prison and is joined by Lucca, who had finished repairs to her machine and traveled back after him and Marle. Lucca explains the grandfather paradox, that since Marle took queen Leena's place no one had saved her, leading likely to her death and thus Nadia was never born. Upon breaking out of jail completely, Crono and Lucca go off to save queen Leena. Leena had been kidnapped by the demi-human Yakra. Yakra was a shape-shifter who had disguised himself as the royal chancellor and used the opportunity to rule the kingdom while the king grieved.

Return to the Present

With Yakra defeated and Leena freed, Marle returns to existence and the three return home. Nadia introduces Crono and Lucca to her father immediately has her confined to her room upon returning and has Crono arrested for "kidnapping" her. Crono is put on trial, and depending on the players choices may be found guilty of innocent. But even if found innocent, the royal chancellor has Crono locked away to satify the King. Crono escapes with the help of Nadia and Lucca and the threes escape pursuit thanks to triggering further dimensional tears as time gates.

Crono, Marle an Lucca end up in the distant future where the world is in ruins. They meet a robot Lucca reactivates and calls "Robo". With Robo as their guide, they travel through the future to find historical records of how the world ended up in the state it did. In the year 2,000 AD a monster called Lavos, wiped out all civilization and destroyed most of the planet. Armed with the knowledge of what is to come in their future and with the discovery that they can travel through time thanks to their initial exposure, Crono, Marle and Lucca end up on an epic quest to save the planet through judicious use of time travel.

Crono was born into the Lightning element which manifests as electrokinesis. Aside from some light lightning magic, Crono relies mostly on his sword-skill. Though he is of a European setting, Crono wields his blade closer to that of a samurai and prefers a katana like blade. Crono is excessively strong for a youth and works-out frequently, making him one of the strongest characters in the party, right behind Ayla later in the game. 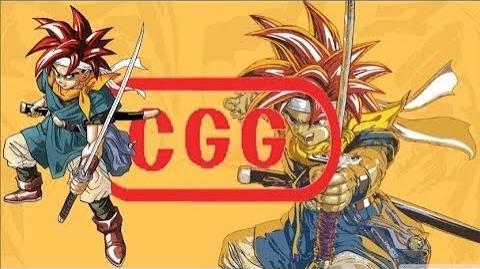 PowerCrunch How Strong is Crono (Feat. William Proto) Re-Upload
Add a photo to this gallery

Crono as he appears for the Playstation version 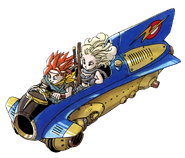 Crono piloting the Jetbike with Ayla enjoying the ride 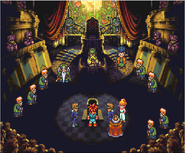 Crono being taken away during his trial, whatever found guilty or innocent matters not.
Add a photo to this gallery

Retrieved from "https://hero.fandom.com/wiki/Crono?oldid=1843200"
Community content is available under CC-BY-SA unless otherwise noted.