Zeus' Father,
Lord of the Titans,
Titan of Time and Harvest

Leader of the Titans,


Ruler of the universe (formerly)

Kill his father so he can rule the universe (succeeded),


Eat all of his children,
Kill the Olympian Gods,
Aid Kratos in his journey to kill Zeus (formerly),
Kill Kratos (all failed)

Cronos was the son of Ouranos and Gaia, and had many siblings, such as Hyperion, Rhea, and Alecto, and was born on the Island of Creation. Cronos ruled the titans and the universe after overthrowing his father, but heard of a prophecy where he be overthrown by his children, and proceeded to eat them whole to prevent so. Rhea, disgusted with Cronos' actions, allowed her son Zeus live, giving him to Gaia as Cronos ate a stone. Zeus eventually became of age, claiming his vengeance by freeing his brother and sisters, and declared war against the titans.

The mighty Atlas was the leader of the Titans in their epic battle against the gods. Mountains were hurled like pebbles and tremendous earthquakes shook the world. Cronos had almost been defeated, but was saved by Atlas, who was defeated by both Hades and Poseidon. After Zeus created the Blade of Olympus, the Titans were banished to the darkest pits of Tartarus to endure great suffering for all time, but Cronos would be granted another great fate in time.

A carving found in the Desert Ruins, showing the Temple being chained on his back punished Cronos by forcing him to wander the Desert of Lost Souls with Pandora's Temple chained to his back. The whirling sands may have one day ripped the very flesh from Cronos' bones, but he was given no sympathy. When the Titan Horn would be blown, Cronos would be called upon to allow countless warriors to endure the many dangers which lurked within the temple. Above all warriors, Kratos, the Ghost of Sparta, was responsible for completing the many feats within the temple and even retrieving Pandora's Box.

Kratos also discovered the magic Cronos had hidden within the Steeds of Time. This magic, called Cronos' Rage, allowed Kratos to electrify his enemies much like Poseidon's Rage. Nothing else is known about the Titan other than the fact that he was responsible for destroying his own father, starting a vicious cycle. This cycle was between fathers being destroyed by their sons, much like Kratos tried to do when he fought Zeus upon the Summit of Sacrifice.

Kratos is sent by Hephaestus to retrieve the Omphalos Stone from Cronos' stomach, so that he could continue his journey to kill Zeus. Arriving in Tartarus, Kratos makes his way to Gaia's hand (as he had dismembered it), and Cronos confronts the demigod for his actions. In addition, Cronos states that Kratos is the reason he suffers, as he had collected Pandora's Box, Zeus became consumed with fear, and punished his father to the pits of Tartarus.

When Kratos defends himself that he was doing a task for the Gods, Cronos responds that he did the task for his need of vengeance, and states that he can have his by killing Kratos. Cronos attempts to crush Kratos, but he battles the titan by using Helios' head to blind him. Kratos then proceeds to maneuver around the titan, but Cronos eventually catches up wit him, and swallows him, and the cyclops whole. Kratos survives being swallowed, and uses the Blade of Olympus to cut Cronos' intestines out, retrieving the stone.

Kratos then proceeds to break the crystalized shackles, impaling him in the jaw before going on the top of Cronos' forehead. Cronos mocks Kratos, calling him a coward before attempting to stop the demigod from killing him, to no avail. Kratos plunges the Blade of Olympus into the titan's head, causing him immense pain, collapsing to his death.

Like his youngest son, Zeus, Cronos showed himself to be power hungry and deeply paranoid, eating his children to prevent himself from being overthrown. In addition, he usurped and killed his father just so he could rule the universe, similar to how his children would overthrow him during the great war. However, unlike his son, he cared for his titan brethren, as he wanted to kill Kratos for killing his mother, Gaia.

Cronos also didn't underestimate Kratos, as he believed that Kratos had killed his mother, knowing he would be the only one who could. This also stemmed for his deep hatred for the Spartan, as Kratos caused his punishment in Tartarus for getting Pandora's Box. Despite this, Cronos was arrogant and hypocritical, calling Kratos a "coward for killing his own kin", as he murdered his father to rule the universe, and swallowed his children so that he wouldn't be overthrown. 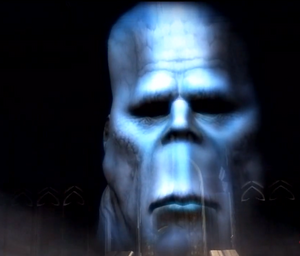 Cronos in God of War II. 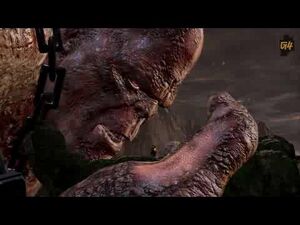 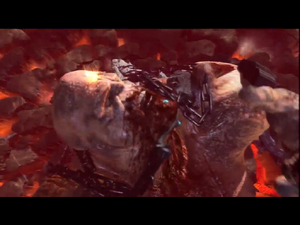