Get revenge on Baroness von Hellman for killing her adoptive mother.

She is a young aspiring fashion designer who seeks revenge against her birth mother Baroness von Hellman for the death of her adoptive mother Catherine. She is an adaptation of the character of the same name from Disney's 101 Dalmations. This version of her is much more commiserative than the original version of her adaptation with the similar name.

She was portrayed by Emma Stone who also played Olive Penderghast in Easy A, Eugenia "Skeeter" Phelan in The Help, Gwen Stacy in The Amazing Spider-Man duology, and also voiced Eep Crood in The Croods.

A rebellious young woman with a mean streak her mother dubbed "Cruella". After the death of her mother, Estella falls in with Jasper and Horace and becomes a grifter, but her dreams of becoming a fashion designer come to fruition when she is noticed by the famous Baroness von Hellman.

Estella was born in the 1950s to the Baron and Baroness von Hellman, the former of whom was overjoyed and the latter of whom was enraged at the thought of giving another living thing more attention than herself, almost immediately from her birth Estella had a noticeable peculiarity, with her hair being equally split as black and white. On the day of Estella's birth the Baron was away on a business trip and his wife used this to her advantage the Baroness ordered her butler John to kill Estella, not wanting to take on the responsibility of looking after a child, secretly however John instead gave the baby as well as the necklace and key to the box containing the documents revealing her true heritage to the maid Catherine so she could live and be raised in a loving home. The Baroness lied to her father that she had suffered a miscarriage, causing the Baron to die from a broken heart.

Catherine fled from the Baroness's home and raised Estella to be a polite and kind young girl who kept her head down and hid her talents to a reasonable extent from the world. This became difficult during Estella's school time however where she was bullied and frequently caught up in fights, culminating in her headmaster eventually expelling her, before he could officially announce this however Catherine told him she was withdrawing her from the school by choice. Catherine planned to take Estella to London and the two decided to come up with a future plan when they arrived. Before heading for the city however Catherine decided to stop off at the Baroness' mansion to ask for financial support making sure to remove her necklace and give it to Estella first so the Baroness wouldn't realize the girl's true heritage. After noticing who's house they were at Estella decided to explore and look around at the Baroness's party before eventually being caught by John thanks to her dog Buddy running loose. As John was trying to escort Estella discretely out of the mansion the Baroness's Dalmatians soon noticed her and began pursuing her. The chase brought Estella outside and she hid behind a bush. Unfortunately for Estella however the Baroness whistled for her dogs to come for Catherine which they did, knocking her over a balcony leaving her to fall to her death. As Estella didn't fully see what happened she mistakenly believed Catherine's death was her fault since she distracted by the Dalmatians and she fled the scene to London, feeling immense remorse over what had happened.

The following morning she met two street urchins Jasper & Horace who felt sympathy for her and decided to take her in as a member of their gang. In order to disguise her true identity, Estella dyed her hair red and continued working as a thief with the duo for the remainder of her childhood.

10 years later, Estella is making ends meet alongside Jasper and Horace as thieves, while honing her fashion skills by designing their disguises. For her birthday, Jasper and Horace get her a job at the Liberty department store, but only as a cleaner and Estella is denied access to hone her skills. A drunken Estella remakes one of the window displays and lands a coveted job with the Baroness, who is a renowned but authoritarian haute couture designer. Estella gains the Baroness' confidence but eventually notices her boss wearing a necklace that once belonged to Catherine. After the Baroness claims an employee had previously stolen it, Estella asks Jasper and Horace to retrieve the necklace.

Estella, in order to conceal her identity, creates an alternate ego of herself under her nickname "Cruella", donning her natural hair color and wearing one of the baronesses old designs, purchased from a vintage clothing store owner named Artie, whom she has befriended. "Cruella" crashes one of the Baroness' parties to steal the necklace, but when the Baroness uses a whistle to command her Dalmatians, Estella realizes that she used the same whistle to direct her dogs to murder Catherine. Seeking revenge for her mother's death, Estella taunts the Baroness by appearing at her gatherings and upstaging her as Cruella in flamboyant outfits, designed with intention to humiliate the Baroness. Her antics gain publicity through her childhood friend Anita, a gossip columnist. Cruella's haughty and arrogant behavior increasingly angers Jasper and Horace, as well as the Baroness, who fires her lawyer Roger for failing to stop Cruella. Estella also kidnaps the Baroness' Dalmatians after one of them accidentally swallows her mother's necklace.

Estella sabotages the Baroness' spring collection show using south American moths (smuggled into the building as gold embroidery). Simultaneously, she stages her own show in Regent's Park. Having deduced that Estella and Cruella are one and the same, the Baroness has Jasper and Horace arrested and ties up Estella, leaving her to die in a fire. Estella is rescued by the Baroness' valet John, who reveals the necklace is a key to a box containing Estella's birth records. She discovers that the Baroness is her biological mother, and had ordered John to have the infant Estella killed so she could focus solely on her career and keep her late husband's inheritance. John instead gave the baby to Catherine, one of the Baroness' maids, who raised Estella in secret. Estella is angered by Catherine's deception but eventually makes peace with the truth in an effort to complete her vengeance, adopting the name Cruella for good, and telling her adopted mother how much she loved her.

Cruella breaks Jasper and Horace out of jail, recruiting them and Artie for her final scheme. They refuse at first, but Cruella apologizes for how she treated them, and tells them that they are her family. The brothers accept her apology, and they decide to plan their heist.

They sneak into the Baroness' charity gala, where the guests dress as Cruella in honor of her death, much to the Baroness’ annoyance. The Baroness is lead outside, where Cruella (dressed as Estella) reveals to the Baroness that she is her abandoned daughter. The Baroness pretends to show remorse for her actions and asks to hug her before pushing her over a cliff, unaware her guests had been led outside and witnessed the event. Cruella survives the fall using a parachute built into her clothing and discards her Estella disguise before returning to witness the Baroness being arrested. Having adopted the last name de Vil, Cruella inherits Hellman Hall (shortening it to Hell Hall) as its rightful biological heir.

In her childhood, Estella was initially tough, abrasive and confident, unafraid to speak her mind or fight to defend herself, however following her mother's death and due to a desire to live on as she would have wanted her to Estella became rather meek, shy and passive in her adolescence although still had an unmistakable amount of intelligence. Over the course of the film, and as she learns more about what really happened to her adoptive mother, Estella becomes more and more confident and assertive once again, and she fully embraces the identity of Cruella De Vil.

As Cruella, she was sadistic and ruthless, but also quite playful and eccentric, with an over enunciated manner of speaking and became far more bossy and rude than she was previously. Ultimately she was driven out of a desire for vengeance, and although upset when she learned of her true heritage and the deception of her adoptive mother, she relented out of love for her and still targeted her sights on her biological mother, the Baroness, who she grew to resent and hate as the film went on. Although quite unstable, Cruella was a very intelligent, creative, pragmatic and quick-thinking individual who managed to stay one step ahead of the Baroness for the majority of the film thanks to her cleverness.

In spite of her negative traits, Cruella did still have more redeeming qualities than any other version of her depicted. She genuinely cared deeply about Jasper and Horace and viewed them as her closest companions and only family. She also managed to maintain several friendships and get along with others well such as with Artie, Anita and ultimately John when she learns of his true intentions.

Estella was a slim and tall woman with beautiful features and green eyes. Her skin was very pale and this was enunciated when she fully embraced herself as Cruella by her makeup which was very bold and striking, with her favouring black, white and red in terms of colours. As Estella she sometimes wore glasses although appeared to have decent enough vision without them.

As both Estella and Cruella, she had a keen eye for fashion and almost always wore incredibly extravagant, distinguishing and flashy outfits with her usual black, white & red motifs. Over the course of the film she wears 47 distinct outfits.

Estella was born with hair that was split down the middle as black and white and retained this throughout most of her childhood until meeting Jasper and Horace when she decided to dye her hair red to distance herself from her original identity. Upon adopting the persona of Cruella, she decided to allow her hair to return to its natural black & white form. 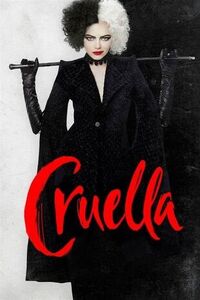