Defeat Jackson Storm in Florida 500 and win the race (succeeded).

Cruz Ramirez is the deuteragonist of the 2017 Disney/Pixar film Cars 3.

She is a racing trainer, later racer, who helps Lightning McQueen get his racing mojo back so he can defeat Jackson Storm.

She is voiced by Cristela Alonzo.

Initially, she is recruited by Lightning McQueen to help him train for the upcoming Florida 500 and defeat a rookie named Jackson Storm. After a series of unsuccessful attempts to train McQueen at the Rust-eze Racing Center, the two participate in a series of events including unwittingly entering and winning in demolition derby and training at Thomasville with Doc Hudson's former mentor, Smokey. She races in the Florida 500 herself as McQueen's replacement sporting his number, which she eventually wins jointly with McQueen. After the race, she politely turns down Sterling's offer to join the race team, possibly in retaliation for underestimating her skills and joins Dinoco's racing team sporting Doc Hudson's old number (51), with McQueen serving as her crew chief.

Cruz appears as one of the game's playable characters. 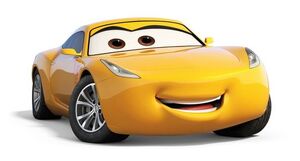 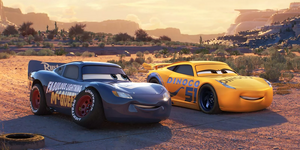 Cruz with the "Fabulous Lightning McQueen"