Sometime during The Rebellion

The Crystal Gems also referred as the Rebels, are the heroic faction in the animated series Steven Universe. They are apart of a species of beings known as Gems and are a splinter faction of the Homeworld Gems.

The Crystal Gems were formed about 5,000 years ago by Rose Quartz to protect Earth from magical threats. All members of the group are part of an alien race known as "Gems". The current members are Garnet, Amethyst, Pearl, Steven, Peridot, Connie, Bismuth, and Lapis Lazuli. Steven is Rose Quartz's son. Due to Gems lacking any sex organs, Rose shapeshifted a womb for her son to be born from and died due to passing on her gem to him.

Pink Diamond had begged the other Diamonds for a colony of her own until she was finally allowed to have one. Pink chose Earth to be her colony, and like any other Diamond, she sent her Gems to the planet to begin building structures and Kindergartens. The Prime Kindergarten and other structures were successfully established, but Pink soon discovered the life that lived on Earth. She grew fascinated by humans and other lifeforms and knew that if the colony was completed, the Kindergartens would drain all of the life force from the Earth and destroy all life that lived there. Pink attempted to reason with the other Diamonds as to why they could not complete the colony, but when they did not listen, Pink created an alter-ego named Rose Quartz through shape-shifting. Rose Quartz would be used to start a rebellion in an attempt to save the Earth, and nobody would know that it was Pink Diamond behind it all. Pink Diamond (as Rose Quartz) and her Pearl rebelled, founding the Crystal Gems.

Rose explained to Pearl that by joining her, they could never go home, and if they were caught, they would be killed, which Pearl accepted. At the Ancient Sky Arena, Pearl familiarized herself with the human concept of being a knight and using swords. Later on, Blue Diamond established her court on Earth with the goal of shattering Rose and Pearl for their rebellion. Ruby and Sapphire assisted Blue Diamond and fought against the rebels, but in an effort to save Sapphire from Pearl, Ruby accidentally fused with her, an act that is disgusting to Homeworld Gems. Because of this, Ruby was to be shattered for fusing with the high ranking Sapphire, but the two manage to get away. After spending a lot of time together and developing romantic feelings for each other, Ruby and Sapphire fuse again, and Garnet is accepted into the Crystal Gems. Over time, Rose amassed an army and was able to connect with many Gems who shared her same ideals, such as Bismuth. At the Prime Kindergarten, Rose gave a speech to the other Quartzes, asking if them if what they wanted was to inject Gems and build structures. She also asks if they will destroy the life that's already on Earth or join it. Rose's message got around and resonated with many Gems. Pink Diamond's empathy towards the Earth and beliefs about the Kindergarten's injustice instigated her to defect from her fellow Gems; she truly cared for every form of life on the planet. Another reason that Pink formed the Crystal Gems was that she disagreed with how Homeworld's society ran; she believed that Gems shouldn't have to do what the Diamonds wanted them to do, but instead choose their own lives and fate. When the Crystal Gems began to make themselves known, Pink Diamond told Yellow and Blue at the Moon Base that the colony couldn't be completed because of them, but they still would not listen. Because of this, Pink Diamond decided to wage war against Homeworld in order to save the Earth.

The Rebellion officially begins against the Gem Homeworld. Little is known about the ensuing war. Many battles were fought and took place in different locations all over Earth, such as the Ancient Sky Arena, the Cloud Arena, and the Strawberry Battlefield. According to Eyeball, Rose was able to keep her army in contention with Homeworld's superior army because of her healing abilities. Bismuth mentions how she and Garnet took on a battalion of Quartz soldiers together, and how she and Pearl stopped a drop ship when Pearl threw the Nephrite pilot out of the ship. Bismuth supplied the Crystal Gems with weapons that she created in her forge, and Rose kept most of them in her armory. Around this time, Rose and Bismuth had a fall out due to conflicting ideas, leading Rose to bubble Bismuth and tell the Crystal Gems that she was lost at the "Battle of the Ziggurat". It is believed that humans also fought alongside the Crystal Gems.

Around this time, Pink Diamond no longer wanted anything to do with Homeworld or her duties as a Diamond. With Pearl, Pink Diamond crushed up dirt and turned it into pink shards. Pink ate the shards and then had Pearl shapeshift into Rose and pretend to shatter her in front of other Gems. From that point on, Pink Diamond was now able to live freely as Rose and Pearl belonged to nobody.

At this point, Earth is no longer seen as a viable colony to Homeworld. With one final effort to wipe out the Crystal Gems, the Diamonds unleashed the Corrupting Light, corrupting any Gems exposed to the blast. Rose was able to protect herself, Garnet, and Pearl from becoming corrupted with her shield.

The remaining Crystal Gems used their abilities to defend Earth from countless threats. As Rose wished, the Crystal Gems contained the Corrupted Gems in bubbles. Rose made it the Crystal Gems' mission to one day figure out how to cure Corrupted Gems. The Crystal Gems also met and recruited Amethyst, who popped out of the Prime Kindergarten too late to fight in the Rebellion. After falling in love with Greg Universe, Rose, a great admirer of humanity, gave up her physical form to give birth to a half-human child, Steven Universe. The other remaining Crystal Gems (Garnet, Amethyst, and Pearl) have taken it upon themselves to raise him alongside Greg and teach him how to use his powers.

With Homeworld gaining new interest in Earth, Steven and the Crystal Gems continue to protect humanity and contain Corrupted Gems. In "I Am My Mom" and the Steven Universe Podcast, is shown that the Diamonds know that the Crystal Gems are still active but have apparently decided to just leave them alone and they aren't imagining the Crystal Gems will be an intelligent adversary, as all lifeforms Gems have encountered up to this point weren't difficult to overcome.

The following is the Manifesto of Rose Quartz, revealed by Pearl in The Guide to the Crystal Gems:

"Fight for life on the planet Earth,

Defend all human beings, even the ones that you don't understand,

Believe in love that is out of anyone's control,

And then risk everything for it!"

The Crystal Gems evidently own a section of Beach City's shoreline, on which the Crystal Temple and Steven's Beach House resides. Lapis Lazuli and Peridot currently live in the Barn which resides on a hill outside of Beach City. The Barn belongs to Greg and his cousin Andy, but the Gems have effectively taken ownership, using it as a house for new members and to build any required machinery such as The Universe Mach 3 and the Gem Drill. Lapis Lazuli and Peridot formerly lived in the Barn which used to reside on a hill outside of Beach City. In "Raising the Barn", fearing the threat of a diamond attack, Lapis took the barn with her to the moon where it stayed until "Can't Go Back". The barn is currently a wreckage on the beach as of "Reunited". Steven and the Crystal Gems temporary lives in his mother's old room in her palace where Pink Diamond's old little friends the Pebbles lived at Gem Homeworld.

Though technically belonging to Steven, Lion occasionally acts as transport for the Crystal Gems to places they cannot warp to, such as the Moon Base. As of "Bubbled", they now also own a Roaming Eye ship that the Rubies left behind, although it was stolen back by Navy in "Room for Ruby". They also sometimes use the Gem Sloop for traveling at sea, though it hasn't been seen since "Cat Fingers". As of "Legs From Here to Homeworld", Steven has gained access to his mother's personal ship and palanquin.

Unbeknownst to Garnet, Amethyst, Peridot, and Lapis Lazuli, they also have an Armory containing more Laser Light Cannons and other various weaponry. They also have a Forge which can be used by their blacksmith, Bismuth. 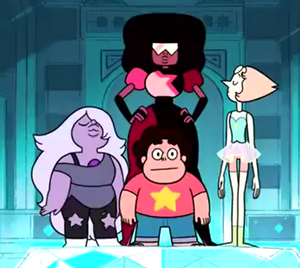 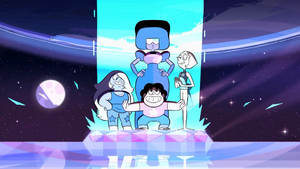 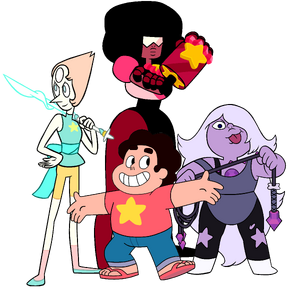 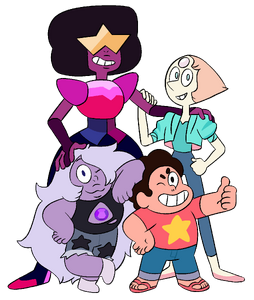 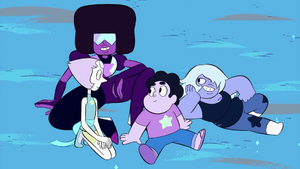 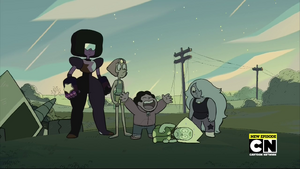 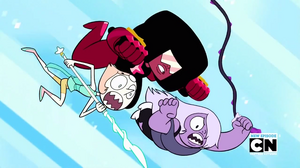 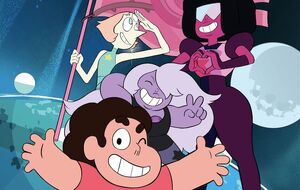 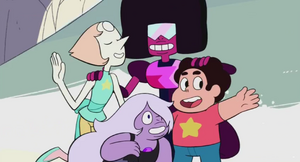 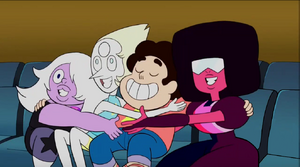 Crystal Gems in "The Grampies" 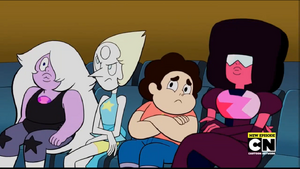 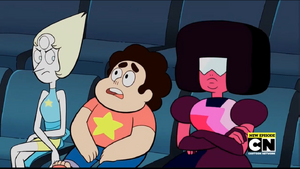 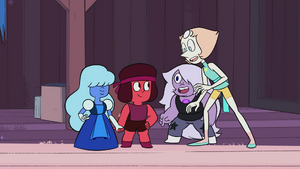 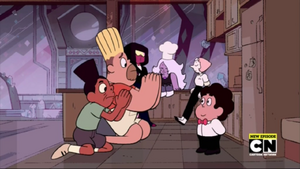 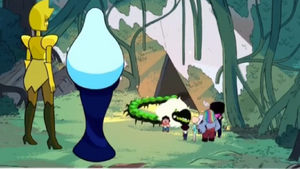 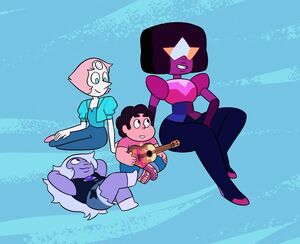 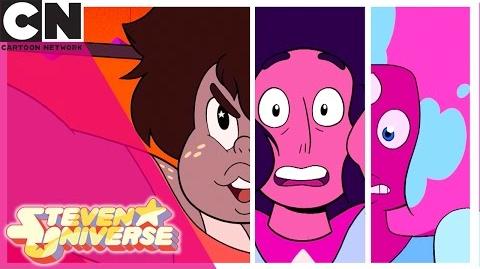 
Cite error: <ref> tags exist, but no <references/> tag was found
Retrieved from "https://hero.fandom.com/wiki/Crystal_Gems?oldid=1710195"
Community content is available under CC-BY-SA unless otherwise noted.