Going on adventures with Cavin, Sunni, and Tummi

To become a Gummi knight

Adventurer
Cubbi Gummi is one of the main characters of Disney's Adventures of the Gummi Bears. He is the youngest member of Gummi Glen who quickly befriends Cavin. He is voiced by Noelle North, who also voices Princess Calla.

Cubbi is part of a small caretaker colony of Gummi Bears who were left to guard Gummi Glen. He is incredibly curious and has a tendency to get distracted by the mysterious or the exciting. Of all the bears, he is the youngest and the smallest. Because of his age, his opinion is sometimes overlooked during discussions. Cubbi dreams of becoming a great Gummi Knight. He later becomes best friends with the human, Cavin, who shares the dream of becoming a knight.

In the series pilot, Cubbi is the first Gummi encountered by Cavin. Alongside the other Gummi Bears, he would come to secretly assist in the protection of the nearby kingdom of Dunwyn from the villanous Duke Igthorn.

Cubbi later creates an alter ego called the "Crimson Avenger", cape and mask-wearing vigilante who protects Dunwyn by night. The Crimson Avenger appears throughout the remainder of the series. In the episode "Up, Up, and Away", Cubbi is offered the opportunity to travel in a flying ship with a gummi named Chummi, who is trying to find the Great Gummis. Like Cubbi, Chummi was the youngest Gummi in his group, which led to becoming the last Gummi. While the other Gummis eventually turn down the offer, Cubbi accepts because meeting with the Great Gummis means that he could train to be a knight. However, Cubbi later turns down the offer, as he can't leave the other Gummi's behind. Instead, Cubbi tells Chummi to let the Great Gummis know about the Gummi Glen Gummis. 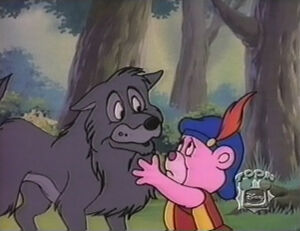 Cubby releasing the wolf into the wild
Community content is available under CC-BY-SA unless otherwise noted.
Advertisement