Cubix: Robots For Everyone

Stop Dr. K from taking over the world (season 1)

Robot
Cubix is a friendly and helpful robot and is owned by Connor. He can transform into a variety of different types of vehicles, including a hover bike, an airplane, and a helicopter. He can even fly without the need to transform into a vehicle.

His body is made out of a number of cubes. Hidden in each cube is a different gadget with a solution to almost every dire situation. When it comes to fighting, Cubix is exceptionally strong. He is powered by a Solex generator which is rumored to be the ultimate power source, but nobody knows exactly how it works. Cubix's body is also constructed out of a highly resistant metal that is capable of withstanding devastating amounts of damage without breaking.

At the start of the series, he is broken and no one can figure out how to make him work. However, the idea of friendship seems to be a key concept in order to activate him, because when Connor says the word "friend" at the moment of saying goodbye to him after trying to fix him with no results, he starts to repeat this word inside of his head, clearly generating some kind of response to this word. Connor then brings Cubix back to life and gains access into the 'Botties'. Later, he shuts down due to running out of Solex, but he absorbs more Solex after an explosion of it and reboots again.

Cubix initially lacks speech capability (probably because he might be a prototype or old model, or because his Solex banks were not filled enough to allow 100% operation), while speaking seems to be commonplace among other robots. Usually he just repeats what people around him say. However, later in the series after he absorbs Solex and reboots this improves greatly and he becomes capable of forming sentences and dialogues.

Cubix has a power up module with additional parts that when added to his structure drastically increases his strength and speed. However the added parts require a massive amount of power when installed and must be removed within three minutes of activation or Cubix's power source will overload and he will blow up.

Cubix's transformation process can be interfered with, allowing another modular robot to add his own parts into Cubix when he transforms. Kilobot has done this when Cubix was changing into his normal configuration by adding his parts into Cubix's form, thus merged into him forming "Kilo-Cubix". 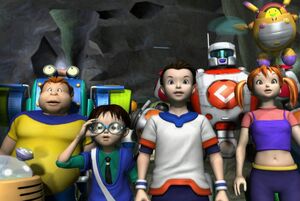 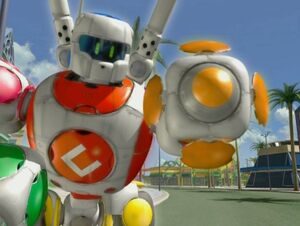 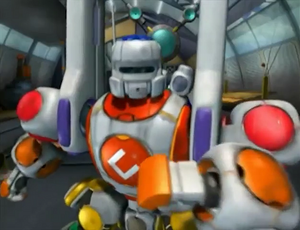 Add a photo to this gallery
Retrieved from "https://hero.fandom.com/wiki/Cubix?oldid=1866612"
Community content is available under CC-BY-SA unless otherwise noted.