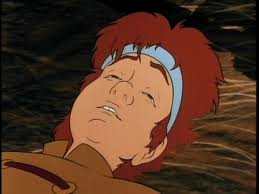 Curdie is a handsome young boy who is about twelve years old. He has reddish brown hair, brown eyes and fair skin. He wears a blue headband on his head. He wears a green long sleeved shirt with a brown belt, dark green pants and brown shoes.

In The Princess and the Goblin

He is a son of a miner who knows about the goblins (like everybody except people from the castle, Princess Irene being the first, as she learned it from him). He is first heard singing "A Spark Inside Us" to shoo goblin pets away. He then finds Irene crying, and he takes Irene back to the castle. As he does, he explains that the goblins aren't so bad if she knows how to deal with them; maybe they're a little creepy, but instead of running away, she should face them and sing, but even singing won't work underground, in the mines (because that's where they live). He drops her off, and is shocked to find out that she is a princess when he hears Looti call her name (as Irene is about to kiss him). It is when Curdie is leaving that she finds out what his name is.

Later, Curdie is seen going to the mines with his father, explaining his story. His father warns him to look out for the evil goblins, and warns him that if they want something, even his singing won't stop them. As Curdie tries helping load rocks into the mining carts, he then rests, only for that giant rock to fall and to land in a cart being driven by two goblins named Mump and Glump (the former being his voice actor, Roy Kinnear's last acting role due to his death approximately four years before the film's release). Curdie, of course, shows sympathy for the one giant goblin creature because that one is being slave-driven due to Mump whipping it with a snake-like goblin. Curdie overhears the goblins' conversation, hearing of Prince Froglip (the principal adversary/antagonist) and finding out that stamping on their feet is how to hurt them. He overhears the goblin King and Queen planning to flood the mines, and their son, Froglip, plan to kidnap the "sun people" (as they call humans) and bring them underground for them to eat the dirt from under Froglip's fingernails. Curdie goes off to warn his dad of the plan, but keeps hiding. Curdie's father finds him hiding, and Curdie (presumably) warns him of the plan.

Later, as Curdie's mother explains to her husband about "following the thread" and tells him to wait until morning, Curdie sneaks with it, only to have reached the end of the thread before heading to find out and lose it. He keeps going over waterfalls and is saved by the one sympathetic goblin. He then goes to overhear Froglip's plan, which is to marry Irene in order to "become king of the sun people." He then falls into where the goblins are and then fights the goblins off. He uses a stone club on as many, ending with the Goblin Queen (who is wearing stone shoes). Instead of breaking the Goblin Queen's shoes, though, he ends up breaking the club. He is then violently kicked and shoved into an underground cave. Curdie sings his song, but he is sealed into the opening by a heavy boulder. Then, he continues singing softly until Irene finds him with her great-great-grandmother's thread. She rescues him by taking him back where she followed the thread, but he doesn't see the thread, and doesn't believe it exists or that her great-great grandmother exists either. As she does, he takes off one of the sleeping Goblin Queen's shoes, revealing her feet each have six toes. But due to Irene's cat sniffing and licking that foot, he doesn't manage to take the other shoe off, thus waking her, the king, and the other goblins up (even Froglip). After he is rescued and Irene tries taking him to see her great-great grandmother, he thinks she is making it up. He goes off to warn the widowed king of the goblins' plan.

As he does, he ends up getting wounded by two soldiers (who don't mean it, as they mistook him for a goblin due to his shadow). The soldiers then take him into a cellar where he is later healed by Great-Great-Grandmother Irene. Finally, he starts believing in her and goes off to tell Irene that he is about to fight them off. He is not at all aware that Prince Froglip is following him into the room, where the latter kidnaps Irene.

Later, Curdie stamps on the feet of the goblins, and tells one of the wounded soldiers to stamp on their feet, as they can't be hurt anywhere else, and to sing, as they hate that sound. He and the soldiers continue fighting them off, until the Goblin Queen stomps on Curdie's foot with her remaining stone shoe. They keep fighting until they both hit a barrel of wine, and Curdie puts two hoops over her and lands her where her shod foot is on a rock smasher, which Curdie smashes the remaining shoe, leaving the Queen completely barefoot. When the King congratulates him, Turnip (Irene's cat) brings Curdie a trace of Irene's dress, causing him to look all over the castle for her. Later, as the mines are being flooded (and so will the castle be), he warns the soldiers to get out of the castle quickly.

Later, Curdie rescues Princess Irene from falling over a waterfall from the flood (due to a strong current), and fights off Froglip, who tries breaking his back and restraining him. As soon as Irene punches Froglip's foot and the latter loses his balance, Curdie kicks him off the rock, prompting him to fall to his death, and he pulls Irene back onto the rock and apologizes for not believing her. He is then reminded of their first meeting, and Irene kisses him. Curdie is finally reunited with his parents and he, Irene, and the soldiers sing.

In The Princess and Curdie

four years after the first film, he and his family are saying thier goodbyes to the king and his daughter.