Curly Brace is a secondary protagonist of Cave Story. She, like Quote, is an armed scout robot, built to resemble a human girl.

She was voiced by Chihiro Yamamoto in Blade Strangers and Crystal Crisis.

Curly Brace wears a short tank top, baggy cargo pants that stop at her shins, and short combat boots. Like Quote, she has antenna/headphone-like "ears" attached to her head. She has white "skin", long blonde hair and blue eyes.

Like Quote, she's a combat robot sent from the surface. She's more than competent in battle as a result. Her machine gun can generate enough recoil to carry her into the air, and she has zero problems wielding it

Curly Brace is optimistic and cheery, and expresses joy when lending a hand. Likewise, she is extremely protective of the people she cares about, going as far as to attack Quote to defend the Colons from harm. She is willing to sacrifice herself for the people she trusts, as shown when she gives Quote her Air Tank, allowing herself to drown in his place. 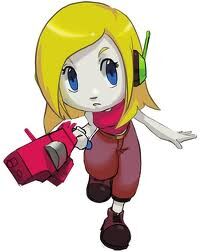