Cut Man is a robot master from the original Mega Man series. He appears as a boss in the first game and a unlockable character in the remake Mega Man: Powered Up.

Cuts Man is a Robot Master designed for timber felling. He is able to move nimbly with a lightweight chassis even in windy and stormy weather. His Special Weapon is the razor-sharp Rolling Cutter, which acts as a boomerang. Though he's cunning, he's also rather stubborn and tends not to listen to others. Like Guts Man, Cut Man isn't a main character, but is one of the Robot Masters who reappears often.

Cut Man appears as a playable character in the remake of the original Mega Man. 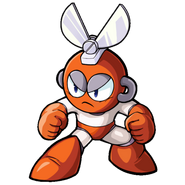 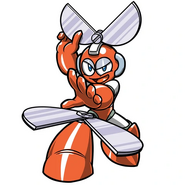