The adventures of Tintin

Helping the world and his friends with his inventions

Calculus is a genius, who demonstrates himself throughout the series to be an expert in many fields of science, holding two PhDs in Nuclear and Theoretical Physics and calculus, and an MSc in Planetary astronomy. He is also an experienced engineer, archaeologist, biologist and chemist. Many of his inventions precede or mirror similar technological developments in the real world (most notably the moon rocket, but also his failed attempt at creating a colour television set). He seeks to benefit mankind through his inventions, developing Stopalcol, a pill that cures alcoholism by making alcohol unpalatable to the patient, and refusing under great duress to yield his talents to producing weapons of mass destruction. Much of Calculus's more dangerous work is criticized by Captain Haddock, although Calculus usually interprets this the other way round; his deafness often leads him to misinterpret Haddock's words, preventing him from hearing his real opinion.

When he first appeares in Red Rackham's Treasure, Calculus is living in an apartment which he mainly uses as a lab. Later he maintains a laboratory at Marlinspike Hall, in which he conducts various experiments. He is fairly protective of his work, on occasion hiding his scientific endeavours from Tintin and Haddock (which gets him into trouble in The Calculus Affair). His lab is also stripped of all its apparatus in the same book. On an earlier occasion, during his efforts to find an antidote to Formula Fourteen in Land of Black Gold, Calculus almost destroyed half of Marlinspike Hall in an explosion.

Although generally mild-mannered, Calculus flies into an uncharacteristic rage if he feels insulted or ridiculed. He is especially provoked if he ever hears the Captain (or anyone else) call him a "goat." On one famous occasion in Destination Moon, he displays uncontrollable ire ("Goat, am I?") when an irritated Haddock accuses him of "acting the goat" by attempting to build a Moon rocket. His subsequent tirade and blatant disregard for security terrifies the usually ebullient Captain, and he even lifts the director of security barring his way onto a coat rack. (In the original French, "faire le zouave" sets him off, not an exact translation of "acting the goat" but roughly meaning "acting the idiot". In the 1960 American Golden Press edition, the offending phrase is "acting like a goat".)

Another occasion is in Flight 714 when, due to some misunderstanding, he physically assaults Laszlo Carriedas and has to be held back with great effort by Haddock and Tintin. Despite his gentle nature, Calculus is rather sensitive about his work and does not appreciate being ridiculed or belittled for his scientific efforts. His beard, moustache and hair also seem to be spiked every time he is angry. 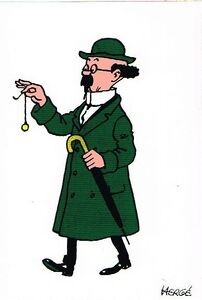 Add a photo to this gallery
Retrieved from "https://hero.fandom.com/wiki/Cuthbert_Calculus?oldid=2106502"
Community content is available under CC-BY-SA unless otherwise noted.