Heroes Wiki
Register
Don't have an account?
Sign In
Advertisement
in: Female, Cartoon Heroes, My Little Pony Heroes,
and 34 more

The Cutie Mark Crusaders (or CMC for short) are group of supporting characters from My Little Pony: Friendship is Magic.

In Crusaders of the Lost Mark, the Crusaders assist Pipsqueak when he runs for class president against Diamond Tiara. After Diamond Tiara loses the election, they learn that she acts the way she does because of the high standards imposed by her mother Spoiled Rich. The Crusaders reach out to Diamond Tiara in friendship, and it is through their help that Diamond Tiara finally stands up to her overbearing mother. The Crusaders come to realize that helping others discover their true talents is more important than realizing their own. With this revelation, the three finally gain their cutie marks. While they all have shields, they also have different symbols. 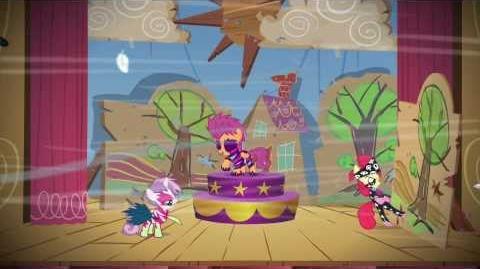