Cyan also known as Cyan Hijirikawa in the anime, is a member of the band Plasmagica and the main protagonist of the series.

She is voiced by Eri Inagawa in the Japanese version and Bryn Apprill in the English version, the latter of whom also voices Hiyori Iki, and Kotori Itsuka.

Cyan is a white female myuumon with black cat ears and tail and yellow eyes with navy blue pupils. Her outfit consists of a navy and white ruffled lolita dress and a white maid hat on her curly dark blue hair. A large pink bow and silver bell hang around her neck which eventually becomes gold upon evolving. She striped stockings with platform baby doll shoes. In her humanoid form her eyes are emerald green.

In the anime, before getting sucked into the game, she was a normal human who wore red rimmed glasses with her school uniform and had straight hair that ended at her shoulders.

She has been seen as childish sometimes but is very dedicated to music.

In the anime, Cyan is shy, which is shown when she couldn't muster the courage to apply for the music band she wanted to join. She joins Plasmagica after getting sucked into Sound World, and expresses immediate excitement about becoming a musician. She becomes fast friends with ChuChu, Moa, and Retoree, the latter of whom develops a crush on her. She soon finds out that she has been chosen to save Sound World, and cannot leave until she does. Cyan accepts this duty with enthusiasm after some confusion. 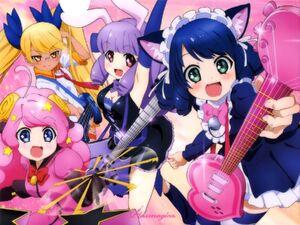 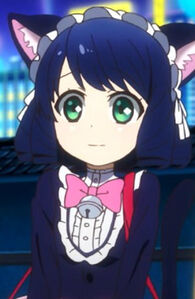 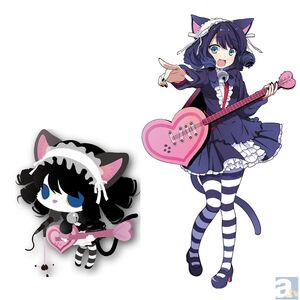 Retrieved from "https://hero.fandom.com/wiki/Cyan_(Show_by_Rock!!)?oldid=1857227"
Community content is available under CC-BY-SA unless otherwise noted.