Focusing on her job.

The Order
The Brethren

Cybil Bennett is the deuteragonist of Silent Hill. She is also a playable protagonist in Silent Hill: Play Novel, appears in the film adaptation, and is re-imagined in Silent Hill: Shattered Memories. She quickly befriends Harry Mason and attempts to help him to find his missing daughter, Cheryl.

Cybil is a very tough and strong-willed cop, usually reserved and calm during stressful situations. Under her high demeanor, she can perceive things as casual that would normally shock or surprise the average person (when Harry awoke and Cybil just smiled).

Cybil is also very loyal and courageous to the task at hand, going as far as to risk her life to save Cheryl and assist Harry.

Cybil is a skeptic and and has difficulty accepting the paranormal activity in town. She is heavily against occult secrets and believes that the people are either crazy or on drugs.

Cybil Bennett is a police officer from Brahms, a town neighboring Silent Hill. She is sent to Silent Hill to investigate her precinct's lack of communication with the Silent Hill Police and is unwittingly drawn into its strange world.

The Play Novel reveals more of Cybil's backstory. When Cybil was a little girl, her parents were murdered by an unidentified man. Cybil, who was hiding in a closet at the time, looked through the closet's crack and witnessed her parents being shot in the head. This incident largely impacted her future, which was the main influence on her becoming a police officer.

Before entering the town, Harry sees Cybil riding by on her motorcycle while he is driving with his daughter. Shortly before crashing his Jeep, he spots the bike again, lying abandoned by the roadside. Cybil also crashed due to Alessa Gillespie's astral projection.

After being ambushed by monsters in the town, Harry finds himself inside a cafe with Cybil. In the novelization, it is revealed that Cybil followed Harry into the alleyway and rescued him from being killed by a "monster", and then dragged him into the cafe. The Play Novel contradicts the novelization, claiming that when Cybil came to, she entered the cafe to get out of the ash-like snow and already found Harry sleeping inside.

Cybil cannot find any logical explanation as to what has happened to the town of Silent Hill, but feels that something is wrong. Harry is the only person she has seen in the town and all communication devices are not working. In the novelization, Harry also tells Cybil that he had a handgun and knows how to use it, but probably dropped it in the alleyway. Because of the alarming nature of their situation, Cybil gives Harry an extra gun she found and tells him to be careful with it before departing.

Sometime later, Cybil sees a glimpse of a girl through the fog on Bachman Road within the eldritch ghost town. Cybil follows the figure to an obliterated road, but the figure vanishes after apparently walking into "thin air".

Much later in the game, Cybil sees Harry and follows him into the Green Lion antique shop. Here she explains that the police were investigating the flow of drugs in Silent Hill, which she attributes to all the weird things going on. She seems resistant to Harry's talk of demons and the occult surrounding the town. Cybil and Harry lose contact after Harry separates with her by crawling through a passageway in the back of the shop.

When Harry enters a boat in the alternate Resort Area, he is relieved to run into Cybil again. This time, he insists that something is going on. Cybil is still reluctant to believe Harry, despite this time having seen the fog and ash-like snow turn into darkness and rain as constantly referenced by the manipulative mad preacher Dahlia Gillespie (who serenely hides the truth about herself as the current leader of the local doomsday cult known as The Order involved with the ritualized burning of Alessa herself). Left with no recourse, Harry and Cybil decide to split up and look for Cheryl; Harry leaves to investigate the lighthouse while Cybil heads to the Lakeside Amusement Park.

Cybil learns the truth about Silent Hill too late; she fails to rendezvous with Harry on the boat, having been attacked by a parasite in the sewers, and Harry's next encounter with her occurs on the Otherworld amusement park's Merry-Go-Round. Having been infected by the same type of parasite that control the Puppet Doctors and Puppet Nurses at Alchemilla Hospital, Puppet Cybil Bennett draws her gun and shoots at Harry.

If the Red Liquid (Aglaophotis) was obtained earlier, it is possible for the player to rid her of the parasite's influence and save her life. If not, Harry will have no option but to kill her in self-defense. Cybil falls to the ground and squirms in pain as she bleeds violently from her face. Harry then kneels down in sadness and frustration. This will lead to the Bad or Good ending.

If Harry spares her life in the amusement park (resulting in the Bad+ or Good+ ending), Cybil will fall to the ground and the parasite crawls out of her back and Harry squashes it under his foot. Cybil and Harry then have a conversation about Cheryl's origins. In Nowhere, she corners Dahlia and Alessa Gillespie along with Alessa's scarred older self sitting on a decayed wheelchair in the final area, but Dahlia's psychic energy shoves Cybil back and knocks her out.

If the player achieves the Bad+ ending, Cybil regains consciousness after the final boss fight. She walks over to Harry, smacks him out of his grief, and tells him to "go" as the Otherworld is crumbling around them.

If the player receives the Good+ ending, Alessa gives Harry a newborn baby and uses her power to open a portal for him. Cybil awakens and follows Harry through the light, which transports them out of the Otherworld in time. Cybil and Harry are seen running in Silent Hill, with the baby in Harry's arms, and they disappear into the fog. The game's opening sequence is also altered, replacing Harry's wife with Cybil.

If Cybil did survive the game, it is possible that she would report the hellish and dark truth of Silent Hill to the world, and in doing so save others from unwittingly falling victim to the malicious denizens of the town. It is also possible that she would have kept silent about it however, in order to avoid being labelled insane. It is unlikely Cybil would need to go into hiding because the Order went in a period of inactivity after the first game. In addition, detective Douglas Cartland exposed the Order nearly two decades after the events of the first game.

The novelization uses the Good+ ending, in which Cybil lives. However, the canonicity of the novelization is arguable as it was also written by Sadamu Yamashita, who was not involved in work on the games.

Cybil is neither seen nor mentioned in Silent Hill 3. This does not necessarily mean that she is dead, however the Good+ ending (in which she survives) seems to suggest that Harry and Cybil intended to raise Heather together, making her complete absence notable.

In Silent Hill: Homecoming, Deputy Wheeler tells Alex Shepherd and Elle Holloway that a female police officer disappeared when she went to Silent Hill. The only evidence left of her was her motorcycle, which was found crashed on the road to Silent Hill. It is heavily implied this was Cybil.

Most tellingly, in a section regarding Cybil and Harry's relationship following the Good+ ending in the Book of Lost Memories, writer Hiroyuki Owaku stated that what happened to Cybil was "left to players' imaginations". However, the Book of Lost Memories also stated that the Good ending (in which Cybil dies) is the "orthodox ending, which is connected to the third game".

When asked if Cybil was dead, developer Masahiro Ito bluntly responded "Yes, I remember Cybil is dead. "When asked the meaning of Owaku's statement, he replied, "if you choose 'good+' ending among them, she is not dead, maybe."

Director Keiichiro Toyama, who left Team Silent after Silent Hill and was not involved with latter entries, initially stated that he intended the Good ending to be the true ending, and he believes Owaku developed Silent Hill 3 around the first game's Good ending. However, Toyama changed his mind and also considers the Good+ ending to be "a true ending."

Cybil appears in the 2006 Silent Hill movie, and she was portrayed by Laurie Holden. As in the game, she is a skeptical police officer from a local county Brahms (instead spelled "Brahams") in Virginia. She rides a motorcycle just like her videogame counterpart and aids the protagonist Rose Da Silva in finding her missing adopted daughter Sharon. Cybil dies via being burned alive by the hands of a puritanical fanatic cult called The Brethren (affilite group of the main parent cult known as The Order) and their mad leader Christabella who foolishly believed she was a witch for helping Rose Da Silva find her daughter Sharon, whom the said cultists believed to be the likeness/vessel of the burnt child Alessa Gillespie they claimed to be a demon before the whole cult later all executed for their crimes by the scarred older Alessa and her sentient demonic alter ego Dark Alessa.

Cybil Bennett appears in Silent Hill: Shattered Memories as well where she has 3 potential appearances depending on the player's Psych Profile. But unlike the canon character of the same name, this Cybil is a police officer from Silent Hill, and she knows both the town and its citizenry well. Her father raised her as a dutiful police officer, and she takes her job seriously enough to be out on patrol during a major blizzard. Cybil has been a Silent Hill police officer since the age of twenty. Similar to the original game, she is met in a diner in Silent Hill; if the player goes through the Good Ol' Days bar instead of Diner 52, she is met at Harry Mason's house soon afterward.

Cybil has a cameo in the "Joke" ending of Silent Hill: Book of Memories. She arrests the man named Trevor for "resisting decency and intent to seduce". Her badge says she works for the Silent Hill Police rather than Brahms. It is unclear if this was simply a goof, although it is of no importance as the "Joke" ending is simply a mere playful ending. 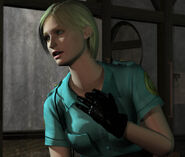 Cybil on the phone.

Cybil on the phone.

Cybil on her motorcycle.

Cybil smiling at Harry in the cafe.

A possessed and parasitized Cybil.

Cybil in the Silent Hill film. 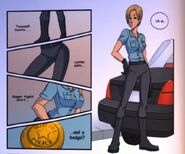 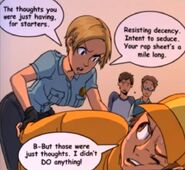 Cybil arrests Trevor for having "indecent thoughts" about her.

"This is Silent Hill. Things work differently around here."