Cyborg (also known by his real name Victor Stone) is the overall tetartagonist of the DC Extended Universe.

He makes a cameo appearance in Batman v Superman: Dawn of Justice, and is one of the five titular main protagonists of Justice League.

He is portrayed by Ray Fisher.

Prior to his tragic accident and cybernetic transformation, Victor Stone was an optimistic football enthusiast and academic overachiever, thus managing to gain a scholarship to Gotham City University. After the accident, however, Victor abandons football and becomes gloomy, secluded, depressed, and even somewhat robotic. Cyborg can also be quite blunt and robotically stiff, sternly pointing out to a person that the latter should have moved out of the path of the Humvee flying right at him. This all stems from the fact that after becoming a cyborg, Victor no longer feels fully human, thinks of himself as a monster, and even Wonder Woman herself was initially unable to persuade him otherwise. However, when his father Silas Stone gets kidnapped by Steppenwolf, Cyborg joins the League without hesitation, and even personally attacks the fearsome New God in order to save him.

Cyborg accepts his condition and upgrades his cybernetics. After fighting alongside the Justice League for some time, however, Cyborg seems to have warmed a bit to all of his teammates, as he bonds a bit with Flash over their unexpected metahuman power gain (though he still found the latter's humor a bit annoying[4]), he somewhat bonds with Batman over their engineering expertise, he notably reassures the previously skeptical Aquaman that "the ride ain't over yet" (before helping the Atlantean fight a group of Parademons), he comes to appreciate Wonder Woman's emotional support, and even shares a laugh of relief with resurrected Superman (after they successfully pry apart the 3 Mother Boxes). Indeed, Cyborg is the first member of the League to have befriended every single one of his teammates during their first major battle. Superman's return and the defeat of Steppenwolf finally grants Cyborg the confidence to reveal his cybernetic self to the world and begin mending his strained relationship with his father, as he is seen beginning to work with Silas at S.T.A.R. Labs.

Lex Luthor had video footage of Victor Stone getting his body reconstructed by his father Silas with a Mother Box. 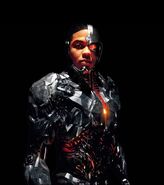 Cyborg with the Justice League.
Add a photo to this gallery

Retrieved from "https://hero.fandom.com/wiki/Cyborg_(DC_Extended_Universe)?oldid=1722643"
Community content is available under CC-BY-SA unless otherwise noted.