Cyborg Sonic is Sonic's robotic clone who was created to assist Team Sonic in defeating Hypnobot. After that, he, along with the rest of Team Cybonic, protect Roboken from Eggman and other threats.

Robots from the Sky Part 4

He and the rest of Team Cybonic were created with Team Sonic's DNA so they would be immune to Hypnobot's signals. The plan works as they were not influenced by him. Then they proceed to help Team Sonic defeat Hypnobot and succeeded after Tails broke off his antennae. They remain in Morristown, now called Roboken, to help defend the city from any evil.

He finds Eggman in Roboken and attacks, but Eggman tells them he wants to make a peace offering. He tells him and his friends that he wants them to help him to beat Team Sonic in a soccer match. They refuse, and take their gifts which turned out to be mind-control devices. When Eggman uses them to fight Team Sonic in a match, their skills were equal to theirs, so Eggman programs them to act like jocks. Luckily, Team Sonic found their weakness and won the match, as well as free them from control and they all kicked around Eggman in his Eggmobile.

He makes his final appearance in the series in this episode. 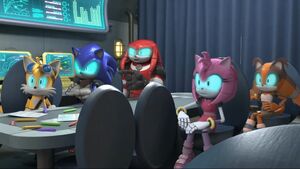 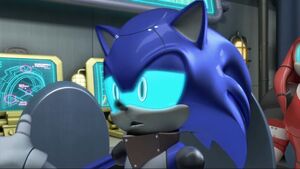