Cyclone (real name Maxine Hunkel) is a fictional character and superheroine in the DC comics and universe.

Maxine is the grand-daughter of Abigail "Ma" Hunkel, the original Red Tornado. Wind manipulation powers allow her to create dangerous storms and air constructs. These powers stem from a nanobyte infection given to her by super-villain T.O. Morrow. Her appearance is based on Mark Waid and Alex Ross' Red Tornado of the Kingdom Come universe. She has been a member of the Justice Society of America.

She was created by Geoff Johns and Dale Eaglesham, first appearing in Justice Society of America (Volume 3) #1.

Maxine is the daughter of Huey Hunkel, and is the granddaughter of Abigail "Ma" Hunkel, who was the original Red Tornado and honorary member of the Justice Society. Maxine grew up idolizing her grandmother, and became a fan of The Wizard of Oz, even having a pet monkey named Frankie, named after the author of the book, L. Frank Baum.

When she was young, she was kidnapped by T.O. Marrow, a scientist who created a android that was the second Red Tornado. Marrow injected Maxine with Red Tornado technology called nanobytes, but the effects didn't manifest until years later.

Maxine continued to grow up, becoming a highly intelligent individual, and became a student at Harvard University and majored in theater. During her time there, she showed herself to be an avid fan of musical theater, but her talkative nature and know-it-all personality alienated her from her peers. As a result of this, she became somewhat of an outcast, and she began to suffer from depression.

Her powers began to manifest during this time, as she demolished her grandmother's garage when she sneezed. The next day, Maxine awoke inside a tornado, and realized that she had the power to manipulate wind. Maxine decided to join the Justice Society, as the group wanted to expand its rank and train new heroes, and she became one of the first recruits on the lists.

She was introduced to the members of the Justice Society, and showed her fan girl side when meeting the heroes, notably Stargirl. As a way to ease the pain of seeing Mr. America's death, Stargirl took Maxine to her room and showed her colorful fabric, asking her to select her new outfit.

During her time with the Justice Society, Maxine help the group defeat the Fourth Reich and fought the Heartbreak Slayer when he attacked their headquarters. Later on, she assisted the Justice during the Lighting Saga, and teamed up with the Red Tornado android when she visited the Fortress of Solitude. 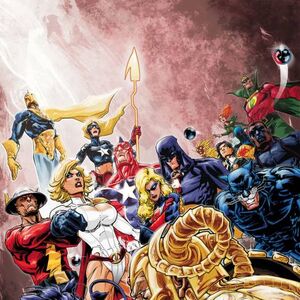 Cyclone with the Justice Society.