Spending her time researching and exploring various sites associated with Legendary Pokémon of the Sinnoh region.

Cynthia is the Champion of the Sinnoh region's Elite Four in Pokémon Diamond, Pearl, and Platinum. In the anime series, she also helps Ash Ketchum, Brock and Dawn protect the three Lake Guardians, Azelf, Mesprit, and Uxie from Team Galactic, led by Cyrus, and later Meloetta from Giovanni and Team Rocket. Out of all Pokémon champions, she has made the most appearances in both the game and anime series.

She is voiced by Aya Endō and Mie Sonozaki in the Japanese version, and by Tara Jayne and Allegra Clark in the English version.

Cynthia is a young, beautiful woman with long blonde hair where one bang covers her left eye entirely, and has pale skin and black eyes.

Initially, she wears a black jacket, scarf, pants, and high heels. While in Unova, she wears a blue sleeveless shirt, the same pants as her initial outfit, and black high-heeled sandals.

Cynthia has a strong yet kind-hearted personality. She seems ambitious in battle, but ultimately accepts defeat if she loses, often claiming that she enjoys the fun of Pokémon battles rather than winning. She is also very interested in mythology, folklore, and history about Pokémon, especially those in the Sinnoh and Unova regions.

In the anime series, it is also shown that she likes ice cream.

Cynthia first appeared in the episode Top-Down Training!, where she was challenged by Ash's Sinnoh rival Paul, and easily defeated him using only her Garchomp.

She appeared again in Losing Its Lustrous and Double Team Turnover!, where she is seen battling Team Galactic to prevent them from stealing the Lustrous Orb.

Later on, she joins Ash and his friends in battling Team Galactic in an attempt to save Dialga and Palkia from their control. She manages to defeat and apprehend one of Cyrus's commanders, Jupiter. She later helps Ash defeat two more commanders, Mars and Saturn, but fails to confront Cyrus, as he is lost in the new universe that the two Legendary Pokémon created (as they turned against him). As a result, Team Galactic disbanded.

She was also present at the Sinnoh Pokemon League, alongside President Charles Goodshow, although she did not participate in it.

She also made cameo appearances in Memories are Made of Bliss! and Arceus and the Jewel of Life.

Cynthia made her long-time return in the series in the episode All for the Love of Meloetta!, where she meets up with Ash again, along with his new friends Iris and Cilan. In this episode, she begins wearing her second outfit, as it becomes more suitable with the warmer climate of Unova. During the episode, her car accidentally collides with Meloetta, and Cynthia and her friends take care of the injured Legendary Pokémon, whom later recovers. Iris later asks to battle her using her Axew, but the battle ends prematurely after Axew nearly faints. As Ash and his friends leave for eastern Unova to meet up with Cynthia at her villa, she tells Ash that someone he knows is waiting for him there.

In Piplup, Pansage and a Meeting of the Times!, the mystery individual that Cynthia told Ash about is revealed to be his old friend Dawn from his journey in the Sinnoh region as the group arrives at Cynthia's villa.

In Jostling for the Junior Cup!, she is seen talking to Alder, the Unova Pokèmon Champion, whom tries to flirt with her, but she respectfully declines his offers in joining him on a date. She later helps Iris train her Dragonite in an attempt to help it obey her in future battles. She then acted as the referee in Ash and Dawn's battle between their Pikachu and Quilava. The battle was stopped before a clear winner became apparent as Cynthia only intended for the two old friends to have a friendly, non-competitive battle. She later watched as Dawn left for the Johto region.

Her biggest role in the Unova series arrives during the episode Meloetta and the Undersea Temple!, where she learns that Ash, Pikachu, and Meloetta were captured by Giovanni, the leader of Team Rocket. She travels with Iris, Cilan, and Ridley to the Abyssal Ruins, where she uses her Garchomp to battle the Forces of Nature and interrupt Team Rocket's evil scheme. After Team Rocket was overpowered and fled, she stated that there are those like Ash, his friends, and herself that do not desire to conquer, and hope that one day, everyone in the Pokémon universe will hear Meloetta's peaceful song.

Her final appearance in the main anime was in the episode Beauties Battling for Pride and Prestige!, where she revealed to Ash that the Unova League would take place in Vertress City, before she parted ways with him, wishing him luck in the competition. She also made a cameo appearance in the end credits of the movie Genesect and the Legend Awakened. 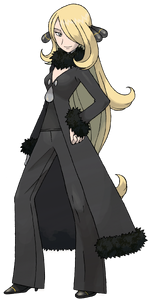 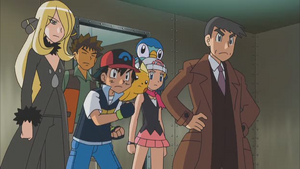 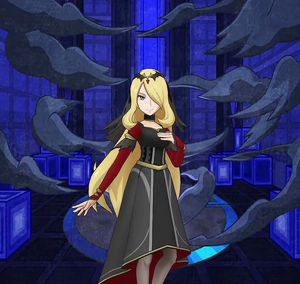