Get back to Her world (Project X Zone)

Sorceresses
Cyrille is a playable character from Shining Force EXA. She is one of the game's two protagonists and it one of the Heritors in charge of the Geo-Fortress.

She was voiced by Hōko Kuwashima in the Japanese version, and by Erin M. Cahill in the English version.

Cyrille is intelligent, calm, cool, and collected. Initially, she comes off as somewhat of an ice queen, bookish, and somewhat of a loner. She can be socially awkard at times and shy. In time however, she shows kindness, fear, and even remorses for Toma the fate of destined for the Heritors. She is a bit secretive, hiding much from others if but to prevent them from knowing the cruel fate that awaits the Heritor. Unlike Toma who acts in reckless abandon, Cyrille tries to approach things thoughtfully and methodically.

Despite being aloof, she harbors great attachments for Toma, often becoming unhinged and envious when the Les Vaes tries to seduce him.

Cyrille is mostly a long-range fighter. She fights by swinging a book, or by shooting enemies with a crossbow. She has high INT, so she can deal a great deal of damage using magic; however, has lower HP and defense than Toma, making her vulnerable to physical confrontations by enemies.

When using Cyrille, it is recommend to carve Power Arts that reflect her abilities as a mage (e.g. MP Concentration, INT, Elemental Magic levels, etc.), all the while reinforcing her defenses-- particularly to Knockbacks, Stuns, and Critical Hits. It is important to increase her HP and defenses as quickly as possible to survive any melee strikes.

Though she does use bows, they typically do not deal very much damage-- particularly to enemies around her level or above it. Therefore, it is better to focus on increasing her aptitude as a mage while reinforcing her defenses than to focus on her Weapon Attack or Swinging.

Cyrille makes an appearance in Project X Zone. She is a playable character who is partnered up with Toma.

Cyrille is one of the masters of the holy sword Shining Force. Influenced by her historian grandfather, she loves to read books. She rarely shows any emotions and isn't very good at getting along with others, often making her appear cold. In reality, she is a kind and caring girl. Having awoken to the harsh responsibility placed upon her by the holy sword, she was rough on Toma due to his carefree attitude even though he too is a master. However, once she learned that he too has something he wishes to achieve at all costs, she apologized to him. This led to her starting to show more emotions, and at the same time she starts to have feelings for Toma. 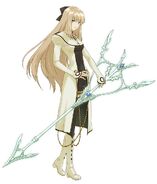 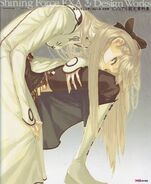 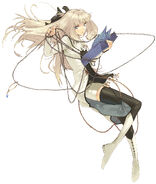 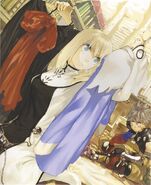 Retrieved from "https://hero.fandom.com/wiki/Cyrille?oldid=2205389"
Community content is available under CC-BY-SA unless otherwise noted.