City of Heroes: Smoke and Mirrors

The Circle of Thorns

Cyrus Thompson formerly known as Breakneck was a hero in M.M.O. City of Heroes as well as it's tie-in-comic. He is part of the game's time travel nexus, Oroboros, as a Task Force heroes can travel back in time to be part of for an event that occured in the mid 2000s.

In order to stop the cult of evil wizards known as The Circle of Thorns, The Freedom Phalanx need to hunt down three people in Paragon City the Circle of Thorns are planning to sacrifice for a massive demon summoning. The people set to be sacrificed appear to be utterly random with next to no importance save for an unseen resonance between their souls specifically and as such The Circle of Thorns need them and only them for their plans. After getting advice on the matter from their resident arcane expert, Numina, the rest of the Freedom Phalanx head out to protect the three people both for the sake of the sacrifices themselves and the Paragon City as a whole.

While Synapse and Positron go to find a fashion model named Candy Lebeaux and Manticore and Citadel went to secure a poverty stricken child named Jimmy Preston, Statesman and Sister Psyche' went to protect one Cyrus Thompson, the third designated victim. They encounter a retired old man sitting at the monorail. Cyrus is a world worn veteran super-hero who retired in the 70s and despite his jaded outlook is still honored to see Statesman again. When Statesman says he does not recognize Cyrus, Cyrus states that back in the 30s he was called Breakneck and he wore a mask back then and reminds him that the two of them fought the long disbanded Diamond Mask Gang together. While Statesman says he remembers fighting the Diamond Mask Gang, he can not recall Breakneck, he apologizes for this and clarifies he was over 100 years old and has fought side-by-side with literally thousands of other super-heroes. Cyrus take his lack of impact of Statesman in stride and goes into a small rant about lament over retiring as a super-hero and how if he didn't have a heart condition that his powers would almost certainly kill him if he still used them, he would have readopted his Breakneck identity. Sister Psyche's can telepathically sense that Cyrus is in the lighter stages of senility and doubts whether or not he is remembering any of his past correctly.

In the midst of the meeting the Circle of Thorn ambush Statesman and Sister Psyche'. An intense battle leave both Statesman and Sister Psyche' in need of medical attention and allows the Circle of Thorns to get away with Cyrus Thompson through shear numbers and distractions during the fight. The Circle strike simultaneous at the Icon fashion house and the Kingsrow slums to acquire both Candy and Jimmy as well. The three are trust-up to pillars at a ceremonial temple underground by the Circle as they begin their rites. Thanks to some quick medical attention the members of the Freedom Phalanx are able to make a recovery and through a combination of telepathy, radar and super speed are able to find the area most affected by supernatural activity as a sign of where the Circle of Thorns were holding the three. Meanwhile in the temple it-self, Baron Zoria, the recluse revivalist of the Circle of Thorns was himself overseeing the finer points of the ceremony. Cyrus Thompson comes to and he Candy and Jimmy trade concerns of dread about what is about to happen to them, though Cyrus is also heavily concerned with what his death will be used to do to the city after they are dead.

Cyrus's concerns seem diminished once he sees the Freedom Phalanx arrive before the final stages of the day long rites. Cyrus, Candy and Jimmy's hopes are dashed though once Zoria counteracts the invasion with an extremely powerful sleep spell. Each of the Freedom Phalanx must deal with incredibly vivid dreams playing off their worst fears while kept in a supernatural slumber' Sister Psyche' is being subsumed by the small echo of Aurora Borealis still in the back of her mind from the time the two shared a body; Positron's powers become so unstable he is going nuclear and his armor can not stop them from wiping out the city when he does; Manticore is surrounded by poverty and pestilence and his high-quality gadgets arrows are useless to the sick and dying' Synapse is reliving the the body splicing horror of the Crey experiments that gave him his powers except this time his restraints can't be broken; Statesman is literally drowning in a world where people need his help and he can't save them all no matter how hard he tries; Citadel is initiating a dream program where his is just sitting back and enjoying a good book since his dreams are entirely self constructed however he is none-the-less unable to reactivate and thus trapped in his dreams even if they are not unpleasant. With the professional heroes out-cold Cyrus makes up his mind to save the day himself. Cyrus activates his super-speed powers to break his restraints and fight off the Circle of Thorns moments before Candy and Jimmy are about to be killed when he can no longer wait for the Freedom Phalanx to pull through. In the dreamworld Sister Psyche' is the first to break out due to her psychic powers being fully available to her in the dreamworld and then breaks into the dreams of her fellow team-mates to break them out. By the time Sister Psyche's is able to rescue all of her fellow heroes and free them from the spell Cyrus has already defeated Zoria leaving the remaining magi and demons easily overcome for the awakened Freedom Phalanx, however Cyrus is lying on the ground dying, his heart giving out due to the stress of his powers at his age. Cyrus dies just seconds after being found and the Freedom Phalanx take his body as well as Candy Lebeaux and Jimmy Preston back to town.

The Freedom Phalanx are able to commission a statue to Cyrus and unveil it before the city in monorail to him, just outside the monorail where they encountered him. Cyrus Thompson continues to be remembered by the citizens of Paragon to the present day due to his courage, sacrifice and the example he set.

Cyrus Thompson is borderline senile, overly nostalgic and very much jaded to the modern era. Cyrus states he was one of the first African American super-heroes of the modern era though he admits he did not crusade for equal-right like some of the other African American super-heroes of the early re-emergence of super-powers. Cyrus actually states his mask was at first worn so he could fight crime without becoming a target for white-supremacists. Cyrus seems to have hung up his mask shortly after World War II as he felt the world changed after the war and he was out of his comfort zone going back to crime fighting after the war, though it was also because he was no longer needed and the war created a spike in those willing to take to the streets to fight crime. The monument to Cyrus still stands outside the Red-Line monorail. Ironically Cyrus is far less remembered as the super-hero, Breakneck, now and more remembered as a brave civilian who refused to let evil win and innocent civilians be sacrificed. He is still a point of strong sentiment for the Freedom Phalanx even with their wide array of other adventures and they consider him an inspiration to what really matters. 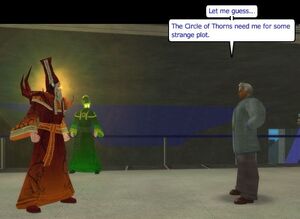 Cyrus being confronted by the Circle of Thorns 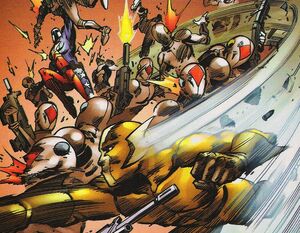 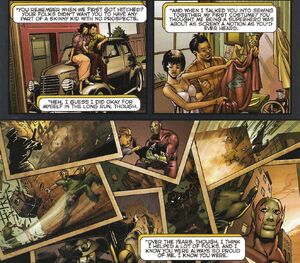 Cyrus recalls his transition to super-hero 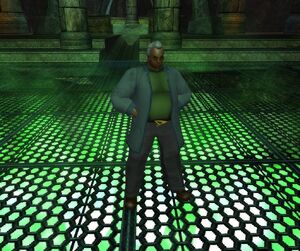 Cyrus breaks free of his binding to fight Zoria 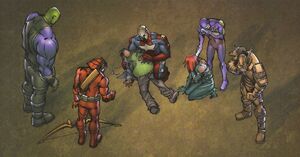 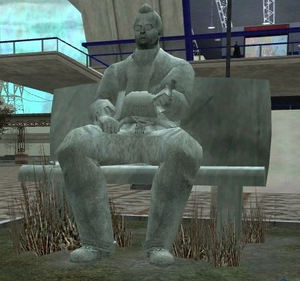 Statue to Cyrus Thompson
Add a photo to this gallery
Retrieved from "https://hero.fandom.com/wiki/Cyrus_Thompson?oldid=1828747"
Community content is available under CC-BY-SA unless otherwise noted.