Start a Wiki
Cysero is a mad weaponsmith. Supposed creator of all left socks and cakes in the AE games... a great many puns as well. He has recently taken over the members Clubhouse and changed it into a Cysero paradise. He is somewhat dimwitted, as shown during the "Golden Onslaught" plot, where he never realized he was kidnapped and all it took to keep him from escaping was a circle with an arrow pointing to it saying "Do Not Cross" (he was trapped by his sense of humor). He was eventually freed by the hero. 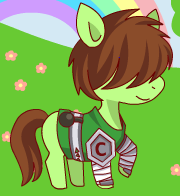 Pony vs Pony (Cycerpony)
Add a photo to this gallery

Retrieved from "https://hero.fandom.com/wiki/Cysero?oldid=1653545"
Community content is available under CC-BY-SA unless otherwise noted.