Benjamin Oliver Walker, otherwise known as D-9341, is the main protagonist of SCP: Containment Breach, a video game adaptation of the SCP Foundation.

He is a disposable class personnel housed at the SCP Foundation, an extremely secretive organization that contains and analyzes dangerous, supernatural entities labeled SCPs, using death row inmates to test these creatures.

Absolutely nothing is known about D-9341's past other than the fact that his name is Benjamin Oliver Walker, a senior researcher at the Foundation before his memories were wiped and he was demoted to D-class for doing unauthorized research on an anomalous phenomenon known as 'The Spiral Gestalt". After being escorted to Euclid classified SCP-173's containment chamber to do some tests on it with another pair of D classes, a power outage ultimately led to a huge containment breach among the facility. Fitted with nothing but an orange prisoner jumpsuit, D-9341 is forced to navigate his way through the Foundation with dozens of inhumanly dangerous anomalies hunting him down.

After this, the D's story is left up to the player, but he is usually characterized to "befriend" SCP-079 to help him escape. There are two endings to the game. The first ending, considered the bad one, is on Gate B, where SCP-682 (one of the most dangerous SCPs) escapes and the facility is forced to nuke the entire base, killing all including the player. However, if the player turned off the warheads earlier in the game, MTF units and helicopters will swoop down and Execute the defenseless D. The second, "good" ending, on Gate A, is when SCP-106 makes a run for it out of the facility, where it is quickly gunned down by the Foundation's HID turret and sent back to its dimension. SCP-106's escape gives the player time to slip past the hostile MTF unnoticed and flee the facility, only to get captured by the Foundation's rival organization, the Chaos Insurgency. If SCP-106 is already contained by the player, Going through Gate A will cause D-9341 to be captured by the SCP Foundation for study as a potential SCP.

Before the 1.3.0v Update of SCP Containment Breach, D-9341's name and history had never been revealed, leaving him an enigma amongst the player. He was originally even thought to be a female, as he only spoke through text boxes in his head, but this was disproved when he spoke aloud in a clear masculine, noticeably young, voice.

The update revealed that D-9341's real name is Benjamin Oliver Walker and once worked at the facility as a Senior Researcher, before being given a disciplinary hearing due to performing unauthorized research on a phenomenon called the "Spiral Gestalt". It is assumed that this hearing ruled him unfit for further activities within the Foundation, thus demoting him to Class-D.

From the 2 Gate A endings, it is implied that D-9341 has supernatural abilities, activated when the MTF units enter the service tunnel, causing it to cave them in. (Although this is believed to have been done by the Chaos Insurgency.) Then the MTF capture him, he is considered to Obtain SCP classification. although this is for his high amount of luck, and surviving certain death on multiple occasions. 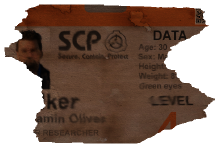