Looney Tunes: Back in Action

Secure the Warner Bros. lot and stop the Chairman's evil plan (all succeeded).

Mr. Chairman and his agents

D.J. Drake is one of the two main protagonists (alongside Daffy Duck) of Looney Tunes: Back in Action. The initials are believed to stand for "Damian Jr." after his father, Damian Drake, who is an actor playing a spy. Brendan Fraser portrayed him, He also played Stu Miley in the 2001 film Monkeybone, Grayson in The Nut Job as well as playing himself, and the voice for Taz in this film. This is why he didn't reprise the role for George in George of the Jungle 2. He and Kate are live action characters that have only appeared in Looney Tunes: Back in Action, as they never appeared again afterwards. In the Japanese dub, he was voiced by Toshiyuki Morikawa.

In the beginning of the film, DJ is a security guard for Warner Brothers. He tries out for a stuntman job but makes an unfavorable impression on the hiring committee. After the tryout, a conversation with another security guard reveals that DJ's father could get him a stuntman job any time. However, DJ prefers not to ask his dad because he wants to earn the job. He begins the day by waxing a cherry red car owned by one of the Warner brothers. As he is in the middle of waxing, Kate Houghton, Vice President of comedy, approaches DJ with her hand firmly grasping Daffy Duck's arm. Kate had just fired Daffy Duck and asks DJ to escort Daffy off the premises. During the conversation, Kate is noticeably attracted to DJ which allows Daffy Duck to escape her grip. DJ gets to work by chasing Daffy Duck throughout the Warner Brothers studio lot. The chase results in a lot of damage which ends with the Batmobile bringing down the Warner Brothers tower in a watery crash. DJ is publicly humiliated. He is fired, stripped of his uniform, and told that his father would be ashamed of him.

Back at home, DJ is surprised that Daffy Duck hid in his backpack. DJ asks Daffy to leave his home but Daffy does not listen. Daffy looks around and discovers that DJ is the son of legendary spy actor Damian Drake. When DJ's television remote control suddenly rings he discovers a video call from his father. The video call reveals that DJ's father is an actual spy. He is in trouble and asks DJ to go to Las Vegas to meet Dusty Tails about a special diamond called the Blue Monkey. DJ takes off for Las Vegas in his car while Daffy tags along. DJ throws Daffy out of the car several times, but Daffy keeps coming back. Eventually, DJ accepts that Daffy will accompany him to his Las Vegas trip. During the car trip, Daffy learns that DJ is only a security guard as a job and is a stuntman career-wise. His last stuntman work was the "Mummy" movies but lost it because Brendan Fraser one day suddenly felt continuing to have a stuntman threatened his manhood. Meanwhile, at Warner Brothers studios Kate is in trouble because Bugs Bunny is no longer funny without Daffy. She will be fired if she does not get Daffy back by Monday. Bugs finds out from Daffy about the trip to Las Vegas and helps Kate to get Daffy back. Bugs and Kate set off for Las Vegas too.

After arriving in Las Vegas, DJ and Daffy meet up with Dusty Tails at a casino. They learn that DJ's father was tasked to retrieve the Blue Monkey diamond before Mr. Chairman from ACME got to it. DJ's father never showed up to pick up a playing card from Dusty Tails. Yosemite Sam and his henchmen burst in during the talk with Dusty. Yosemite Sam was ordered by Chairman to stop DJ and get the playing card. DJ grabs the playing card from Dusty and fights Yosemite Sam's henchmen. After causing a commotion in the casino, the chase spills out into the streets. While running away from Yosemite Sam and his gang, DJ and Daffy bump into Kate and Bugs. After a suspenseful and frantic car chase through the Las Vegas streets, all four manage to get away from Yosemite Sam and his baddies. The gang spends the night in the desert. The next day, Wily Coyote is ordered by Chairman to stop the gang but fails. DJ and his crew accidentally stumble into the secret laboratory Area 52 hidden in the desert. In the laboratory, DJ learns that the Blue Monkey diamond has the power to change people into monkeys and Chairman is planning to use it to change everyone in the world into monkeys. DJ gets a souped-up spy phone and rocket pants to help him retrieve the Blue Monkey diamond. Also, he gets a cryptic clue about the playing card. Meanwhile, Marvin the Martian who is captured in Area 52 is ordered by Chairman to stop DJ. Marvin releases other aliens from captivity in the lab to help him. DJ and his gang escape the lab. After connecting the clue to the Mona Lisa, everyone travels to the Louvre in Paris cartoon-style.

In Paris, DJ discovers that the playing card is concealing an mini x-ray screen. He uses the x-ray screen on the Mona Lisa and sees a map of Africa underneath the painting. After taking a picture of the map, the gang is surprised by Elmer Fudd who shows up to stop them. Bugs and Daffy keep Elmer busy in the museum giving DJ and Kate time to run away. Elmer Fudd chases Bugs and Daffy through all the different paintings housed in Louvre. Elmer is eventually defeated after he jumps out of a pointillist painting and is blown away by Bugs Bunny. While Bugs and Daffy was dealing with Elmer, Kate gets kidnapped by Mr. Smith. DJ chases Mr. Smith through the streets of Paris. When DJ sees Mr. Smith heading towards the top of the Eiffel Tower he tries to use the rocket pants. However, this does not work as he expected. The rocket pants fly off leaving DJ standing in his vertical stripes boxer shorts on the street. The three bears come by and have a laugh at DJ in his boxer shorts. DJ commandeers the shorts off Papa Bear and run up to the top of the Eiffel Tower. At the top of the Eiffel Tower, Beaky Buzzard is flying a helicopter to pick up Mr. Smith. When DJ reaches the top he sees Kate hanging off a helicopter ladder yelling that Mr. Smith has the camera. Kate falls off the ladder. As Kate is free falling in the air, DJ jumps to save her and uses the grappling hook in his spy phone to swing them safely to Bugs and Daffy. DJ admits that he lost the picture of the map to the kidnapper, but Bugs has the mini x-ray screen so they can get another picture of the map. When the chairman looks at the picture of the map he finds out it is useless because Daffy blocked the map in the photo. The Chairman decides to use Tasmanian Devil as his next agent to stop DJ and his gang.

In Africa, as DJ and the crew are following the map Granny, Sylvester, and Tweety riding on an elephant bump into them. Granny and her crew offer DJ and his gang a ride on the elephant. Once they reach the marked location on the map, DJ protects everyone from ancient traps while Kate solves a mysterious puzzle. When the traps are neutralized and the puzzle is solved the Blue Monkey diamond surfaces from the ground. After using the Blue Monkey diamond, DJ is transformed into a monkey. Daffy Duck changes DJ back into a human. Before they leave with the Blue Monkey diamond, Granny and her crew reveal their disguises. Granny, Sylvester, and Tweety are really Chairman, Mr. Smith, and Taz in disguise respectively. Mr. Smith uses a gun to disintegrate Chairman, DJ and his crew from the African jungle and integrate them back at ACME headquarters.

At ACME headquarters, Chairman orders his henchmen to restrain DJ. Chairman reveals that DJ's father is tied up and will be killed in a trap shortly. Chairman gives the Blue Monkey diamond to Marvin the Martian to hook it up to a satellite in space. Daffy and Bugs chase after Marvin's spaceship. Chairman has DJ and Kate tied up to die with DJ's father while he goes into a chamber that will protect him from the Blue Monkey diamond's magic. DJ and Kate manage to free themselves, neutralize a gigantic robotic security dog, and save DJ's father from Chairman's death trap. In space, Daffy becomes Duck Dodgers, neutralizes Marvin the Martian & the space satellite, and saves Bugs Bunny. After the space fight with Marvin the Martian, Bugs and Daffy head back to Earth. On Earth, Chairman transforms into a monkey after being hit with one of the beams that escaped the space satellite before it was blown up.

As everyone is walking out of ACME headquarters, the whole adventure about the Blue Monkey diamond is revealed to be a movie starring Bugs and Daffy. As DJ is walking on the set. he sees and punches Brendan Fraser out of frustration from losing the stuntman job from the "Mummy" movies. 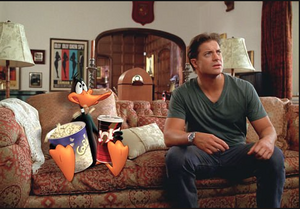 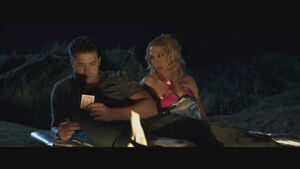 In Paris, DJ's rocket pants doesn't work as expected when he tries to rescue Kate

DJ notices his pants are gone but nobody seems to notice 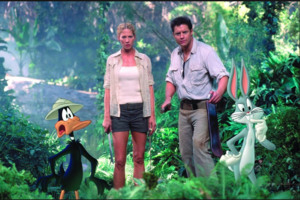 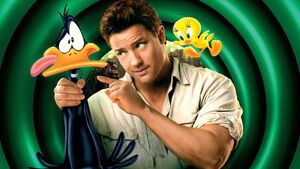 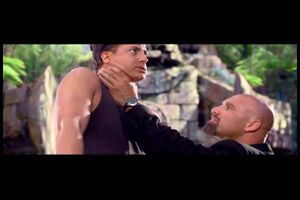 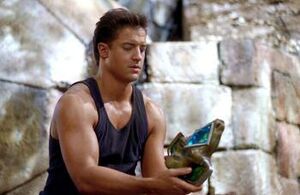