D.Va (real name: Hana Song) is one of the main protagonists and playable characters in the videogame Overwatch. She is a former professional gamer from South Korea who now uses her skills to pilot a state-of-the-art mech in defence of her homeland. She is also the titular main protagonist of the animated short "Shooting Star".

Hana Song (D.Va's real name) is a former professional gamer who now uses her skills to pilot a state-of-the-art mech in defense of her homeland.

Twenty years ago, South Korea was attacked by a colossal omnic monstrosity that rose from the depths of the East China Sea. The massive, lumbering construct caused catastrophic damage to coastal cities before it was driven back beneath the waves. In response, the South Korean government developed a mechanized armored drone unit, called MEKA, to protect urban environments in future engagements with the omnic threat.

The government's fears proved to be well founded, as a disturbing pattern of attacks emerged. Every few years, the monstrosity would rise from the sea to assault South Korea and its neighbors. The omnic learned from these encounters, often reconfiguring itself in a different form and appearing with new weapons and capabilities. Each incident ended in a stalemate, with the monstrosity defeated but not destroyed.

As the omnic continued to adapt, it eventually disrupted MEKA's drone-control networks, forcing the military to place pilots in the mechs. Scrambling to find suitable candidates, the government turned to the country's professional gamers, who possessed the necessary reflexes and instincts to operate the mechs' advanced weapons systems. Top stars were drafted, including reigning world champion Hana Song, also known as "D.Va." Famous for her elite skills, D.Va was a fierce competitor who played to win at all costs, and she had a well-earned reputation for showing no mercy to her opponents.

Seeing her new mission as a game, D.Va fearlessly charges into battle alongside the rest of her MEKA unit, ready to spring to her nation's defense at a moment's notice. Recently, she has begun to stream combat operations to her adoring fans, and her growing following has turned her into a global icon.

D.Va is a very competent combatant despite her young age, not taking failure as an option and showing no mercy to her adversaries. She possesses an egotistical side, often smack talking opponents during battle. Regardless of her fierce characteristics, D.Va takes pleasure in making her fanbase happy, as shown by cheerfully taking autograph requests from Reinhardt and Lúcio and being quick to thank her audience whenever she defeats an enemy.

Being a pro gamer, D.Va loves video games and enjoys making references to them. While on the battlefield, she will use many gaming terms, such as "nerf," "pocket healer," "GG," "AFK," and more. Despite the fact that she is mostly into games produced by Blizzard (for obvious reasons), she is familiar with old arcade ones as well. An example is her calling Winston "a giant gorilla from those old video games," which is a reference to the Donkey Kong  arcade game. 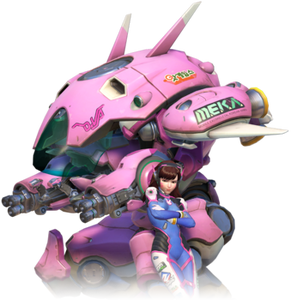 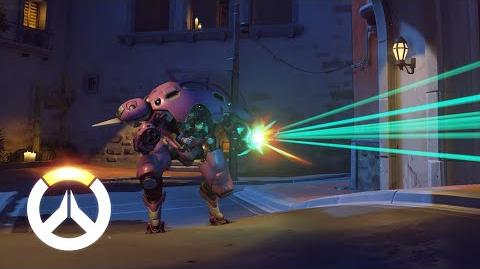