He was the pet canid of the private military company Diamond Dogs during the 1980s. Like his owner, Venom Snake, the dog wore an eyepatch over his missing right eye.

He is a supporting character during the various missions and be order him to attack the enemies.

D-Dog is a wolfdog puppy that Venom Snake finds in the wilderness after its mother has been killed. Snake takes him back to base and raises him with help from Ocelot, whereupon he becomes a valuable field asset and companion to the legendary soldier.

D-Dog's main function as a buddy is to automatically mark enemies, prisoners and items as you approach from a distance, making search-and-rescue missions a snap and undoing the problem of blind corners in outposts. He can also be equipped with some small weapons that let him take out enemies or Fulton them on his own. 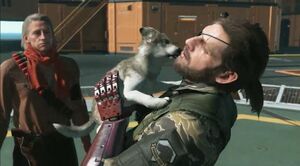 DD as a pup
Add a photo to this gallery

Retrieved from "https://hero.fandom.com/wiki/DD?oldid=2022453"
Community content is available under CC-BY-SA unless otherwise noted.