No information
DJ Suki is a supporting character from the movie Trolls.

She is voiced Fryda Wolff in the series. for an impromptu musical moment — of which there are many in Troll Village. Her DJ equipment is all natural, consisting of crickets, beetles and other little bugs that she scratches and mixes with to create a totally awesome sound. She can get kind of loud and crazy sometimes, but when it comes to her friends she's really sweet and understanding. Her style is very unique and it's hard to tell whether she's a girly Troll or a tomboy.

DJ Suki is a red-pink troll wearing a stripey top, stripey trousers, large, white headphones with purple flowers and white, yellow, and purple bangle bracelets on each arm. She has her orange dreadlock-like hair tied up with a sparkly purple hair tie. She has a purple diamond in or as her belly button and smidge touched it once. Weird, huh? She has a light blue-green nose, rose colored eyes and lots of glitter on her cheeks that resemble many freckles. She also has sparkly purple-pink eye shadow and long eyelashes. No Hug Time bracelet is visible on her wrist like the other Trolls wear, but she probably has some sort of watch built into one of her bangles. 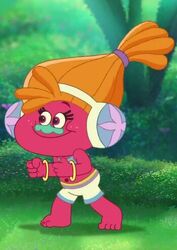 DJ Suki in the series.