Help Crim with his homophobia

D is a hero from the 2010 American independent drama film Triple Standard. He combats homophobia by convincing his secret lover Crim to reform his hateful ways. D is a young Caucasian male in his early 20's and plays basketball often. He has black hair, average height, and an athletic build. He has a serious and solemn personality. His general attire is a gray patterned shirt, gray boxer shorts, and blue jeans.

He was portrayed by Lee Amir-Cohen.

The film begins with a group of guys finishing a game of basketball. In the locker room, there is some roughhousing between Crim and Stanley that causes Crim to go into a homophobic outburst. During the communal shower, most of the other guys try to calm down Crim but their efforts lead to nothing. After the shower, Crim ends up going home in a visibly upset mood. All this time, D who has been living with Crim for several years remains silent.

When D goes home he sees Crim sitting on the couch still disturbed by what happened in the locker room. D remains quiet and goes through some mail on a table which also has framed photographs of Crim with his wife and kids. D asks Crim if he picked up the pizza. Crim shakes his head. D ends up making dinner for both of them which is a salad of sliced peppers and microwaved chicken. During dinner there is tense silence between the two men.

After dinner, D is in his room in bed and Crim walks in. Crim takes off his underwear goes into bed with D. At this point in the movie, D stands up to Crim. D says he is tired of Crim's triple standard - being D's secret lover for the past three years and at the same time says a lot of hateful rhetoric about gays. D asks Crim to leave and sleep in his own room. Crim begrudgingly leaves D's room.

In the middle of the night, Crim sneaks back into D's room and is apologetic. D understands Crim's situation - being a businessman with a wife and kids depending on endorsements coming from Crim's past successful basketball career. D is not saying for Crim to come out but to just stop the hateful homophobic comments. Crim says that both of them are bi and not really gay. D says that he himself is gay and Crim is too, especially since D has been letting Crim have as much sex as he wants with him for years. Crim has trouble accepting his homosexuality and walks out of the room to think some more about the relationship.

After some thinking Crim goes back into D's room and lays down in bed next to D. D repeats that he is not asking for Crim to come out but to just stop the hateful homophobic comments. Also, D is concerned because Crim's eight year old son is now beginning to emulate Crim's hate speech because Crim is the role model for his son. Finally, D gives the ultimatum that if Crim says one more homophobic comment D is ending the relationship. Crim agrees to the terms and they both kiss passionately.

At the end of the film, life goes on between Crim and D without the homophobia. 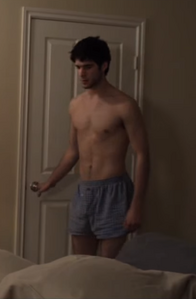 D after asking Crim to leave 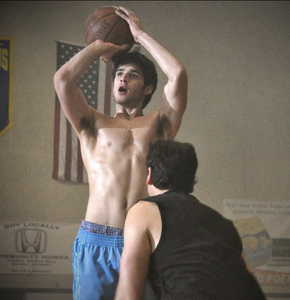 D and Crim playing basketball
Add a photo to this gallery
Retrieved from "https://hero.fandom.com/wiki/D_(Triple_Standard)?oldid=1840938"
Community content is available under CC-BY-SA unless otherwise noted.