Daenerys Stormborn, Dany, Mother of Dragons, Breaker of Chains, Mhysa, the Dragon Queen, the Queen Across the Sea, the Silver Queen, the Unburnt, the Dragon's Daughter, Khaleesi, Queen of Nothing, Queen of the Ashes, Mother, Silver Lady, Dragonmother, the Mad King's daughter, Breaker of Shackles, the Queen, Moon of My Life (by Drogo)

Resistance to fire and high temperature

Feeding her dragons, spend time with her court and Jon Snow

Daenerys "Dany" Targaryen, also known as Daenerys Stormborn, is a central character and one of the four main protagonists of the A Song of Ice and Fire novels series and its HBO adaption Game of Thrones. Daenerys is one of the last members of the exiled House Targaryen and becomes later known as the Mother of Dragons, after she gives birth to 3 of the legendary creatures. Her goal is to steal the Iron Throne of Westeros as the 'rightful heir', from the people that forced her family out decades before.

Daenerys is one of the last members of the exiled House Targaryen. She is the only daughter of King Aerys II Targaryen and Queen Rhaella Targaryen, and the younger sister of Prince Rhaegar Targaryen and Viserys Targaryen. Born during the end of Robert's Rebellion, Daenerys was smuggled across the Narrow Sea with her brother, Viserys, by Ser Willem Darry, to the Free City of Braavos. After Darry died of old age, the two were forced to flee from one city to another to avoid her King Robert I Baratheon's assassins. At some point of the story, Viserys made her his heir, and after his death, Daenerys inherits his claim to the Iron Throne and begins plotting to steal it from the people that forced her family out decades before. She's also the cousin of King Stannis Baratheon and the aunt (and lover in the TV series) of Jon Snow.

Daenerys was portrayed by Emila Clarke, who portrayed Qi'ra in Solo: A Star Wars Story and Sarah Connor in Terminator Genisys.

Daenerys is the only daughter and youngest child of King Aerys II Targaryen and his sister-wife, Queen Rhaella. She was named after the first Daenerys in her family and was most likely named by her mother.

Daenerys was conceived during the last month of the rebellion that would ultimately end her family's reign over the Seven Kingdoms. Shortly thereafter, her mother was sent with the young prince Viserys to the family ancestral seat of Dragonstone to escape the incoming Sack of King's Landing. Daenerys was born while a great storm raged above Dragonstone, sinking what remained of the Targaryen fleet, for this reason she is sometimes known as "Daenerys Stormborn." Her mother died in labor.

By this time, the war was already lost. Robert Baratheon had claimed the throne and Aerys had already been killed along with the rest of the royal family, leaving Daenerys and her older brother Viserys as the only known living Targaryen heirs. As Stannis Baratheon was preparing to sail from Storm's End, the garrison at Dragonstone decided to surrender and turn them over to the rebels in exchange for their lives, but before they could act on this plan, Ser Willem Darry and several other loyal retainers rescued the children and smuggled them into exile, sailing to the Free City of Braavos, where they lived for years in a house with a red door. Ser Willem was old and sickly, but Dany remembers that he always treated her kindly. After his death, the servants drove the young Targaryens from the house. Dany wept as they were forced out.

The Targaryen loyalists who raised the two children considered Viserys the rightful ruler of the Seven Kingdoms despite the family's defeat and exile, as did Viserys himself. He regarded it as his duty to revenge himself on the usurpers who murdered his family and reclaim the birthright that had been stolen from him when he was only a child. In the years that followed Ser Willem's death, Viserys wandered the nine Free Cities with his sister, trying to raise support to retake the Iron Throne, which earned him the mocking title of "The Beggar King."

As a result of this long humiliation, Viserys grew bitter and obsessed with his long-denied birthright. Dany was the only convenient target for his frustration, and over time he even came to blame her for their mother's death. He took pride in his lack of control of his own temper, regarding it as proof that he was a true heir to the Targaryen kings; he regularly warned Dany not to "wake the dragon" by angering him. He often spoke to her of the importance of preserving the purity of their royal bloodline through the ancient Valyrian practice of dynastic incest, so Dany grew up believing she would one day wed her brother. She was bright enough to realize that most of Viserys' plans for retaking the Seven Kingdoms were unrealistic, and as she had no memory of Westeros herself, his dream meant little to her; instead she longed to return to the house with the red door, which in her mind became a symbol for the childhood she had lost. With no family other than the abusive Viserys and no expectation of ever escaping his control, Dany grew into a fearful and docile young woman.

Viserys and Daenerys eventually found the help they sought in the Free City of Pentos, in the form of a rich and powerful magister, Illyrio Mopatis, who invited them to stay in his mansion and offered his help in reclaiming their throne.

Daenerys is polite and well spoken, but filled with quiet determination. She used to be cowed by her brother's ambitions and his occasional cruel rages, but her time amongst the Dothraki has taught her pride, confidence and skills of command. She is still somewhat naive of the world due to being young and living her life as an exile (with only her petulant brother to rely on for knowledge), but she is intelligent and quick to understand now that she is free to pursue her own path.

Daenerys spent her entire life living on the sufferance of others, bouncing back and forth between one benefactor or the next (like Illyrio Mopatis) with her brother, until whatever dreams they had of supporting the exiles' claim wore off and they'd have to move on to another patron. As a result, Daenerys has never known a true home. Constantly living under her brother's domination has given Daenerys a great empathy with the downtrodden of the world. She is deeply sympathetic to those she perceives as oppressed, while at the same time, her pent up frustration from years of being mentally and physically dominated by her petty would-be-king of a brother make Daenerys capable of being utterly ruthless against those she perceives as oppressing others. This has produced a large amount of black-white thinking in Daenerys's mind, and she can be idealistic to a fault. For example, on seeing the plight of the slaves in Slaver's Bay, Daenerys becomes determined that she must free all of the slaves in the region - with little thought devoted to the practical after-effects which will result from this. A particular example is when the Great Masters of Meereen crucified 163 children as a warning. After she took the city, she had 163 of the slave masters crucified in retribution, unconcerned about any negative political fallout which would result.

Unlike others in her house, Daenerys has almost not exhibited the "Targaryen madness" that plagued her father (and to a lesser extent, Viserys). She can be ruthless to her enemies, but while Viserys was cruel and demanding to his servants and even his benefactors, Daenerys reciprocates the loyalty of those who follow her with gratitude and compassion. On the other hand, insanity was often a late-onset condition in the Targaryens, and some examples can point out that it might affect her: the execution of the 163 Great Masters of Meeren and have the daughter of a likely innocent wineseller "questioned sharply" in front of him. Daenerys was given the nickname "the Mad King's Daughter" by some people during the rule of Meereen.

In the show, she once said, "Who is innocent? Maybe all of you are, maybe none of you are. Maybe, I should let the dragons decide". She states that it doesn't matter if they're all innocent or not, which could be considered similar to how Aerys reacts to a might be rebellion from Brandon and Rickard Stark.

Daenerys has at times a quick temper and a short patience, and has felt remorse over some of her actions taken in anger. Daenerys' personal wish is to see the house with the red door at Braavos which she considers her real home, yet she feels it's her duty to take the Iron Throne for House Targaryen. She also believes she's the one who must save the Westerosi people. While most of the nobility of Meereen hates her, there are also nobles who help her and support her, like the Green Grace Galazza Galare. Daenerys' lust for Daario Naharis is considered poison by most of her followers.

One flaw that causes some to have doubt about Daenerys is her refusal to hear the hard truth about King Aerys II. She often idolizes her father as an hero like Viserys did. She views the Baratheons, the Starks, the Lannisters, the Arryns, and the Tullys as traitors and evil, and was glad to hear about Lord Eddard's death. In the TV series, Daenerys eventually acknowledges her father's madness. Robert Baratheon, Eddard Stark, Jon Arryn, Stannis Baratheon, Tywin Lannister, and Hoster Tully are known as the "Usurper's dogs" in Daenerys' eyes.

However, in the penultimate episode, Daenerys became an anti-villain, believing her increasingly ruthless quest to become Queen of the Seven Kingdoms is just as it will enable her to make the realm a better place.

House Targaryen was once a noble Valyrian family with lonely residence to the island of Westeros, Dragonstone. The Valyrians were an empire of sorcerers and had found a way to mix dragon genes with human ones in order to be able to communicate with dragons, thus the lords of Valyria were later born with silver-hair and purple eyes, including the Targaryens. After the Doom of Valyria, the Targaryens of Dragonstone were the only ones in the west of the world with dragon blood in them, so to keep their line pure they engaged with traditional incest between close relatives, otherwise they would simply end up born as ordinary humans, as pure Targaryen and dragon genes on humans are very weak. For example, Baelor Targaryen (son of King Daeron II), Rhaenys Targaryen (daughter of Prince Rhaegar) and Jon Snow look nothing like Targaryens and posses no heat tolerance. 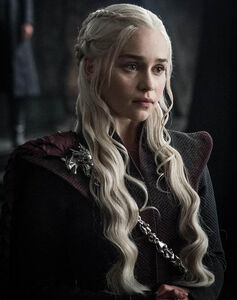 Daenerys in the HBO series. 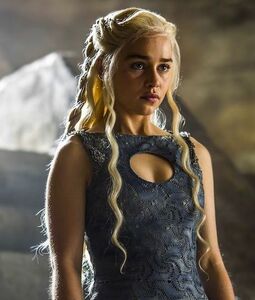 Daenerys in the Season 4. 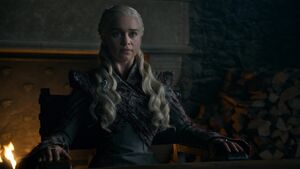