NOTE: This article is about the incarnation of Dahlia from The Angry Birds Movie Duology. The mainstream version can be found here: Dahlia (Angry Birds).

?
Dahlia is a tan and brown long-eared owl who is a student of Avian Academy in the The Angry Birds Movie films.

Dahlia also has a moderate wingspan and average-length, slender, scaly legs that match the color of her beak.

She is the motherly figure of the Stella Flock and is one who expects no-nonsense from the others. She is smart, and her species, owls, are often a symbol to represent wisdom.

She has two squarish pieces of hair which she uses to walk and dance and enjoys fixing/building things, as in the cover art she is shown to be holding a telescope she (by assumption) fixed or put together. She loves fun, being adventurous, and being creative, just like the rest of her friends.

Dahlia was first seen at the court trial with Gale right next to her.

After they come back to Bird Island, she helps repair the once damaged Bird Village for reconstruction purposes.

We last see Dahlia looked shocked after she and many others saw that Terence can sing, which is everyone's common reaction towards that anyways. 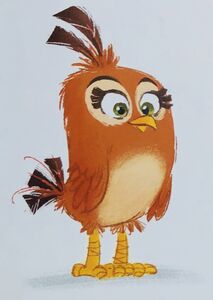