Mother of the Witch

Chance of redemption
Protecting Sharon from the cultists.

She is portrayed by Deborah Kara Unger.

Dahlia was a member of a religious cult led by Christabella based out of Silent Hill, West Virginia, which appears to worship a female deity. A small shrine to this deity can be seen in Dahlia's apartment, which overlooks Nathan Drugs.

When Dahlia was around 24, she gave birth to an illegitimate child named Alessa, whose father she refused to name. Because of this, Alessa was ostracized by the townspeople and was considered to be a witch and "sin incarnate". In addition, it is possible Alessa possessed witch-like psychic powers, as shown in the original script. Alessa's ostracism weighed heavily on Dahlia, who loved her child, but was unable to stop the machinations of the Brethren.

In November 1974, Alessa was sexually assaulted by the school janitor and Dahlia was called to the school to take her home. When she arrived, Christabella tried to convince Dahlia that Alessa was "filth" that must be "purified", but was vague about what it entailed. Dahlia agreed despite not knowing entirely what Christabella would do to Alessa. Alessa was taken to the sacrificial chamber located in the Grand Hotel. In the hotel, Christabella asked Dahlia to leave, saying "We fight the sin, not the sinner", and dragged a screaming Alessa through the secret doorway.

Dahlia realized she was tricked and deceived and that the cult intended to kill her child. She ran to get the police, returning sometime later, only to find Alessa shackled onto a large iron seal, still alive with fourth degree burns over her entire body. Dahlia screamed at the sight and was dragged away by the police, while officer Thomas Gucci removed Alessa from her shackles and carried her to Brookhaven Hospital.

Soon, Dahlia was brought into Alessa's Otherworld and was forced to live with the horrific monsters conjured by her daughter's rage, as well as her immense burden of guilt for not being able to protect Alessa. She was cast out of the cult, which comprised the sole remaining people living in the Alessa's alternate world and was looked on with disdain by their members.

30 years later, Dahlia appears to be very haggard and unclean, wearing old rags, with matted, unwashed hair and long, dirty toenails and fingernails. Dahlia seems to be the only one not to be attacked by the creatures because "Mother is God in the eyes of a child", although this hasn't been entirely proven and it is still possible the monsters are somewhat hostile to her. In other words, Dahlia is likely immune to the dangers of the Fog World and the Otherworld because Dahlia is the mother of Alessa, who controls these worlds, and is still loved by her.

Dahlia apparently doesn't know where Alessa is and searches endlessly for her. Likewise, it is unknown why Alessa doesn't reunite with Dahlia either. It is possible this is because Alessa is bedridden and the path to her hospital room in Brookhaven is dangerous. It is also possible Alessa doesn't want her mother to see her in such a poor pathetic condition, covered in bandages with melted skin, as it may intensify her mother's guilt and worsen her mental health. A final possible reason is that Alessa may have vowed that she wouldn't reunite with her mother until she completed her revenge on the cult.

The cultists seem to let Dahlia live instead of killing her. This is presumably because they know that if they kill Dahlia, then Alessa's rage would only intensity their torment. For the most part, they seem to leave Dahlia alone, but if she is near, they throw rocks at her. Dahlia's mental health has deteriorated dramatically and she has slight dementia, but she has become wise through suffering. During the events of the film, Dahlia lives in the apartment above Nathan Drugs.

Rose Da Silva, a woman who has become trapped in the alternate reality, first comes into contact with Dahlia when she finds herself at a steep drop-off which signals the end of the Fog World. Dahlia tells Rose about the child she lost, and then becomes infatuated when she sees a picture of Rose's daughter Sharon in her locket. She tells Rose that Sharon is her child, and tries to take the locket from her. Rose becomes frightened and knocks Dahlia to the ground before running off.

Dahlia is later seen in the Grand Hotel, trying to avoid rocks being thrown at her by a young cult member named Anna. Anna tries to attack Dahlia with a knife, but Rose and officer Cybil Bennett stop her. Dahlia reminds Anna that the current situation of Silent Hill is the cult's doing and runs off before Rose can question her. Anna informs Rose and Cybil that Dahlia was cast out by the cult and that "not even the darkness wants her".

After air raid sirens sound through the town, the three women arrive at the local church to find Dahlia on the steps, trying to speak to the cult members. Dahlia grabs Cybil and warns her not to go into the church, telling her the cult members are "damned". Rose then confronts Dahlia, demanding to know why Sharon is identical to Alessa and if Alessa is dead. Dahlia cryptically tells her "Evil wakes in vengeance, be careful what you choose." The Darkness then overtakes the town, and Anna is slain by Pyramid Head after she tries to throw another rock at Dahlia.

The missing Sharon is found hiding in Dahlia's apartment and is kidnapped by cult members as Dahlia tries to defend her. Both of them are taken to the church, where Dahlia is knocked unconscious by a cult member with a wooden log.

Dahlia awakens as Alessa's tainted essence bleeds out of Rose and looks on in terror as Alessa and Dark Alessa rise into the church to take their final revenge. As the killing continues, Dahlia confronts Alessa, sadly asking her what has she become.

Once Alessa's revenge is completed, Dahlia is left alive on the church steps. She asks Rose why Alessa didn't take her with the others, to which Rose reminds her that she is still Alessa's mother, and "Mother is God in the eyes of a child". Dahlia seems to realize that Sharon is now Alessa, and watches in silence as her child leaves the church with another mother.

Dahlia appears in Silent Hill: Revelation, the sequel to Silent Hill. Dahlia appears to have adapted her physical personality from the original game, rather than the ragged being she was in the first film. She is still apparently trapped in the Fog World of Silent Hill, but she doesn't seem to mind.

Heather Mason, an older, renamed version of Sharon, meets Dahlia and accuses her of letting the Order, the new version of the first film's cult, burn Alessa. Dahlia sorrowfully denies this, stating that she loved her daughter dearly, but was tricked by the cult into giving her up. Heather asks about why the Order wants her. Dahlia explains that the Order wants to recombine Alessa's soul so they can force her to give birth to their god. The Otherworld then takes over, and Dahlia tells Heather to run and find shelter inside, where it is slightly safer.

Dahlia's fate is ultimately unknown, but she is presumably alive and still trapped in the Fog World of Silent Hill. In the original script, Dahlia dies, but the script isn't necessarily canon to the film. Considering how Christopher Da Silva is still in the Fog World to search for Rose, it can be theorized that Dahlia will act as a guide for Chris. 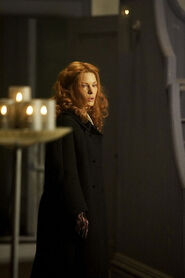 Dahlia in the Grand Hotel. 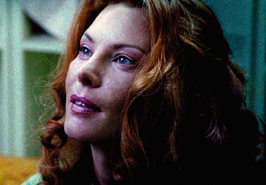 Dahlia seen in a flashback.

Dahlia hugging and comforting Alessa after her molestation. 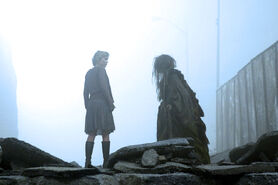 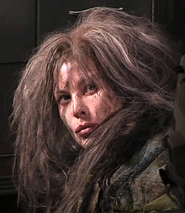 Dahlia warns Cybil about the cult. 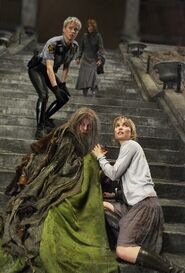 Dahlia on the church stairs.

Dahlia being ignored by the cult. 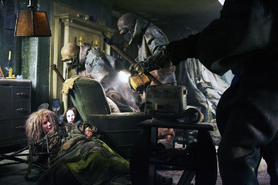 Dahlia tries to shield Sharon from the cultists. 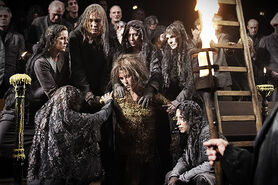 The cultists hold Dahlia in place as they prepare to burn Cybil. 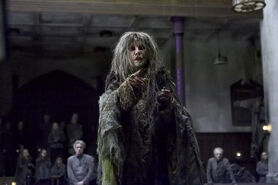 A deleted scene of Dahlia speaking in front of the cult.

Dahlia awakens during the massacre.

Dahlia walkng through the gore.

Dahlia in the church.

Dahlia in the church. 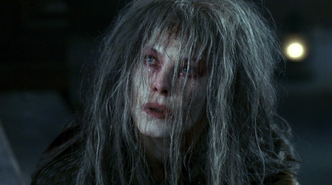 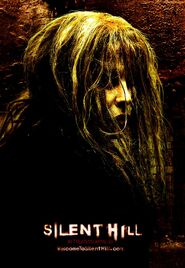 Dahlia warns Heather that the darkness is coming.
Add a photo to this gallery
Retrieved from "https://hero.fandom.com/wiki/Dahlia_Gillespie_(film)?oldid=1929730"
Community content is available under CC-BY-SA unless otherwise noted.