Her giant radiation form into Dakotazoid and super strength

Her men taking photos of herself, making a few friends, eating and spending quality time with Sam

No information
Dakota is one of many contestants in the Total Drama series.

She was voiced by Carleigh Beverly.

But in her mutated form. she has spikey green hair, yellow and red eyes, and her same clothes only ripped, plus without her shoes and necklace.

Dakota is shown to be picky, fame hungry and sometimes selfish. And is obsessed with her looks and being on camera.

So badly she has hired a paparazzi to take pictures of her 24/7 but usually gets put to a stop by chris.

However Dakota is shown to be kind and polite to her contestants. Also far from heartless to show shes no villian or bully.

Dakota is first introduced in "Bigger! Badder! Brutal-er!" on a yacht with the other twelve contestants. When Chris introduces her, she begins to talk, but is cut off when Chris introduces Anne Maria. This annoys her, and she shoves Anne Maria out of the camera's view. Then, Anne Maria angrily sprays her in the face with spray tan in retaliation. After Chris blows up the yacht, Dakota is seen in a lifeboat being photographed by paparazzi. She playfully asks how they managed to find her, only for them to reply that she texted them the location. This annoys Chris who assigns Chef to blow up the paparazzi's boat. Dakota is later placed on the Toxic Rats team after finishing the race in tenth place. When Anne Maria arrives after her, Dakota waves to her, which causes Anne Maria to glare back at her. When a mutated squirrel appears in front of the teams, she kneels down to it, saying she wants one. However, when the squirrel roars and shoots electricity out of its eyes, she screams and runs away, jumping into Sam's arms. In the first challenge of the season, Dakota saws down the Rats' totem using a saw despite not knowing how to use it until Dawn tells her to pretend it is "daddy's steak knife." Although the Toxic Rats arrived first, her team loses the challenge after their selected cabin explodes and she, along with the others, end up annoyed with Staci's chatter. Dakota is in the bottom two in the first Campfire Ceremony of the new season, but is safe and receives the final marshmallow after Staci receives the Marshmallow of Toxic Loserdom.

In "Truth or Laser Shark", Dakota is woken up by Dawn's conversation with a bird. When Dawn reveals she knows why Dakota wants fame, she freaks out and tries to go back to sleep. Later, she wakes up with bags under her eyes, saying she needs more beauty sleep. She talks to Sam, who develops an attraction towards her and tries to complement her, but fails. She is confused by his compliment and tries to return the favor, but has nothing good to say to him. Before the first challenge, Chris takes away Dakota's phone. However, Dakota uses a back-up phone in the challenge, which is ruined by water. In the challenge, the two teams tie which leads to part two. Before part two, Sam says he and Dakota have a lot in common. She dislikes this at first, but then understands that Sam was only talking about the electronic withdrawal. In the second part of the challenge, Dakota is at the end of the challenge, with Cameron. She becomes too distracted by the paparazzi to compete and ends up losing the challenge for the Toxic Rats. All of the Toxic Rats besides Sam vote for Dakota. Thus, at the campfire ceremony, Dakota is eliminated, but she does not take the Marshmallow of Toxic Loserdom. She is in shock, saying she never got her spin-off series yet. She is asked by Chris if she has any last words, but before she can say them she is shot in the sky by the Hurl of Shame shortly after.

In "Ice Ice Baby", Dakota crashes her hang glider into the campfire during the Toxic Rats' elimination ceremony, colliding into and landing on top of Sam. She asks Chris to let her return to the competition, saying she needed more time on the camera. Reluctantly, he brought her back as an intern after getting a call from her father, who offered him a large amount of money to bring her back.

Dakota made a more prominent return in "Finders Creepers", as Chris' new intern. She was tasked with performing different duties around the camp during the challenge, such as waking the remaining contestants with an air horn. As the challenge progressed, she found Sam, who had fallen into a grave, and unknowingly poured kitchen grease all over him, attracting the presence of several large mutant maggots. She considered apologizing to him, but found this disturbing and instead left Sam. When the Mutant Maggots lost, Brick was spared as Chris decided to have him switch teams, and decided to make Dakota take the Hurl of Shame instead, for the second time. Despite this, he did inform her that she still has a job as an intern as long as she swims back.

After being thrown into the lake to be mauled by piranhas by Chris, Dakota returns to the island again with original contestant Bridgette on a canoe in "Backstabbers Ahoy!". The two of them are required to demonstrate the challenge to the other contestants. When Fang attacks the canoe, Dakota quickly clings on to Bridgette. Later, the two of them have to demonstrate to the others on how to set off the mine. When the mine explodes, Dakota was sent flying onto a buoy. Dakota remains there for the rest of the episode while trying to fend off Fang.

In "Runaway Model", Dakota becomes closer with Sam. He asks for her fashion advice in order to help the Toxic Rats with the challenge, which she does, telling him that stripes are in. She then calls her paparazzi to take pictures of her being helpful, and they arrive. However, instead of taking pictures of Dakota, they take pictures of Sasquatchanakwa, which angers her. She is angered even further when Sam uses horizontal stripes instead of vertical stripes. When Sam competes in the challenge, Dakota cares for his well-being. Before Sam takes the Hurl of Shame, Dakota tries to give him her number. Although Sam is hurled before he can hold on to the paper with her number, their relationship finally becomes mutual.

In "A Mine Is a Terrible Thing to Waste", Dakota is seen reluctantly filing Chris' toenails before the opening sequence. Later, she is used to test the mine for the challenge that day, but due to her staying later in the mine than the designated time, she loses her hair from the radiation. Following Anne Maria's elimination, Chris decides to fire Dakota from her job as an intern, but makes her rejoin the competition as a member of the Mutant Maggots, which she is not happy about. In "The Treasure Island of Dr. Mclean", Dakota is first seen stranded on rafts out in the water along with the other contestants, asking Cameron for hair gel. In the confessional, Dakota expresses her desire for an ally, naming Zoey as the most likely candidate. As Chris explains the challenge, Dakota begins to undergo a startling transformation due to the radiation she experienced in the mine. This causes her to grow more monster-like as the episode progresses. She does not help with getting her team's raft to shore, but beats back Fang when he attacks them. When the Maggots get to shore, Dakota is happy to see that Sam returned to be apart of the challenge. However, after Chris explains how he kidnapped and hid Sam underground, Dakota becomes infuriated, completing her mutation into a gigantic monster. Once they arrive at the swamp, Dakota immediately rushes in, determined to find Sam. Later, when the Tentacled Alligator attacks Zoey, Dakota viciously fights it, to defend her friend. She eventually throws it into the vine patch, clearing a path for the others. When Jo finds the chest Sam and Gwen are in, Dakota knocks her out of the way, and tosses Gwen aside. She then lifts Sam out of the chest, and happily hugs him. Despite this, her team ends up losing. At the elimination ceremony, Scott is eliminated, but surprisingly he plays the Maclean-Brand Chris Head, neglecting all the votes against him, and eliminating Dakota who got votes from Scott, and Zoey. She does not seem to care however, and kisses Sam as they take the Hurl of Shame together.

Dakota is seen once again in "Brain vs. Brawn: The Ultimate Showdown", still mutated, with rest of the eliminated contestants where she roots for Cameron. When the mutated animals began to attack the cast, Dakota fights the Giant Turtle, who was crushing Sam between his legs. She is last seen celebrating in Cameron's ending, and disappointed in Lightning's ending and then leaves the island along with the other contestants and Chef.

Although Dakota did not compete, she was mentioned in the first episode by her boyfriend Sam, who pulls out a picture of the two of them together, still a mutant. He mentions that his motivation for returning was to expose himself to toxic waste and become a mutant like her.

Dakota is mentioned once again by Sam in "Saving Private Leechball", telling his teammates that Dakota would bring him through the forest without difficulty. 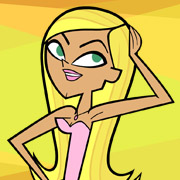 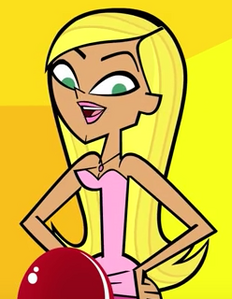 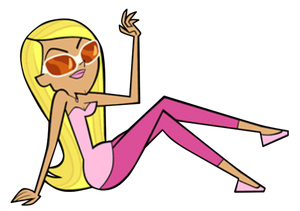 Dakota in a black shirt. 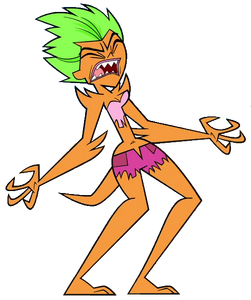 Dakota in her pajamas. 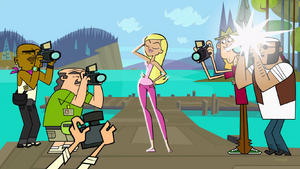 Dakota posing for her paparazzi in the intro... 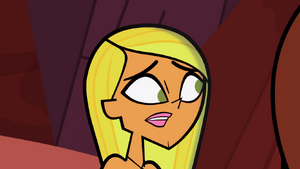 Dakota learns that she has been eliminated 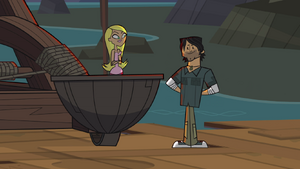 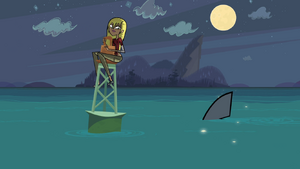 Fang is shown circling Dakota at the end of Backstabbers Ahoy!
Add a photo to this gallery

Retrieved from "https://hero.fandom.com/wiki/Dakota_Milton?oldid=1962482"
Community content is available under CC-BY-SA unless otherwise noted.