Dale Alvin Gribble (born July 12, 1953) is one of the main characters of the animated comedy television series King of the Hill. He is voiced by Johnny Hardwick.

Dale is 6'1" and is 145 lbs. He is a scrawny, pale man with sandy blond hair which is balding. He wears an orange mack cap, an orange polo-shirt with a left breast pocket, dark blue jeans and brown boots. He also wears a grey watch on his left wrist and glasses with sunglasses clip-ons.

He is married to his wife Nancy and has a stepson named Joseph Gribble. Despite being paranoid about the government and getting on Hank's bad side in some episodes, he has shown a lot of love to his wife and kindness to his friends, has had an occasion by helping Hank and his friends, and is at times is an antagonist but he is also a protagonist.

Dale does good things whenever he knows he messed up bad. 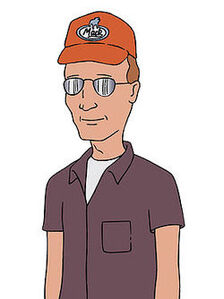 Add a photo to this gallery
Retrieved from "https://hero.fandom.com/wiki/Dale_Gribble?oldid=2087915"
Community content is available under CC-BY-SA unless otherwise noted.