Dalton is the main protagonist of the 1989 action movie, Road House. He was portrayed by the late Patrick Swayze, who also portrayed Sam Wheat and Cash.

Dalton is a graduate of New York University with a degree in Philosophy. He would later on fall into being a bouncer in clubs in New York City. He was picked up by Frank Tilghman, who owns the Double Deuce in Jasper, Missouri to become the new cooler at his club, which was practically a nightly warzone of degenerates picking fights. Dalton came in and he cleaned it up by firing people who weren't right for the job, drug dealers, or were thieves skimming from the cash register.

He would later on run into the man who thinks he owns Jasper, Brad Wesley. He saw Brad's bullying and deadly tactics when he destroyed businesses of those who don't go along with his program. Brad noticed how tough Dalton was when he confronted his men. Brad wanted to hire him, but Dalton simply replied "there's no amount of money."

Dalton would fall for this Doctor named Elizabeth Clay who returns his love. Later on however, he discovered that Brad Wesley was her ex. Later on, Dalton's teacher, Wade Garrett, the man who taught him all he needed to know about being a Cooler came to Jasper to assist his former apprentice in his war against Brad. Brad would then threaten to kill either Elizabeth or Wade. Brad would ultimately kill Wade. This upsets Dalton and he along with other business owners of Jasper had a final conflict with the tyrannical Wesley. Along with the business owners, Dalton kills Brad, they declared to Brad that it's their town.

Afterwards, the Double Deuce along with Jasper prospered all in no short favor to Dalton. As for Dalton, it's assumed that he lived the rest of his days with the lovely Elizabeth Clay. 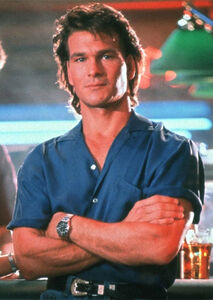 Add a photo to this gallery
Retrieved from "https://hero.fandom.com/wiki/Dalton?oldid=1849816"
Community content is available under CC-BY-SA unless otherwise noted.