Spending time with his father

Robin (real name Damian Wayne) is a fictional character and superhero in DC comis and universe, an is the major character of the Batman comics.

He is the son of Batman, the legendary vigilante and Gotham City's protector, and Talia al Ghul, a member of the League of Assassins. This makes him an heir to the world's greatest crime-fighter, and its greatest super-villain Ra's al Ghul. Damian became Robin, becoming the current incarnation, and teamed up with Dick Grayson when he was Batman after Bruce's apparent demise. Damian has also been a member of the Batman Family and the Teen Titans, and friend of Superman's son, Jonathan Samuel Kent.

He was created by Grant Morrison and Andy Kubert, and first appeared in Batman: Son of the Demon in 1987 as an infant, but was introduced in Batman #655 in September of 2006.

Having spent his gestation in a laboratory, Damian was raised by his mother until ten years of age, at which point she left him in the care of his father, who had not been aware of his son's existence until that point in time. Damian is violent and self-important, and was trained by the League of Assassins, learning to kill at a young age.

After the events of Batman R.I.P. and Batman: Battle for the Cowl, Damian has taken up the identity of Robin, becoming the fifth and current person to use the Boy Wonder's identity. He worked with Dick Grayson, who replaced Bruce as Batman for a certain time period. Morrison's Batman #666 (2007) depicts a future wherein Damian has become Batman. In Batman Incorporated #8, Damian is killed by his clone, The Heretic. However, he is soon resurrected, with temporary superpowers.

At the young age, Damian was raised by his mother to become a formidable warrior. He was raised by Talia al-Ghul and the League of Assassins. Damian became a seasoned martial artist by the time he is a pre-teen, at which Talia reveal his presence to Bruce (his father). She leaves Damian to Batman's custody in hopes that he could be an hindrance to his work.

Initially spoiled and pugnacious, Damian attacked Robin (aka Tim Drake) whom he wanted to replace as Batman's faithful sidekick, causing a ruckus in the Batcave. Batman promptly grounded him, but he escaped, wearing a special Robin costume and getting into conflict with Spook and killing the criminal.

Although Damian developed sociopathic and malicious tendencies, he, in truth, was genuinely proud to be Batman's son and wished to play his part in his father's war against crime.

Damian Wayne is the son of Bruce Wayne, who was Gotham's protector Batman, and Talia al Ghul, the daughter of the legendary Ra's al Ghul. Batman battled against the League of Shadows during his adventures, and met Ra's daughter and fell in love with her. Bruce didn't initially know about his son's existence, and Talia had him to become the successor of the League of Shadows, and was trained to become a unbeatable warrior. He was trained to be a master assassin and a martial artist before he was a pre-teen, and Talia believed that he could be the perfect heir since he had the Batman's DNA. When he was seven years, Talia tasked Damian to spy on Bruce Wayne and keeps tabs on him for her. Eventually, Talia revealed Damian's existence to Bruce when he was ten years old, and left Damian to Bruce in custody so he can raise him. Damian showed himself to be spoiled and aggressive, and attacked Tim Drake as he wanted to take over the mantle of Robin.

When Batman was presumably killed by Darkseid, his title was left up for grabs by Dick Grayson and Jason Todd, with the latter having become the Red Hood. Damian didn't believe that Grayson was fit to become the new Dark Knight, but helped Dick fight Jason Todd when the latter created a crooked version of the Bat suit. After Grayson defeated Jason, he became the new Batman and had Damian become his Robin. The two would often have their differences, but would work together to stop Batman's rogues gallery and protect Gotham in Bruce's absence. It's later revealed that Grayson chose Damian because he saw a need to improve his character, and didn't choose Tim because he saw him as an equal.

Damian mocked Tim Drake due to him losing the title of Robin, and Drake believed that Batman was still alive, going off to find him and taking on the mantle of "Red Robin". Though Damian was cocky and arrogant at first, he slowly became empathic and determined due to Grayson's teachings. During the "Blackest Night" storyline, Damian worked with the Bat Family in fighting off the Black Lantern Corps. Damian started to slowly distance himself from his mother, as Talia cloned Damian once she realized that her son had sided with the Batman Family. When being confronted by Talia, Damian rejected her, and was shown his clone before being informed that he was now an enemy of the League of Shadows.

Though Damian had improved personally, Grayson still saw that the child still needed friendship and compassion in order to make him better. Damian was taken to the Teen Titans, and Damian took immediate steps to become the leader of the team, and met Raven and Ravager. When Tim Drake returned to the Titans, Damian came at heads with him before leaving the team, seeing the group preferred Drake over him. Eventually, Bruce returned after traveling through time, and returned to take the mantle of Batman, and Damian returned as his sidekick. 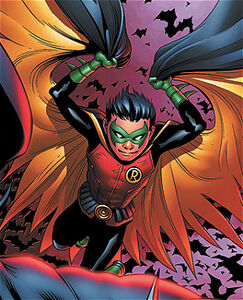 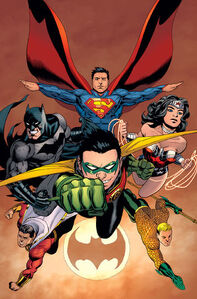 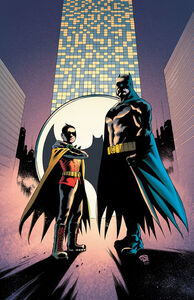 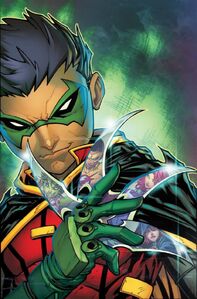 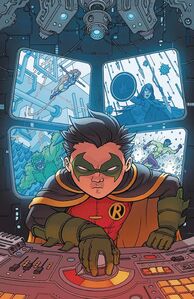 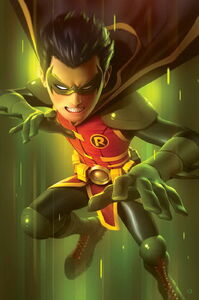 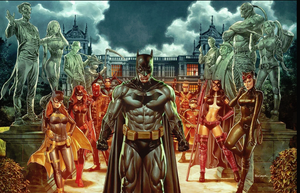 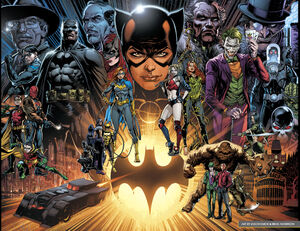 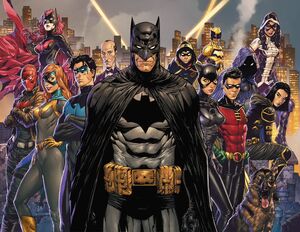 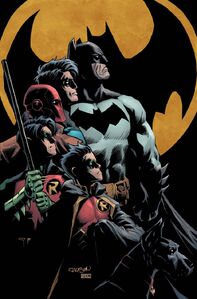 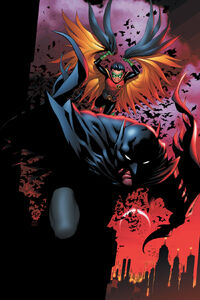 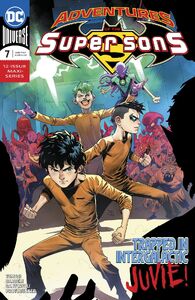 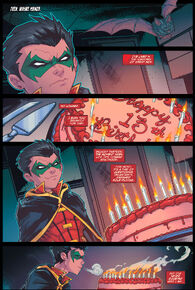 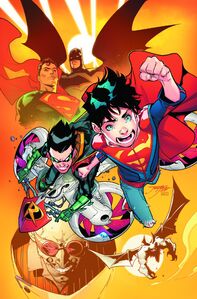 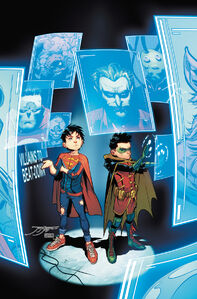 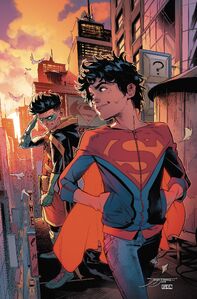 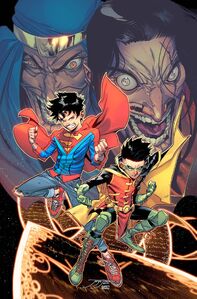 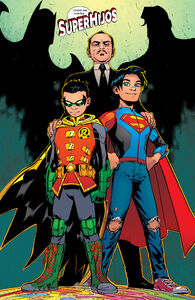 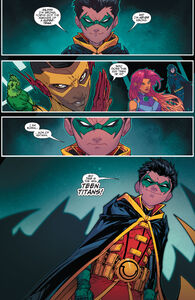 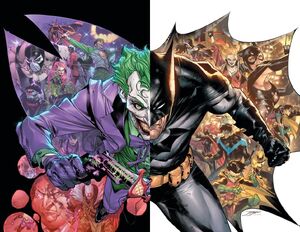 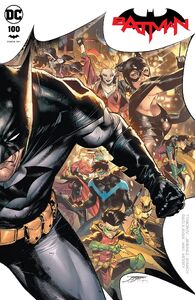 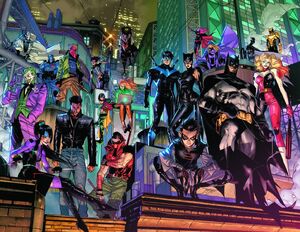 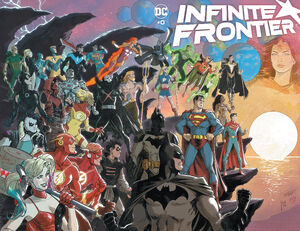 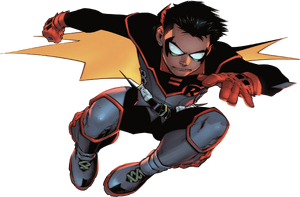 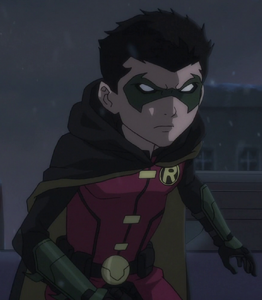 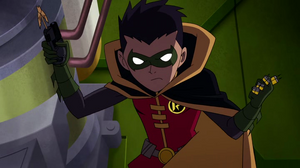 Damian Wayne in Batman vs. TMNT. 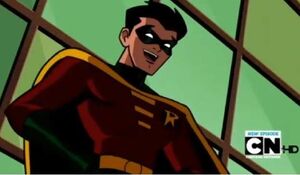 Damian Wayne in Batman: The Brave and the Bold. 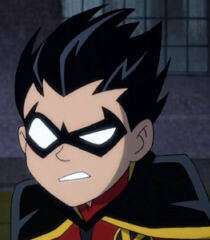 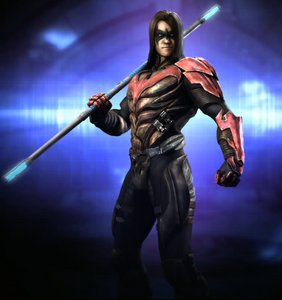 Damian in Injustice: Gods Among Us. 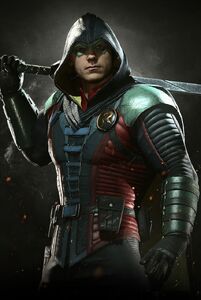 Damian in Injustice 2.
Add a photo to this gallery

Retrieved from "https://hero.fandom.com/wiki/Damian_Wayne_(Robin)?oldid=2247263"
Community content is available under CC-BY-SA unless otherwise noted.