Stop the Locust Horde.
Stop the Lambent threat (both succeeded).
Defeat the Swarm.

Despite his cynical and blunt personality, he has shown himself to be a capable and determined individual, and played a primary role in helping the Coalition of Ordered Governments in fighting back against the Locust with his inventions. After the end of the Locust Horde and Lambent Pandemic, Baird began his own company called DB Industries, and help rebuild the world after the war. When the Locust returned in a new form as the Swarm, Baird assisted Marcus and the COG in fighting against the new threat.

He is voiced by Fred Tatasciore, who also voiced Tai Kaliso in the same series, Shifu in King Fu Panda: Legends of Awesomeness, Nikolai Belinski in the Call of Duty zombies series, Poseidon in God of War, Zeus in God of War: Ghost of Sparta, Mario Auditore in the Assassin's Creed series, Soldier: 76 in Overwatch, Largo Potter in Valkyria Chronicles, Zon in The Secret Saturdays, General Monger in the Monsters vs. Aliens video game, Dingodile in Crash Bandicoot series, Piccolo in Dragon Ball Z, and Zeratul in StarCraft II: Wings of Liberty.

He joined the Coalition of Ordered Governments army on Emergence Day, and soon after met Augustus Cole, who became his best friend. Fourteen years later he was a member of Alpha Squad during the Lightmass Offensive, but joined Delta Squad along with Cole after the rest of the squad was killed. After the successful conclusion to the offensive, he was assigned to lead Sigma-One with Cole, taking part in several battles against the Locust.

During Operation: Hollow Storm, he once again rejoined Delta, and fought through the campaign to sink Jacinto. He joined the rest of the COG in its evacuation to Port Farrall and later Vectes, where the COG was forced to deal with the Stranded Insurgency, and later the Lambent Pandemic, during which Baird was often on the front lines helping formulate plans with the rest of Delta and command. When the COG collapsed, Baird joined the rest of Delta aboard the CNV Sovereign as part of the rapid response force that would assist several settlements the remnants of the COG had set up on the mainland.

By Gears of War 4, Baird started his own company of DeeBees, and is in a relationship with Sam. Reuniting with his friends and honorary nephew, JD Fenix, he helps them fight against the new threat - the Swarm.

Damon Bard was born presumably during the Pendulum Wars, and is the son of Jocelin Baird and Elinor Lytton. He was born into a wealthy family, but mostly referred to be around machines and crafting things during his childhood. Damon showed himself to be highly intelligent in his youth, getting perfects scores in high school, and studied at La Croix University when he was young.

Baird originally wanted to go into engineering school, but his parents refused to give him his inheritance unless he enlisted in the military. Six weeks after the Pendulum Wars ended, the Locust Horde emerged and attacked Sera, which would be known as Emergence Day. Many were killed during the event, but Baird managed to survive despite his parents being killed by the Locust.

On E-Day, Baird enlisted in the Coalition of Ordered Governments Army, and was assigned to Bravo Company of the 4th Ephyra Light Infantry a month after. Baird met and befriended Augustus Cole, who had stopped a fight that Baird participated in in a bathroom. Damon recognized Cole, a famous thrashball player, and stated that he was Sharks fan himself. Before the events of Judgment, Baird reached to the rank of lieutenant, and participated in the Battle of Kinnerlake alongside Cole.

Six weeks after the events E-Day, Baird became a member of Kilo Squad, an infantry unit that consisted of Cole, ex-UIR Garron Paduk, and Gear cadet Sofia Hendrik. Kilo was assigned to defend Halvo Bay during its destruction by the Locust Horde, which was led by General Karn. The team would fight against the Locust while trying to defend Halvo, and the group decided to launch the Lightmass missile in an attempt to stop Karn from destroying the bay. After retrieving the robot JACK, Baird and the squad disobeyed the orders of Ezra Pound Loomis, and launched the missile. Though the missile killed many Locust, Karn survived the missile despite the destruction of Halvo's museum.

Baird and his team were place on trial by Loomis, who ordered Kilo to explain the events that led to them launching the Lightmass. Kilo explained to Loomis why they launched the missile, but the trail was put on halt when the Locust breached the courtroom. Kilo worked with Loomis to fight Karn and his mount, Shibboleth, and managed to kill the general, thus ending the battle at Halvo. For helping him stop the Locust and Karn, Loomis dropped the charges he placed on Kilo, but demoted Baird to private for disobeying his orders.

Five years after the events at Halvo Bay, Baird and Cole became members of Alpha Squad and participated in the Lightmass Offensive. Alpha Squad were tasked with placing the sonic resonator to map the tunnels the Locust were using, but the squad were killed by the horde. Baird and Cole were rescued by Delta-One, which consisted of Lieutenant Minh Young Kim, and Privates Marcus Fenix and Dom Santiago. The group were attacked by the Locust Horde under the command of General RAAM, who proceeded to kill Kim, who had previously battled during the evacuation of Ilima. Going into the tomb, Baird was angered when Fenix was promoted to sergeant to lead Delta-One, but cooperated to defend the resonator while Marcus and Dom killed a berserker.

Seeing that they needed to enter the Hollow without air support, Dom advised they traveled to the Stranded to get a Junker to travel to an Imulsion facility. Going to the drill platforms, Delta-One entered the Hollow and fought more Locust before planting the resonator. Despite succeeding in their mission, Colonel Victor Hoffman contacted them and informed them that the resonator barely mapped the Locust tunnels. Baird discovered that a full map of the tunnels was at the Fenix estate, and traveled there with Delta-One to the East Barricade Academy. Delta-One managed to retrieve the data, but Baird and Cole failed to board the Tyro Pillar to detonate the bomb. Fenix and Santiago succeeded in boarding the pillar, and killed General RAAM before escaping, which resulted in the bombing of the Locust tunnels with the Lightmass bomb.

During Operation: Hollow Storm, Baird reunited with his friends after he was captured by the Locust, and revealed that the Locust were communicating with an underground worm. He also revealed that the Locust were "processing" humans, torturing them and Delta found Tai Kaliso, who proceeded to kill himself due to his torture. Delta attempted to escape from the area, but were eaten by the Rift Worm, but managed to kill it to escape and avenge the death of Private Benjamin Carmine. Colonel Hoffman then ordered Delta to travel to the New Hope facility to find information about the Locust stronghold.

After going through the facility, Fenix and Santiago return to Baird and Cole to travel to Mount Kadar. Delta then assaulted the nexus, and learned from the Locust computers that flooding the hollows could defeat the horde. Baird and the team then returned to Jacinto to evacuate everyone, and flood the city to defeat the Locust Horde after killing a imulusion infected Brumak. Despite stopping the Locust Horde from taking over Jacinto, the COG disbanded which led to the Stranded insurgency, and the Lambent pandemic.

During the Lambent pandemic, Baird worked with Cole, Samantha Byrne and Clayton Carmine to find supplies in Hanover. After collecting supplies from Cole's home town, the group were contacted by Marcus, who asked for their assistance in fighting a Leviathan that was attacking the Sovereign. Baird came up with the plan of using Tickers to kill the Leviathan, which worked despite the destruction of the ship. Baird and his group reunited with Marcus, Dom, Anya Stroud and Jace Stratton, and are given a ley from Richard Prescott before he dies. Damon reveals that Hoffman stole a data disc from Prescott a while back, and the group head to Anvil Gate to get the information from the disc.

After helping Hoffman battle off the Locust and Lambent, Baird cracks the disc with the key, and finds plans that led to a place called Azura. Marcus then orders Baird, Cole and Carmine to find reinforcements while the others traveled to get fuel to reach Azura. Going to Halvo Bay, Baird and Cole reunite with Paduk, and managed get a boat before Garron revealed what happed to Sofia after the events of Judgment. Baird, Cole and Carmine returned to Marcus and the group, and where shocked and angered at the loss of Dom. During the Battle of Azura, Queen Myrrah, the Locust Horde, and the Lambent were defeated with Adam Fenix using the Imulsion counter-weapon to destroy anything that had imulsion cells.

After the end of the Locust war, Baird began a romantic relationship with Sam, but the two never married by the events of Gears of War 4. He formed DB Industries and helped build New Ephyra, which led to the formation of a new Coalition of Ordered Governments under Anya. During this interwar period, Baird and Cole became the honorary nephews to Marcus and Anya's son, James Dominic "JD" Fenix. The new COG would be seen as totalitarian after Anya died, leading to the Outsider movement and the massacre of Settlement 2. Due to JD's involvement with the massacre, Marcus asks Baird to protect his son with the use of his technology and robots, and to inform him when he was in trouble.

Baird kept his word to Marcus to keep an eye on JD and his best friend, Del Walker when they worked with the Outisders to raid Settlement 5. Baird would assist his allies during the skirmish in Speyer, giving JD and Del assault suits to fight against the Swarm at the Tollem Dam.

Baird would return to serve in the Coalition of Ordered Governments, and started work with Marcus to develop new weapons to fight against the Swarm. 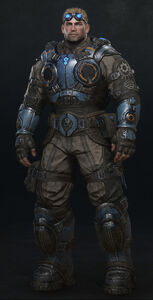 Baird in Gears of War: Judgement. 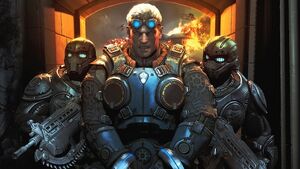 Baird being put on trial. 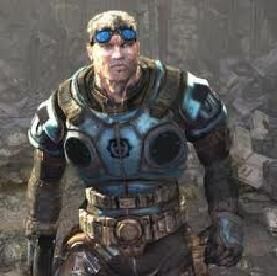 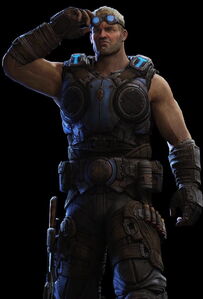 Baird in Gears of War 3. 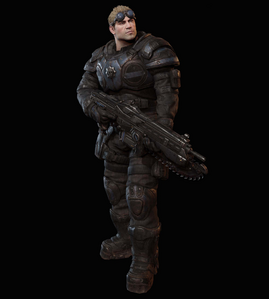 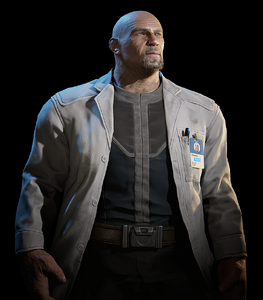 Retrieved from "https://hero.fandom.com/wiki/Damon_Baird?oldid=2311810"
Community content is available under CC-BY-SA unless otherwise noted.