Protector
Superhero
The Chosen One
Damon Henderson is Galaxy Green of the Galaxy Rangers. He is also Maya's husband. He is the tritagonist of Power Rangers Lost Galaxy.

Damon was a senior mechanic on Terra Venture and the Astro Megaship before Kai Chen took the ship to Mirinoi to save Mike Corbett and the future Galaxy Rangers (Kendrix, Leo and Maya).

Damon's wisecracking and playful nature can be deceiving. Although he is always ready with a quick comeback or witty remark, he takes his job as the Green Ranger very seriously. A top-notch mechanic, Damon's knowledge of the Astro Megaship is an invaluable asset to the team. His training as an amateur boxer gives him an extra edge when fighting the forces of evil.

In Lightspeed Rescue, after Trakeena survived her final battle with the Galaxy Rangers in Journey's End, Damon joined his teammates and helped the Lightspeed Rangers defeat her once and for all. 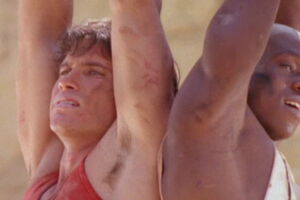 Damon and Leo chained up
Add a photo to this gallery

Retrieved from "https://hero.fandom.com/wiki/Damon_Henderson?oldid=2183245"
Community content is available under CC-BY-SA unless otherwise noted.