Damon Salvatore is one of the main protagonists of The Vampire Diaries. After becoming a vampire, he became vengeful when Katherine chose Stefan over him. Promising his brother eternal misery, Damon would follow him, and see his brother deal with his blood lust. Damon would later change, fall in love with Elena Gilbert, whom he marries in the series finale and help his friends protect Mystic Falls.

Damon is portrayed by Ian Somerhalder who protrayed Dr. Luther Swann in the Netflix series V-Wars.

Damon was originally a very free-spirited young man, who was best friends with his younger brother Stefan Salvatore, both of whom were instantly smitten with the vampire Katherine Pierce. He had a positive relationship with Stefan and he held his position as elder brother in high regard, being the one to teach Stefan how to fight when they were younger. As a human, Damon also held a sense of duty as he enrolled in the confederacy, however their father saw him as very irresponsible and reckless, proving he was very much a free spirit who did things on a whim, taking no mind to what people thought.

Damon could be considered much the opposite to his brother in many regards. Whilst they both were respectful and polite, Damon had a dark side which came to play when he fell in love with Katherine, whilst initially terrified at the prospect, his love for Katherine and dependency for her affections made the choice easy and he willingly drank her blood and conspired with her to kill innocent humans, a trait which passed on to his vampire lifestyle. Damon was very naive as a human, he loved Katherine deeply and recklessly, regardless of the consequences and not caring that his father was ashamed of him. His carefree life fell apart when Stefan betrayed Damon by alluding to their father that Katherine was a vampire; information that resulted in Katherine being trapped and taken to a church to be burned, also doing whatever he could to get her back, even if it resulted in his death.

After he became a vampire, he left Stefan's side, wanting no part in the life of the man who betrayed him. He selfishly kept the fact that Katherine was still alive from Stefan, jealous that his brother had also been turned by their shared lover. By the time he appears in season one, he's been away from Stefan for at least eighty years (including the meeting in 1912), and he immediately begins taunting his brother, as a colder, more calloused version of his human self.

Throughout season one, Damon pretends to be arrogant and sarcastic, showing little to no regard for human life and using whatever people he can get his hands on as his personal playthings. He shows pity to neither Caroline Forbes nor Vicki Donovan, even going so far as to kill Stefan's football coach to "prove" that he has no humanity left. He is also portrayed as a very impulsive vampire, known for his self-destructive behaviour and his devious, sadistic mind. Despite this, he stays focused on his only goal: getting Katherine out of the tomb. This shows his ability for planning and forethought, and certainly the patience to wait one hundred and forty-five years for the necessary comet to return.

After Katherine is discovered to have been alive the entire time, and his reason for doing the things he has been doing shattered, Damon becomes more dangerous because he drinks alcohol constantly, bonding with others at the bar. He destructively taunts Alaric Saltzman about being the one to kill his wife, Isobel Flemming, but is confused when he finds that Isobel is Elena's birth mother. He tempts his brother with human blood, though he knows exactly what Stefan used to be, and when Stefan goes off the deep end, Damon helps Elena detox him. He also genuinely thanks Bonnie Bennett for disabling the device that could kill him, surprising her with his sincerity.

Every time his brother is put in a situation that endangers his life, Damon protects him, but he's not afraid to cause Stefan non-lethal harm. Despite his anger with Stefan for his actions in the past, he hangs around, protecting him and working with him, sometimes destroying the good in his life. Their perplexing relationship seems to center around Elena, who anchors them to Mystic Falls.

Elena is the oddity of Damon's behavior, the anomaly that makes his personality far from psychopathic. In the beginning of the first season, Stefan is prepared to give up on his brother, believing him to be an irreparable monster, but Damon displays true feeling for Elena. Elena Gilbert is physically identical to Katherine, the woman who turned him into a vampire, making her not only a constant reminder of what happened to him and Stefan, but a temptation to let history repeat itself. When Katherine reveals that she never loved him (in the beginning of season two), Damon reacts by trying to get Elena to admit that she loves him, and when she tells him that she loves Stefan, he reacts impulsively, set off by both Katherine and Elena choosing his brother instead of him. He kills Elena's brother, spending many weeks afterwards trying to make it up to Elena, showing true regret for his actions. Their relationship began with taunting and cruelty, but she became what he clings to for humanity; he became her occasional protector, a guardian of sorts. His impulsive actions often drive her away but she refuses to let him die, and he does the same for her.

With Elena influencing him throughout the second and third seasons, Damon becomes slightly kinder, if only for the fact that he no longer mindlessly kills and torments humans without good reason, and he controls himself to be strong for Elena's sake. He proves that he is capable of love, nobility, loyalty, and selflessness, masking the most intense of his emotions to spare himself from seeming weak, but expressing just enough to draw in a very small circle of friends (which he later drives away). He continues to claim that his emotions can be turned off, but several older vampires reveal that this is a lie; after a certain amount of time, a vampire has to pretend they can't feel. The only time Damon had ever admitted his pain was when Elena told him that she would never kiss him back, to which he responded, "Now I'm hurt".

About halfway through the third season, Damon believes that Elena is trying to turn him into Stefan by constantly telling him to be the 'better man.' Others continue to underestimate him and, to display that he doesn't care at all, he kills Alaric, with whom he'd developed a strong friendship. He also spends time trying to make it up to Alaric after his ring brings him back to life, treating him like a friend even though Alaric is extremely angry with him. He also snaps and feeds from Caroline's father, and, after a very violent fight with Caroline, he is confronted by Elena. He's even cruel to her, accusing her of trying to make him into something he's not. His inner turmoil continues when Katherine reappears, and he recklessly takes her offer of a "road trip", leaving Elena defenseless only because he is mad at her. When he returns, he displays genuine regret and, in one of his most tell-all, modest moments of the show, he tells her that he will never leave her again, showing his extreme love and devotion to Elena, and his regret for making another impulsive decision.

By the end of Season Five, Damon makes the biggest decision he's ever made; sacrificing his life to saved his brother and everyone else he cares about over on the Other Side. He was unable to come back in the process but was thankful to Elena that she had became a part of his life and for falling in love with him.

He compels her to forget that he said this (late in season two), because he believes it would be selfish to confuse Elena with his feelings. This is right after Stefan apologizes for making Damon turn in 1864, something that surprises Damon to the point of revelation; He realizes what he's been doing to his brother, all following one stupid mistake. In reality, what Damon said to Elena proves that she has been molding him into a better person, because before that moment, he never would've done something so selfless. Damon also admits to missing his human life before he drunkenly kills Jessica Cohen in the middle of the road; this secret is kept from everyone around him. He lets the girl go, but immediately chases her down and kills her anyway in an effort to prove that he doesn't really care. When his spirits are down, Damon solves his problems with alcohol (mostly bourbon), but he often uses violence and murder to console himself.

By his own testimony, Damon claims that the reason why he can control his vampiric urges is because he embraces what he is.

Damon is also very self-confident, given that he'll confront older, stronger vampires like; Lexi, Anna, Pearl, Elijah, Klaus, Rebekah, Kol, Katherine, Rose and Silas. Without hesitation, and without regard to manners, even when they themselves pose no signs of hostility towards him. He often taunts them, which results in him nearly being killed quite often as they are undeniably stronger than him; though of course, there were cases when he was able to best them on some occasions, as in the case of Kol and Silas. Further into season 4, Damon seems to have lost part of his authoritative and dominating personality, most likely because of Klaus, who is much stronger, older and more powerful than him.

Despite Elena's influence, it seems that he is a very vengeful person and it is routed in his core. After the torture he and Enzo experienced in the 1950's, he continued to carry out the revenge he swore to take even well into his and Elena's relationship. This also proves him to be very secretive, as he told nobody of his experiences, not even Stefan in the aftermath of the torture until it was revealed in the present.

When Damon fed on Joey in Total Eclipse of the Heart, he was shown to have no remorse or guilt over ripping the young vampire's head off.

Damon possesses all the standard powers and abilities of a non-original vampire. Although, Stefan has said that when at full strength, Damon "can be very powerful". However, he is still no match for older vampires who are much stronger and more powerful than he is.

In No Exit, Damon appears to have much increased strength when he feels the urge to feed on Vampire blood, he has all the abilities that a normal vampire would have except, enhanced to much more extreme levels making him much more powerful than vampires that are much older than him. For example Damon was able to break free from his chains in a matter of seconds when Enzo chained him up. Though this is something any-other vampire might not be able to do. Despite this, Damon is still no match for the Original Vampires and Klaus; the Original Hybrid. 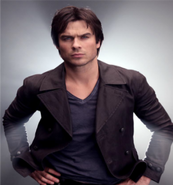 Add a photo to this gallery
Retrieved from "https://hero.fandom.com/wiki/Damon_Salvatore?oldid=1954999"
Community content is available under CC-BY-SA unless otherwise noted.