To introduce Lisa to his family (succeeded)

To reunite with Lisa (succeeded)

Daniel "Dan" Colman is the son of Dave and Sue, the brother of Julie and Jake, the grandson of Nan, the nephew of Jade, Claire and Tony, the uncle of Bert, the brother-in-law of Trevor, the boyfriend of Lisa and the main protagonist of the 2015 BBC Two one-off comedy-drama A Gert Lush Christmas.

He is played by Nathan Stone as a child and Russell Howard as an adult.

Dan first appears on Christmas Eve along with his girlfriend of 6 months, Lisa, in the bedroom of their flat in London before going to brush their teeth together. Rather than spend their first Christmas together in Barbados with Lisa's parents, the couple leave for Dan's hometown of Bamford in Bristol to visit his family. Upon arriving there, they are greeted by his parents, Dave and Sue, his siblings, Jake and Julie, and then Julie's husband, Trevor, and son, Bert.

Dan, along with his family and Lisa, goes to the pub where he gets embarrassed by his parents when they reveal that when he was four, he called his penis Keith and wrote to the Queen when a swan bite it. While getting drinks, he notices Dave clutching his chest, who tells him that it's just heartburn. After bringing over the drinks, Dan meets his oldest friend, Mark, who apparently is on a date with an older woman. Dan is embarrassed again when it's revealed that he once dressed up as Mariah Carey.

The next day on Christmas Day, Dan and Lisa wake up and give each other their presents. Dan gives Lisa a trip to Paris whilst Lisa in return gives him guitar lessons. Later, Dan and Lisa (donning Rudolph jumpers (with Dan's having a lazy eye like him) knitted by Sue) join the family for Christmas Dinner, where Sue brings up Dan's ex-girlfriend Jenny (whom he dated for a month when he was 19), much to Dan's embarrassment. Later that night, the family have a Christmas party at the home of Dan's aunt Jade and uncle Tony (who had recently been given the all clear of testicular cancer) where Dan and Lisa are seen talking with Sue, Jade and Dan's other aunt Claire who are keen to know when the two are getting married. Dan is led away by Tony who shows him pictures of the celebrities he has met (eg. Cannon and Ball, David Hasselhoff and Pat Sharp) and also tells Dan that he shouldn't get married, believing that single life is better. Tony then tells Dan about how in the 1980s when he was single, he went to Keith Chegwin's house and met and seduced two Latvian women (who thought he was a wizard) with nothing more than a slinky. Upon returning to the party, Dan notices that Lisa isn't there and is told by Trevor that Jenny is at the party before being told by Sue that Lisa is upstairs trying on Jade's wedding dress and also learns that the reason Jenny is at the party is that Jade knows her from Zumba. Dan asks Sue to get rid of Jenny, before trying to get to Lisa, but is told not to come in as it's bad luck.

Sue feels worried about Dan not having fun at the party and wishes there was a magic potion to cheer him up, so Tony, having misunderstood what Sue said, gives Dan a drink he has spiked with drugs which causes him to hallucinate and he starts licking a man's head. He then sees Lisa and kisses her, but he then realizes that it's is not Lisa he is kissing but Jenny. Lisa sees this and believes that Dan is cheating on her and slaps him across the face and storms off. The next day, Lisa has left the house and is not returning Dan's calls. However upon learning that Sue and Tony were responsible for what had happened, Dan shouts at his mother for "ruining his life" before storming out of the house and tries to get a train back to London, but the ticket lady believes he is being aggressive and calls for security. Dan then gets a call from Lisa who is still upset about what had happened and, despite Dan telling her that Tony had drugged his drink, won't let him come back to the flat.

Dan feels dejected and begins to have flashbacks of him and Lisa playing in the park and having a coffee together. With nowhere else to go, Dan goes to stay with Mark and for two days, stays in Mark's spare room room, before Mark encourages him to go to the pub with him, but Dan ends up drunk and is still misses Lisa. The following morning, Dan gets a call from Sue who sounds distressed, causing Dan to think Dave is ill and quickly rushes back to the house, but finds Dave perfectly fine and learns that it's the family dog Zorro who has fallen ill and is at the vets. Dan hugs his father, apologizing for his previous attitude, which Dave accepts. While waiting for news on Zorro, Dan and the family look at photos of him and watch a DVD called "Zorro the Wonderdog" which shows Dan as a child making it look like Zorro has magic powers such is turning people invisible and bringing back the dead. Whilst having dinner, the family get a phone call from the vets to tell them that Zorro is fine.

Later, Dan helps Sue with washing up and apologizes again for his attitude, saying that he didn't mean it and that he does love her. Sue asks Dan if he has spoken to Lisa, he replies that she hasn't returned his calls. Sue says to Dan that he should go and see Lisa, but he replies that Lisa said she wanted some space and says he can't stop thinking about her and starts to cry, but is comforted by Sue. Later when in the bathroom finishing brushing his teeth, Dan overhears Sue talking to Bert, who is upset that he can't do his magic tricks properly. Sue tells him that life is all about seizing opportunities and that if he sees a dream, he should follow it. She also says that Bert shouldn't worry about what other people think of him and he should do what his heart says and if he finds something he loves, he should never let go of that.

The next day, Dan sees Dave teaching Bert some dance moves and asks what are they doing, but Dave replies that magicians never reveal their secrets, before sending Dan away. Upon hearing "Let's Get Ready To Rhumble" by PJ & Duncan (which he and Lisa listened to on their car's radio on the way to Bamford) on the kitchen radio, Dan takes Jake's car and drives to London to see Lisa at the flat, only to find it empty before being told by his neighbour Roger that he saw Lisa leaving with a suitcase, making Dan think that Lisa has left to go to Barbados. Dan is then called by Sue who encourages him to return to Bamford, which he does.

Upon returning there, he sees Bert performing a magic show with Sue as his assistant. Bert asks for a volunteer to which Sue picks Dan, before gently tapping Zorro on the head with his wand (saying that the dog has the power to bring what you most desire) and making the lights go out. When the lights come back on, Dan sees to his surprise that Lisa has appeared and the two share a kiss with Dan mouthing to Lisa that he loves her. The two are then seen at the family's New Year's party, sitting out in the hallway embracing, where Lisa reveals to Dan that Sue had driven her from London and told her about Tony and the drugs. Dan points out that he told her that to which Lisa replies that she didn't believe him because she saw him kissing Jenny and that she (Jenny) was blonde and perfect, but Dan points out the things Lisa has that makes her perfect. The two agree to go to Barbados the next year, before they are joined by Sue who wishes them a happy new year. Dan tells his mother that she is amazing while Lisa says that she is Gert Lush. After Sue leaves to return to the party with Dave, Lisa says that she loves the Colmans, to which Dan replies that he really loves her.

Dan is last seen at the end of the film saying that his new year resolution is to spend every moment with Lisa whilst Lisa says that she is more interested in Keith to which Dan replies to her if he could see Sandra (meaning her vagina).

"I don't see the point of flavored condoms."It's not like my fanny can taste." (Dan to Lisa about Sue)

Dan, Lisa and his mother Sue 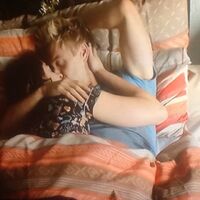 Dan and Lisa kissing in bed on Christmas morning.

Dan's reaction to the jumpers Sue made for him and Lisa 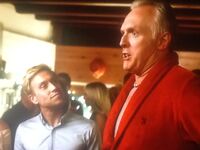 Dan and his uncle Tony 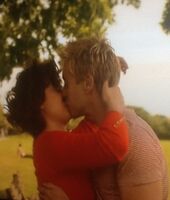 Dan and his sister Julie 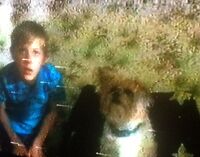 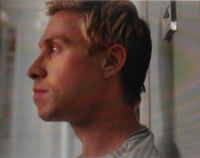 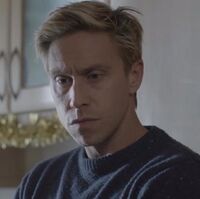 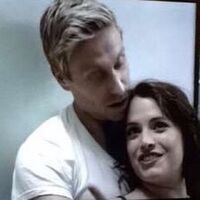 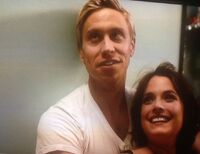 Retrieved from "https://hero.fandom.com/wiki/Dan_Colman?oldid=1040565"
Community content is available under CC-BY-SA unless otherwise noted.