Spending time with Sakura and Blanka

Defeat Sagat to avenge his father's murder (succeeded; though Sagat let him win out of pity)

Chun-Li (temporarily; although when he get arrested)
M. Bison
Akuma
Balrog
Vega
Shadaloo

Dan Hibiki is a character from Capcom's Street Fighter series of fighting games. Dan is consistently portrayed as an arrogant, overconfident, and utterly feeble character in many of the games he is featured in, and he is widely considered to be the comic relief of the series because of his over-the-top poses, battle cries, and overall weak moveset.

In essence, Dan is considered to be a joke character. In his most recent appearance in the home versions of Street Fighter IV, however, his moves have been slightly upgraded in order to be balanced with those of the other characters. He is an arrogant, overconfident, and utterly feeble self-taught martial artist who runs a failing dojo.

Dan's father was an unknown martial artist named Go Hibiki who challenged Sagat to a match. Go managed to deprive Sagat of his right eye, but was killed by Sagat in a fit of rage.

Motivated to avenge his father's death, Dan trained under Gouken (Ryu and Ken's mutual master) for a while, but was expelled from his dojo before completing his training when Gouken realized that Dan was motivated by his hatred for Sagat. Returning to Hong Kong, he decided to train himself and develop his own fighting style. After hearing that Sagat was defeated by a "strange Asian man" (Ryu), Dan traveled to Thailand and challenged Sagat to a duel.

After defeating Sagat (who supposedly threw the match on purpose out of pity for Dan), Dan decided to promote his fighting style under the name of Saikyo-ryu (the "Strongest style"), befriending Blanka and taking Sakura as his self-appointed student.

In Street Fighter Alpha 3, Dan was traveling the world in order to promote Saikyo-ryu. He fought in the tournament and won a few battles. During this time period he also met Sakura, and tried to convince her to learn Saikyo-ryu instead of idolizing his former master's student, Ryu. Sakura went along with Dan but was only using him to get closer to Ryu.

In Street Fighter 4, Dan was enraged that he wasn't told about the second World Warrior Tournament. He asked his friend Blanka if the audience was bored to tears since a star like him wasn't there to provide real action. Blanka told Dan that he tried to contact him but Dan hadn't paid his phone bill and it was disconnected. Sakura, still looking for Ryu, asked Dan if he had heard from Ryu (since Dan has claimed that Ryu is an apprentice of his). To keep his image, Dan said that he knows Ken Masters is rumored to be entering the next tournament, which means Ryu will probably be there to. Dan entered the SF4 tournament to spread the popularity of his Saikyo style, but barely earned enough points to qualify as a last-minute entry. In an effort to capitalize on his association with great fighters, he broadcasted a commercial for his Saikyo-ryu dojo. After no one turned up, Sakura pointed out that the commercial didn't contain the dojo's address. Dan screamed and cried for a while after realizing his mistake.

Dan appears in Super Smash Bros. Ultimate as a novice-ranked primary neutral-type spirit. When equipped, it grants three slots for support spirits, but it starts each battle with the fighter at 30% damage. His spirit battle is a stamina battle against Ken who loves to taunt on the omega form of Suzaku castle with both fighters reduced jump powers. 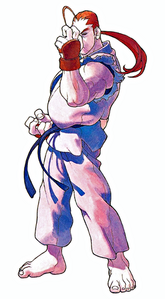 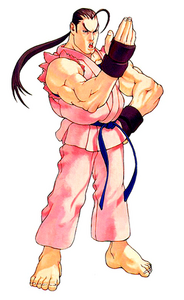 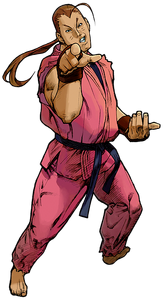 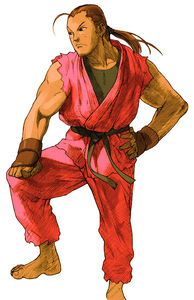 Dan's Artwork from Marvel vs. Capcom 2: New Age of Heroes 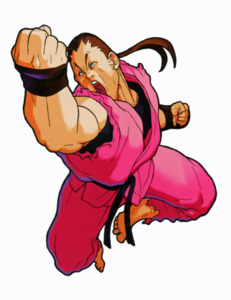 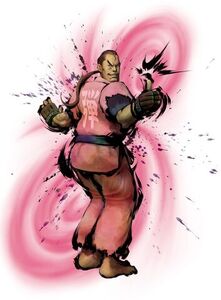 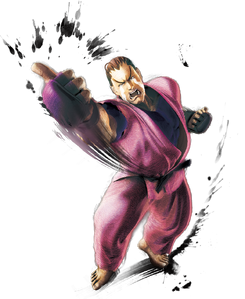 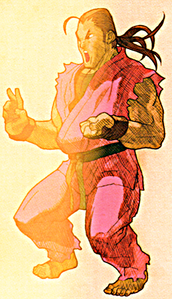