Find a cure for her unstable body (succeeded)

Danielle "Dani" Phantom is a character and superhero/sidekick from Danny Phantom. She is a younger female version of Danny Phantom, who was created accidentally by his archenemy Vlad Plasmius while he was trying to clone Danny Phantom. It was confirmed by series director Butch Hartman that in the 10 years following the series finale Dani was adopted by the Fenton family, making her Danny’s adoptive sister.

She is voiced by (renowned child now-teen) actress AnnaSophia Robb (Because of Winn-Dixie, Soul Surfer, Race to Witch Mountain, The Reaping, Charlie and the Chocolate Factory, Bridge to Terabithia) in her first appearance, and later by Krista Swan.

Vlad, desperately lonely despite his wealth, conducted a series of experiments with the aim of creating the perfect half-ghost son for himself. He tried to accomplish this by making clones of Danny Phantom, using Danny's half-ghost DNA. All of his attempts failed and all of these failed clones were mindless except one, which resulted in a half-ghost girl whom Vlad named Danielle. Vlad never faltered in showing love and affection to his "daughter," and Dani never faltered in her desire to serve her "father."

In "Kindred Spirits," Vlad sent Dani on a mission to capture Danny so that Vlad could take the DNA samples he needed for his perfect clone. She snuck into Danny's room and waited for him in her human form, reading his comic books. When he came, she introduced herself to him as Danielle, his third cousin once removed, and they quickly formed a bond despite Danny's suspicion. Later, Dani succeeded in bringing Danny to Vlad. She then found out that the "perfect clone" Vlad was trying to create was not her, but a male clone designed to be just like Danny. Together, they put a stop to Vlad's plan. Dani then leaves to travel on her own, promising to return.

In "D-Stabilized," Dani's instability finally caught up to her, which would cause her body to spontaneously melt into a puddle of ectoplasm without warning. Dani returned to Amity Park, seeking Danny's help, but instead is found by Valerie. Valerie was working for Vlad, however, and tried to use Dani as a trap to find her real target, Danny Phantom. Valerie's plan worked, and she captured Danny, while Vlad took Dani. Danny convinced Valerie to let him go to find a cure for Dani, as she was half-human and Valerie didn't want Vlad to hurt humans. Using one of his parents' inventions, Danny rescues Dani and stabilizes her body using his father’s Ecto-Dejecto. She then attacks Vlad and, after defeating him, she once again leaves to roam the world.

Dani was seen briefly in "Phantom Planet" as one of the many ghosts assisting Danny in turning the Earth intangible to save it from the Disasteroid.

As Danny's clone, Danielle shares some similarities with Danny. In her human form, like Danny, she bears a strong resemblance to her genetic mother, Maddie Fenton. She has the same skin color, eye color and hair color as Danny. She has the same hairstyle as him, with the back longer and in a ponytail. She wears a red beanie, red shorts (plain in "Kindred Spirits," and with a cameo pattern in "D-Stabilized"), a blue hoodie and shoes of the same style as Danny's but blue.

In ghost form, her skin, hair, and costume are of the same color scheme as Danny's. Instead of a one-piece suit, she wears a matching shirt-and-pants set that reveals her midriff, with no belt. The right part of her shirt is white and the left part is black, divided diagonally down, and she wears a white left glove and a black right glove. Her pants are baggy and are black with streaks of white on the sides that come down to her boots that are also white. She has the same D emblem as Danny on her chest.

Danielle shares many of Danny's likes and personality traits. Unlike the other failed experiments, she is not mindless and doesn't mind voicing exactly how she feels. A very willful and somewhat tomboyish girl, she's a lot like Danny, only more cheerful and childish. She seems to have no concern with responsibility, and can be quite stubborn at times. She can also be quite naïve, which is, in part, due to her limited existence so far.

She is about twelve years of age physically, but due to her being a clone, her actual age is possibly a few months at most. Because of her limited knowledge, Danielle is easily talked into obeying Vlad's commands, as she thought of him like a real father, and it wasn't until she met Danny that she realized that she was just one of Vlad's pawns. 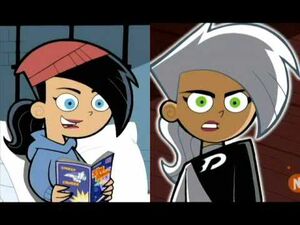 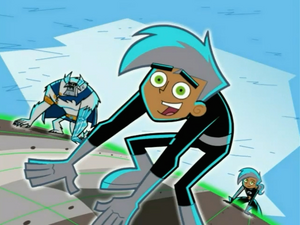 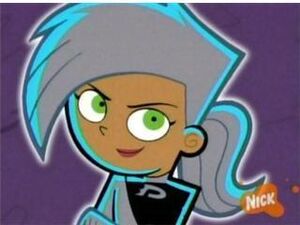 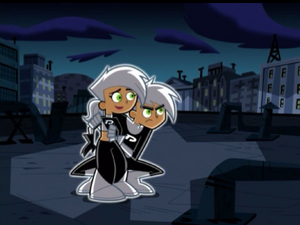 Retrieved from "https://hero.fandom.com/wiki/Dani_Phantom?oldid=2235716"
Community content is available under CC-BY-SA unless otherwise noted.