Karate Kid (but used in a derogatory way)
Danny boy

Daniel LaRusso is the main protagonist of the first three Karate Kid films. He is the son of the widow Lucille LaRusso. This event caused the two to move to Los Angeles. He wanted to learn how to do Karate after he was attacked by a boy named Johnny Lawrence and his Cobra Kai gang, who continually tormented Daniel, savagely beating him up. He later reappears in the YouTube Red TV series Cobra Kai.

He is played by Ralph Macchio.

Daniel LaRusso was born on December 18th, 1967, in New Jersey state, the only child of David and Lucille LaRusso. This happy family was shattered when David died, in 1975. At that time, Daniel was eight years old, and his father had been suffering with stomach cancer for two years. Lucille never remarried.

In 1984, Lucille accepted a job with a computer firm, in California, forcing her and sixteen-year-old Daniel to leave their native New Jersey for the beehive state. Mother and son settled in the South Seas apartment building in Reseda.

Daniel quickly befriended Freddy Fernandez, and through him, met his future girlfriend, Ali Mills, a beautiful and popular cheerleader. Unfortunately, Ali was the ex-girlfriend of Johnny Lawrence, who, along with his friends Bobby Brown, Tommy, Jimmy and "Dutch", were members of the notorious Cobra Kai karate dojo; through Johnny, they all bullied Daniel during the early part of his new life.

Things finally came to a head on Halloween night, when Daniel soaked Johnny in a bathroom toilet stall, where he was rolling a cannabis joint; enraged, Johnny and his gang pursued Daniel outside and nearly killed him, despite the protests of Bobby. However, Daniel's life was saved by his apartment's maintenance man, Mr. Miyagi, who made short work of the five bullies. Unable to make peace with the Cobra Kai sensei, former US Army Special Forces and Vietnam War veteran Captain John Kreese, Miyagi proposed to settle things peacefully, by having Daniel fight in the upcoming All Valley Under-18 Karate Tournament that December. Overconfident, Kreese agreed, but threatened to have the bullying continue, on a much worse scale, on both Daniel and Miyagi if they quit.

Daniel began to fear for his life, after seemingly being given chores by Miyagi to help him train for the tournament. The chores included waxing all of Miyagi's classic car collection, sanding the wooden floors of his house, painting his garden fence and painting his house's outside walls. Daniel tried to quit, but learned that the chores were training his arms in karate blocks, so didn't quit. The training continued, and Daniel fell for Ali, passed his driving test and celebrated his seventeenth birthday, which was the night before the tournament. As presents/reward for passing his test, Miyagi bought him a karategi, and allowed him to pick a classic car; in the end, Daniel chose a yellow 1948 Ford Super De Luxe Convertible.

Daniel does not appear in The Next Karate Kid. His role here is replaced by Julie Pierce.

For the 2010 remake of The Karate Kid, Daniel's counterpart is Dre Parker. 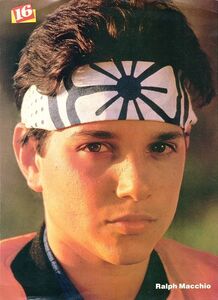 Retrieved from "https://hero.fandom.com/wiki/Daniel_LaRusso?oldid=1792513"
Community content is available under CC-BY-SA unless otherwise noted.