Killing anyone who gets in his way (formerly).

Escape from the Dixmor Asylum along with Leo (succeeded).

He was voiced by Holter Graham.

Daniel is or was a high-ranking scientist working for Dr. Pickman but was locked in a asylum named Dixmor Asylum for "killing" his own wife. He created Leo Kasper as his alternate personality only for get rid of his old life.

After a power failure, the cells are open and a huge riot at Dixmor Asylum begins, Daniel encounters a man named Leo Kasper who helps him into escaping the Asylum using brutal methods.

Ghosts (Returning to the House)

After escaping Dixmor Asylum with the help of Leo, Daniel returns to his old house and realises that a group of hunters is stalking him, Daniel kills some of them and find the house. Daniel starts to remember about his tragic past only to be interrupted by intruders trying to capture him.

Trying to remember something about his past, Daniel invades a dangerous Strip Club owned by torturers, psychopatic perverts and snuff filmers. Daniel sneaks into the club killing some perverts and entering the dungeon, Daniel finds Judy in the control room, he asks her something, but soon he mentions Leo, Judy runs away from Daniel in fear, giving Daniel a key to his safe house.

Daniel makes his way through a streets full of many gangs members, manhunters and dangerous corrupt cops.

In this mission, the player plays as Daniel's friend, Leo Kasper, he kills Michael Grant in the past and steals his key. Hunters named Project Militia are trying to kill Leo, however, Leo Kasper is shown to be more psychotic than Daniel and has no remorse for his victims.

Daniel questions Leo on killing Michael, Leo says that they were set up by Michael and he sold them out, the cops know now of who Daniel is, Leo asks Daniel, if he can change his clothes. While changing his vest, he finds a revolver and a picture of a brothel named Bee's Honey Pot', intruders invades the place where Daniel is and again the hunters are trying to capture him. Daniel makes his way through the place full of intruders and wins.

Daniel invades a brothel and kills the first person that he sees, Daniel believes that Judy is in the underground of the brothel.

Daniel has a flashback and the player plays as Leo again, both kill a project science and the Project Militia arrives to kill them, Leo makes his way killing several Project Militia Members and finally escapes through a manhole.

Most Wanted (The Bounty Hunters)

After the death of Judy in the brothel, Daniel and Leo finds another enemy, the Bloodhounds, they are bounty hunters who want to kill both of them, after a long time being chased and killing the bounty hunters, Danny escapes in the street.

Daniel and Leo find themselves near a Project Facility but this time, their enemies are mainly cops hired to project the facility from them.

Several weeks after Dr. Pickman's demise, Daniel ended up in a TV Studio owned by the project, one of the tapes show Dr. Whyte, however, bounty hunters make a return and tries to kill Daniel again.

After Daniel escapes from the bounty hunters, he find a ranch used by the project and again, he invades the ranch and kills his enemies.

Leo is being chased my murderous cops but again, Leo has no remorse with them, after killing several cops, he is stalked by the S.W.A.T itself, after succeful escaping from them, Leo breaks into Daniel's house.

Daniel mets Dr. Whyte and she shows him a video showing Leo Kasper killing Daniel's wife, is also revealed that Leo don't exist, he is a second personality controlling Daniel. Daniel prepares to fight Leo and erase him from his mind, Leo summons Dr. Pickman and Michael Grant to fight him and some scary hunters, Daniel's wife appears as a ghost and instructs Daniel of how get rid of Leo, Daniel buries Mrs. Lamb to let his mind in peace and finally kills Leo in anger. After the battle, Daniel wakes up in a long road and opens a message in front of him, the message says that his name is David Joiner, he lives in downtown of San Fierro and he will find anything he needs there, the message ends with a good luck.

The totally opposite of Personality Clash, the player plays as Leo for a final time with intention to get rid of Daniel, Daniel sends some hunters to kill Leo but every single kill make Leo stronger, Leo finally finds Daniel and have a final showdown with him, Leo kills Daniel and becomes the current personality, leading to the bad ending but later revealed to be non-canon.

A man in his thirties/late thirties, Daniel Lamb wears a typical medical greenish suit with white shoes and empty pockets near his shoulders. He wears black glasses and dark-grey gloves. There is a wild hole on the right knee and Daniel wears a bandage on his left arm. As the player kills enemies, his hands and suit take a red paint due to a splash of blood.

Daniel Lamb has a split personality; his second persona is named Leo Kasper. Although Daniel believes Leo to be real and often speaks and interacts with him, Leo is in fact just a construction of his damaged mind. Therefore, Daniel is two-sided:

At the end of the game, it is up of the player's choice to set if the original personality or the Leo Kasper one's take over Daniel's body. In the good outcome, after a fierce mental battle, Leo Kasper is eventually definitely erased of Danny's mind after Daniel realized that Leo made him killed his wife, and after his wife's "spirit" forgave him, Daniel become amnesiac, but no longer guilty or violent.

In the bad ending however, it is the Daniel Lamb's persona who is erased, which allows Leo Kasper to take control of Daniel's mind. As such, Daniel's sociopathic traits get worse, to the point of becoming a shameless, dangerous serial killer, but later revealed to be non-canon. 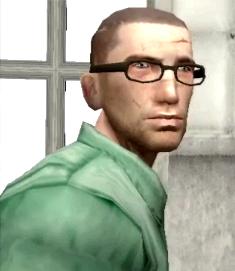 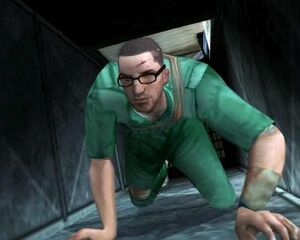 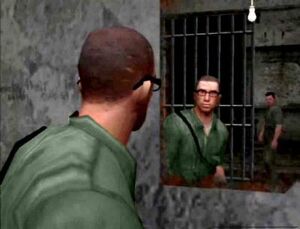 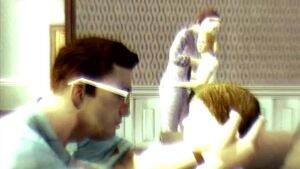 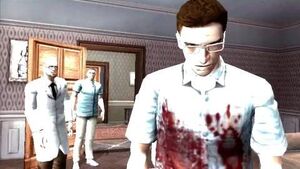 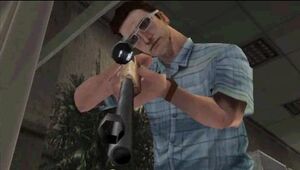 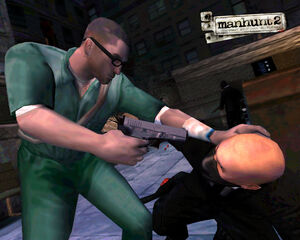 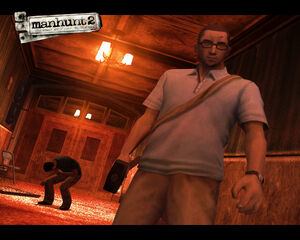 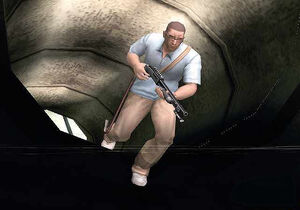 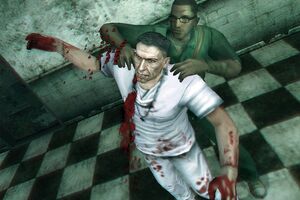 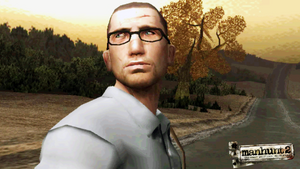 Retrieved from "https://hero.fandom.com/wiki/Daniel_Lamb?oldid=1938748"
Community content is available under CC-BY-SA unless otherwise noted.