Help Lucy be a good mother to her children

Danny Kaye is the hero of the 1964 episode, Lucy Meets Danny Kaye from the American 1960's television series, The Lucy Show. In the episode, Danny saves Lucille "Lucy" Carmichael when she gets in trouble multiple times.

He is portrayed by Danny Kaye.

Danny's personality towards Lucy is friendly, reasonable, and accommodating. He is an adult American male of Anglo-Saxon ancestry. He is five foot eleven inches tall, has prominent red hair, and is in his early fifties. In the episode, Danny is mainly in a suit due to a business lunch and the scheduled performance of his show. The suit consists of a white dress shirt, skinny black tie, black slacks, black socks, and black shoes. His underwear is boxer shorts which is full cut length with a white background decorated with blue squares.

The episode starts with Lucy being disappointed. She had requested tickets for a taping of The Danny Kaye Show but the show had run out of tickets. She promised her kids the show and felt like a bad mother because she failed to obtain tickets. Fortunately, she learns that Danny Kaye will be eating lunch at a nearby restaurant. Therefore, she goes to the restaurant to see if she can personally ask Danny Kaye for some extra tickets.

When Lucy arrives at the restaurant she is not allowed inside because she does not have a reservation. Fortunately, there is a fashion show being held at the restaurant. Lucy sneaks in by pretending to be one of the models. Every time Lucy tries to talk to Danny Kaye it ends in a disaster (Lucy destroys Danny's cigar, Lucy inadvertently makes Danny eat a wax cherry, Lucy pulls the tablecloth off Danny's table, and Lucy causes a waiter to spill soup all over Danny's head). Despite all this trouble, Danny is kind enough to explain to the restaurant staff to bill him at his hotel The Grand Plaza Hotel for all the damage and gave kind words to Lucy.

Lucy tries again to talk to Danny at the entrance of his hotel. Unfortunately, Lucy makes Danny reveal his identity. This causes a mob of teenage girls to strip Danny to only his boxers and jacket. Danny cannot walk through the hotel covered in soup showing his boxer shorts. Lucy works with Danny to dress up as the hotel's doorman so both of them can go to Danny's hotel room to talk. At the hotel room, Danny and Lucy find a way to have Lucy and her kids see the show. Danny will let Lucy be an extra on the show.

At the show, Lucy messes up multiple times on stage. She frequently interrupts Danny's monologue. However, Danny saves Lucy by incorporating her into a song and dance routine. By the end of the performance both of them receive a giant round of applause. 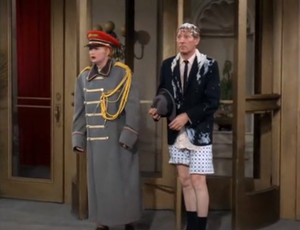 Lucille Carmichael (left) and Danny Kaye (right) helping each other at The Grand Plaza Hotel
Add a photo to this gallery
Retrieved from "https://hero.fandom.com/wiki/Danny_Kaye_(The_Lucy_Show)?oldid=1840945"
Community content is available under CC-BY-SA unless otherwise noted.