To help Miguel get back home. (succeeded)

Loyal Dimwit
Dante is a major character of the 2017 Pixar film, Coco, alongside Pepita. He is Miguel's pet dog and best friend.

Dante is extremely loyal to Miguel due to the boy's kindness earlier in the movie and the Riveras as a whole. Dante has a weakness toward food, as it led Miguel to embarrassing situations in the film. Although Dante is superficially goofy and simple-minded, it is shown that he is smarter than he looks. Throughout the film, he covertly guided Miguel to Héctor whenever the dog ran off and brought them together. However, these attempts were motivated by benevolent intentions. Dante was eager to help Miguel find who he was looking for, although being a dog, his actions came across as the dog being overly excited and random. Dante can also sense spirits and was, therefore, the only living creature to live in the Land of the Dead.

Dante's loyalty is demonstrated to be his most endearing quality. He became extremely defensive for Miguel's well-being, as he tries to stop him from finding Ernesto de la Cruz knowing that this was not best for Miguel.

Like most dogs of the Xoloitzcuintle breed, Dante is a skinny, almost hairless dog with wrinkled brown skin and long legs. He appears to be under-conditioned with a tear on his left ear, given the fact that he is a stray. He is often seen with his tongue sticking out, due to his missing teeth.

Dante first appears when Miguel greets him as the dog rummages through trash cans. The two are very close to each other and Miguel probably considers him his one and best friend. Later, Dante is with Miguel in his hiding place entirely dedicated to his passion for music and the famous singer Ernesto de la Cruz. After Miguel's family decided that he would make shoes like them, the boy overhears Dante eating an offering for the ancestors of the Riveras. The incident led Miguel to learn that his great-grandfather was a musician and, on a whim, he left his family to play guitar in the Plaza of Mariachi.

By stealing de la Cruz's guitar, he is propelled into the Land of the Dead and only Dante can see him and interact with this world. He therefore follows Miguel who wants to find Ernesto de la Cruz and negotiates an agreement with the skeleton Héctor. After an argument, Miguel continues on his way alone and Dante tries to convince him to return to see Héctor. Miguel violently pushes the dog away and insults him before going to see de la Cruz in his big mansion. But upon learning the truth about the singer and Héctor's identity, Miguel is thrown into a cave that serves as a prison for Ernesto.

Fortunately, the duo are saved by the arrival of Dante accompanied by Imelda who rides Pepita. Along the way, Dante transforms completely into the alebrije that he was in fact from the start towards Miguel. Immediately afterwards, Dante takes part in the battle against de la Cruz and his security guards and besides tears off the head of one of them. When Ernesto throws Miguel off the top of the stage, Dante tries to catch up with him and it's finally Pepita who brings him back up. Dante is last seen in the living world with Pepita in cat form during Miguel's song surrounded by his whole family. 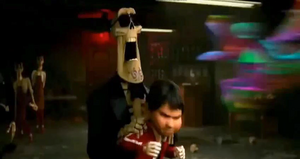 Dante tries to save Miguel from Ernesto de la Cruz.