Both Demonic and Angelic Powers

Defeating Mundus and liberate Earth from his control (succeeded)

Dante is the main protagonist in the reboot series of DmC. He is a Nephalem, born from an Angel mother and Demon father. He seeks to avenge his mother's death and father's eternal exile by taking down the Demon King, Mundus, with the help of the medium Kat and his twin brother Vergil.

He is voiced by Tim Phillips, who also portrayed Daniel Robinson.

In this alternative universe Dante is half Angel and half Demon (better known as a Nephalem) and is much different than the classic Dante. His Mother Eva is an Angel and Sparda is still a demon. Dante and Vergil lived a normal life until Mundus came and killed Eva and exiled and imprisoned Sparda for eternal torture. Dante vows to avenge his parents and rid the world of Demons.

Dante stands at around six feet and with a more rounded face, a small scar going across his right eyebrow and cheek, and wider jaw than he was in the TGS 2010 trailer, as the character model was updated to resemble the actor portraying him, Tim Phillipps, and his eye color seems to be grey-blue. His hair is black, with the sides of his head shaved, forming a mohawk out of the hair at the top of his head, tapering off into a point at the nape of his neck. As the game progresses, the hair at the back of his head can be seen changing permanently white. He also sports a strange glowing tattoo on his back between his shoulder blades. In one trailer, this tattoo glows briefly and heals scars he has on his back, and during gameplay it can be seen through his coat as he switches to an angelic or demonic weapon, which is also accompanied by a blue or red color.

His attire consists of a black, 3/4-length, hooded leather jacket with red interior linings and the British Union flag sewn on the left arm, a gray tanktop, black fingerless gloves, black faded jeans, black military boots, and a necklace reminiscent of half of the Perfect Amulet that features prominently throughout the series. His sword is slung over his back favoring his left hand, and his pistols are placed in holsters at the back of his waist, under his coat. Dante also seems to be ambidextrous, favoring either hand for melee attacks with his weapons.

When Dante uses Devil Trigger, his hair is flushed completely white, his coat becomes bright red, his eyes become red with white irises and small vein-like cracks run across his skin. These effects fade when Devil Trigger deactivates, but after his final battle his hair remained white permanently.

The new Dante's personality is similar to the original Dante's, but because of the change in setting and his past, there are a few pronounced differences in some of the ways Dante interacts with others, especially demons. Otherwise, the young man carries himself in the same slick, confident manner as his counterpart, albeit with a more vulgar and spiteful tone.

Dante is very rebellious towards authority figures, but laid-back to anyone else. Living on the periphery of society and caught between two worlds, he feels like an outcast. Young and angry, but with a quick wit and black humor, he is disaffected and disassociated with society, and quite apathetic. He has no fear, and no respect for authority, especially not the demonic authority that runs the world in which he lives. He has no qualms with engaging in debauchery and other hedonistic acts, mostly because he believes he won't be around for too much longer, because of all the demons constantly breathing down his neck.

However, Dante has a huge heart beneath all of this rough exterior. He purposely chose to live out his life his own way because his eyes were opened to evil as a child, especially when the people who were supposed to take care of him turned out to be demons. He decided to take a stand and fight back, no matter what happens. But even after all of the hatred, violence and murder, Dante would often look at himself and see if he could call himself human, going so far as to rip his chest open to see his own heart. He just knew that he had to convince himself he wasn't insane. Dante displays a more caring side to his female associate, Kat, telling her to leave him and find safety when they come under attack, and even risking The Order's plans to save her life. 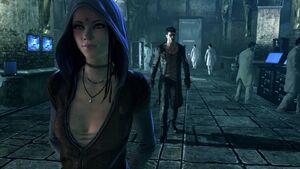 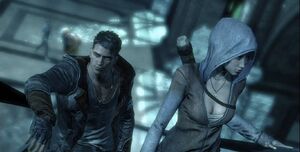 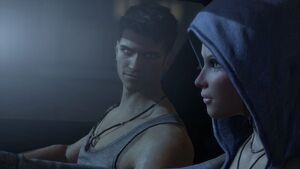 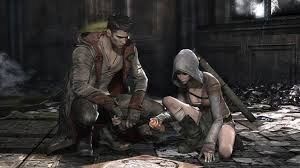 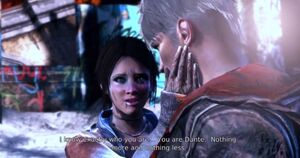 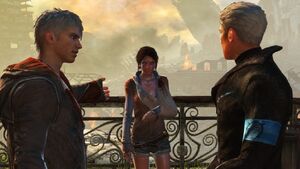 Dante with Vergil and Kat. 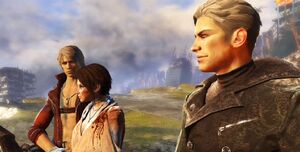 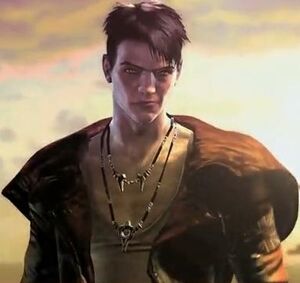