Daria is new character appears in Alpha and Omega: The Legend of the Saw Tooth Cave.

She is voiced by Gina K. Bowes.

She is grey and white wolf with pale green eyes.

Daria is very kind and very loyal especially towards her new good friend Runt. Daria can be a bit timid around strangers but she is very polite and a bit formal to a certain extent for example; saying 'yes' instead of 'yeah' or how she introduced herself to Winston and Eve by saying "My name is Daria.". Daria is unusually happy considering how she found out that her mother died which hurt her a lot, but Lois saying "But I want you to know, she loved you, she vowed to protect all of us.", made Daria feel a bit better when she responded with a nod "I needed to hear that". Other than that ever since Runt convinced his grandfather Winston to let Daria join, she was happy. 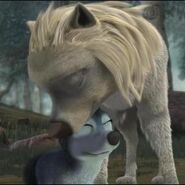