Destroy the Abomination (all succeeded)

Dark is an Elite Predator and the main protagonist of the Predator campaign of the 2010 videogame Aliens vs. Predator. He is a new Elite Predator who is sent to BG-386 in response to a distress call from a young blood pack. Upon arriving on the planet, Dark was too late to save the Youngbloods or his fellow Elites, and he was promptly ordered to recover the technology Weyland Yutani had stolen. At the climax of his journey, he battled the Abomination in the underground arena underneath the Pyramid before finally killing it and throwing it into the lava below. Returning to his vessel, Dark was honored by the other Predator elites for his actions on the planet, before departing for the Xenomorph homeworld.

Little is known of Dark's early life. However, he clearly was an extremely skillful Youngblood among the Predators given that he was offered to join the Elite Predator clan, which only made offers of recruitment to the best Youngbloods in Predator society. Meeting with his Elite overseers to determine if he was truly worthy to join their clan, Dark leapt into the pit where he would be tried. Looking at the three Elites to begin, the Elites immediately unleashed multiple Xenomorphs (known as the Serpents to the Predators) at Dark, but the Youngblood managed to kill them all. During the fight, Dark was injured, and was forced to use a health shard to heal himself. He then recovered two more health shards, and a plasma caster. Dark briefly used the weapon, and was informed that while his energy needed for using the plasma caster and mines would recharge in the arena, in an actual hunt, he would need to use power sources or be more crafty. After a few brief test shots at marked statues, the Elites unleashed multiple Xenomorphs on the Elite, with Dark being given the go ahead to use all methods to kill the remaining creatures. Dark took his first trophy as an Elite as part of this battle, and the Elites hoped it would be the first of many. After killing all of the remaining Xenomorphs, the Elites congratulated Dark and declared him as an Elite. They then informed him of a distress signal from a Young Blood pack on BG386 and declared they must answer it. Dark jumped out of the pit and rejoined his fellow Elites, where they then departed aboard their cruiser for the planet.

Dark's clan arrived on BG386 in a cruiser and immediately destroyed the USS Marlow deploying the Colonial Marines on the planet. Once arriving, the clan learned of the size of the Xenomorph infestation, and Dark was sent with two other Elites to the planet to rescue the Youngbloods, end the infestation and recover the technology stolen by Weyland Yutani. Dark arrived in the jungle and rapidly cloaked himself to hide himself from the Marines. Listening to a conversation of Marines, Dark was informed by Spartan, the clan leader, to kill the humans for violating their sacred grounds. Dark killed the two Marines and moved up to the sentry gun. Dark used his vocal mimicry to be able to lure the Marines out of the sentry gun's range and then killed them, destroying the laptop to deactivate the gun, before draining the power source and opening the blast door. Dark then came across one of the Youngbloods, killed by the Xenomorphs. Ordered by Spartan to destroy the Youngblood's body to prevent the technology from falling into human hands, Dark set the Youngblood's wrist bracer to self destruct. Dark then fought his way through the Xenomorphs in the jungle to Gateway complex where a temporary lapse in the electric fence allowed him to enter the compound. Dark killed all the marines, then opened the main building by cutting the power, killing everyone inside, and decapitating the commanding officer to use his head to bypass retinal scanners. Dark destroyed the controls for the sentry guns and the electric fence, allowing Xenomorphs to enter the compound. After killing them, Dark used his trophy to bypass the retinal scanner and entered the marshes. Dark learned of another Youngblood corpse captured by the humans on the other side of the marsh, and was explicitly advised not to enter the water, as his cloaking device would malfunction. Dark killed the marines patrolling the swamp, then made his way to the building where the Youngblood's corpse was being held, killing the Marines guarding it. Dark destroyed the Young blood's corpse and took his mines, and the explosion immediately attracted the attention of the Marines and the Xenomorphs. Dark was immediately informed to make his way to the main human building, the Refinery, and upon arriving, caught a glimpse of the Abomination as it removed the head of a colonist.

Dark arrived at the Refinery, the heart of the Xenomorph presence on the planet. He noticed the Abomination roaring at him before he attempted to find a way into the building. Using the maintenance tunnels and elevator shafts, Dark entered the building, repeatedly being forced to kill Marines in order to proceed. As he drew nearer, he was ordered by Spartan both to discover what had happened to the other Elite Predator who had gone out of contact, and to kill the Matriarch. However, the Matriarch was dead, having been killed by Rookie shortly beforehand. Dark then left the Matriarch's chamber, and upon discovering the Elite Predator's corpse, set his body to self destruct while salvaging his disc thrower. Dark was given orders to find and kill the Abomination, as it was a sacrilege to the Predator species. Dark then escaped the collapsing Refinery.

Journey through the ruins

Dark escaped the refinery and entered an underground Predator temple. Spartan called Dark blessed, for no Predator had walked in the temple halls for centuries, before revealing to Dark an ancient Predator was buried on the planet and was explicitly instructed to find his mask. After navigating through several Predator riddles, Dark found the secret room where the mask was stored. Dark removed his original mask and then proceeded to put the old mask on. Dark then witnessed several holograms of the ancient Predators as the mask had memories of those old days. The mask also possessed the ability to see Xenomorphs, and Dark had a much easier time fighting the creatures. Dark was next instructed to go after the old king's wrist bracer, but he discovered it missing. A Weyland Yutani message alerted Dark to the fact the humans had it, and Spartan gave Dark the location of the research lab complex where the wrist bracer was being held. Dark then made his way through the ruins, having to massacre his way through several Marine squads and Xenomorph hordes, before coming upon an ancient combat arena. Upon entering the arena, the door slammed shut and a Praetorian revealed itself. Its aggression and height quickly resulted in Dark realizing a head on fight was suicide and he promptly headed to the towers. He repeatedly weakened the creature with his disc thrower, before finally managing to stab the Praetorian for a fatal blow. The Xenomorphs fled upon the death of the Praetorian, and Dark retrieved a Combistick on his way to the labs.

Dark arrived at the research labs shortly after, and witnessed several combat androids executing several staff members to cover up Weyland's crimes. Sickened, Dark proceeded to kill all the androids, easily using his Combistick to destroy the androids with ease. Dark then killed the Weyland Yutani security officer to get his head to bypass retinal security, and then rode the monorail into the main complex. After destroying the androids guarding the monorail station, Dark attempted to enter the security station, but was trapped by Weyland, who intended to take him alive as a slave to enlist his assistance with the pyramid. Dark escaped the trap, then destroyed the security system. Ascending to the labs proper, Dark's destruction of the security set off a chain reaction that destroyed the power in the facility and caused the Xenomorphs recaptured by Weyland Yutani to break out. In the midst of the chaos, Dark retrieved the Wrist Bracer, then headed for the elevator to the pyramid. Weyland, desperate to prevent Dark from destroying the pyramid, sent in several of his personal guard androids armed with cloaking technology. Dark, aware that they could not hide their heat signatures, managed to destroy all the androids, then descended to the pyramid.

Destroying the Pyramid and Defeating the Abomination

Dark arrived in the pyramid and witnessed the Predator king being buried with the Matriarch. Dark was then stunned to learn from Spartan that Dark was the king's direct descendant. After fighting his way through a swarm of Xenomorphs, Dark activated the three switches to his ancestor's sarcophagus, killing the Xenomorphs and combat androids that interfered. Spartan ordered Dark to set the wrist gauntlet to self destruct, in order to protect their secrets from Weyland Yutani. Dark did as instructed after bowing before the tomb of the ancient king, and then turned to leave.

Just then the Abomination appeared and tackled Dark to the ground into an arena filled with lava. Dark was almost killed, but quickly shot the Abomination into the lava with his plasma caster. The Abomination rapidly resurfaced, and an epic battle between the two began. The Abomination proved to be a durable opponent, forcing Dark to rely on all of his strength. After failing to beat Dark in hand to hand combat, the Abomination tried to bring the roof down on the Elite Predator, which made the platforms unstable and caused the lava to rise. Despite the best efforts, Dark finally killed the Predalien and called in his ship for a rendezvous. Hauling the deceased creature out of the arena to the roof of the exploding labs, Dark lifted the Abomination above his head, uttering a roar of triumph, before throwing the creature back into the lava below. Dark then boarded the ship, where the other Elites, shocked at his accomplishments bowed to him in respect. Dark then recovered the coordinates to the Xenomorph homeworld, planning to take the Elites there for a new more grander hunt.

Being a Predator, Dark was extremely driven by honor. This was emphasized by the fact he would decloak whenver he entered hand to hand combat. His dedication to honor was so great that when he arrived on BG386, he immediately set his wrist gauntlet to blow up in the event he died on the planet. Dark also cared deeply for his fellow Predators, repeatedly stroking the heads of the three deceased Predators he came across before he destroyed their bodies. Dark deeply respected the Xenomorphs and humans, seeing them as worthy adversaries and never underestimating them, and being deeply disgusted with Weyland Yutani's defiling of the ancient Predator grounds. Dark was also clearly sickened upon witnessing the combat androids execute Weyland Yutani employees to cover up Karl Bishop Weyland's actions on the planet, letting out a furious growl over the event. 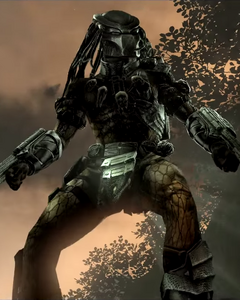 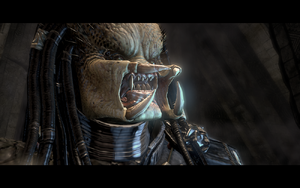